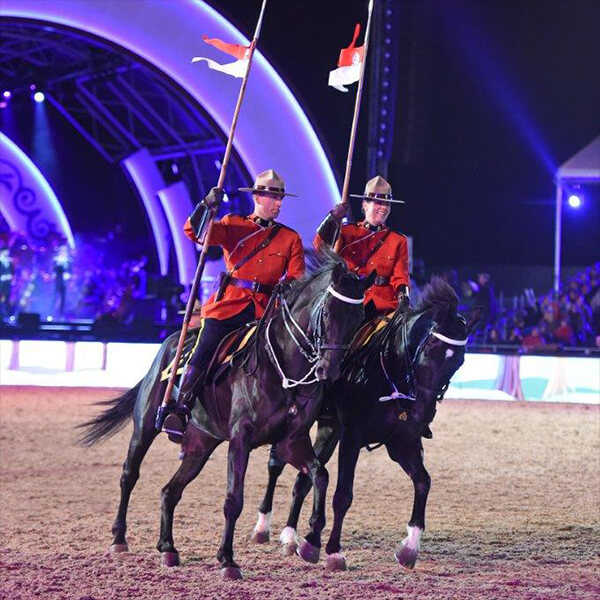 Matthew Quilley has made three tours throughout North America and Europe during the four years he has spent with the RCMP’s Musical Ride. “But I can say without a doubt that the Royal Windsor Horse Show in England is the most memorable place I will have ever shown,” the 2007 grad of the college’s Criminal Justice program said.  “It helps that we met the Queen!”

Not only did Quilley meet Her Majesty Queen Elizabeth II in May 2016 during her 90th birthday celebrations at the horse show, but he presented her with a horse from the Musical Ride’s breeding stock, a tradition which has spanned most of her reign. The Windsor Horse Show was just one stop on the Ride’s 18-day tour of England.

Quilley, whose brother Derek was a 2003 Criminal Justice grad as well as a past member of the Musical Ride, recently found out he would be staying with the Ride throughout 2017. “And it is going to prove to be a big one –a cross-Canada tour for the 150th Anniversary,” he said. “I love my job!”

I like this building because I think it is going to be an inspiring and interactive place to learn.

Dale Krall may be an electrical engineering grad from the University of Alberta, but in his work as an associate at SMP Engineering, he finds he regularly draws on the skills he learned in Lethbridge College’s Electrical Apprenticeship program.

“I learned a lot of what is actually needed to build a building during my time in the trade,” he says, “and I think that makes our designs better. The way we lay buildings out, the way we circuit them is far more realistic. We are constantly thinking of how the electrician will construct it on site.”

Krall, who graduated from the college in 2007, is thrilled to be working on the new trades and technologies facility at his alma mater. “The project is wonderful,” he says, “for Lethbridge and for the whole province. It’s a very impressive project for Lethbridge – but for all of Alberta too.” The aesthetics of the building matter to Krall. “It’s important that buildings are not just cubes where you go and learn skills,” he says. “I like this building because I think it is going to be an inspiring and interactive place to learn.”

Ready for the next step?

Choose from over 50 career-training programs, applied degrees and apprenticeships, or speak with an Academic Advisor to help with your pursuit of career and academic goals.