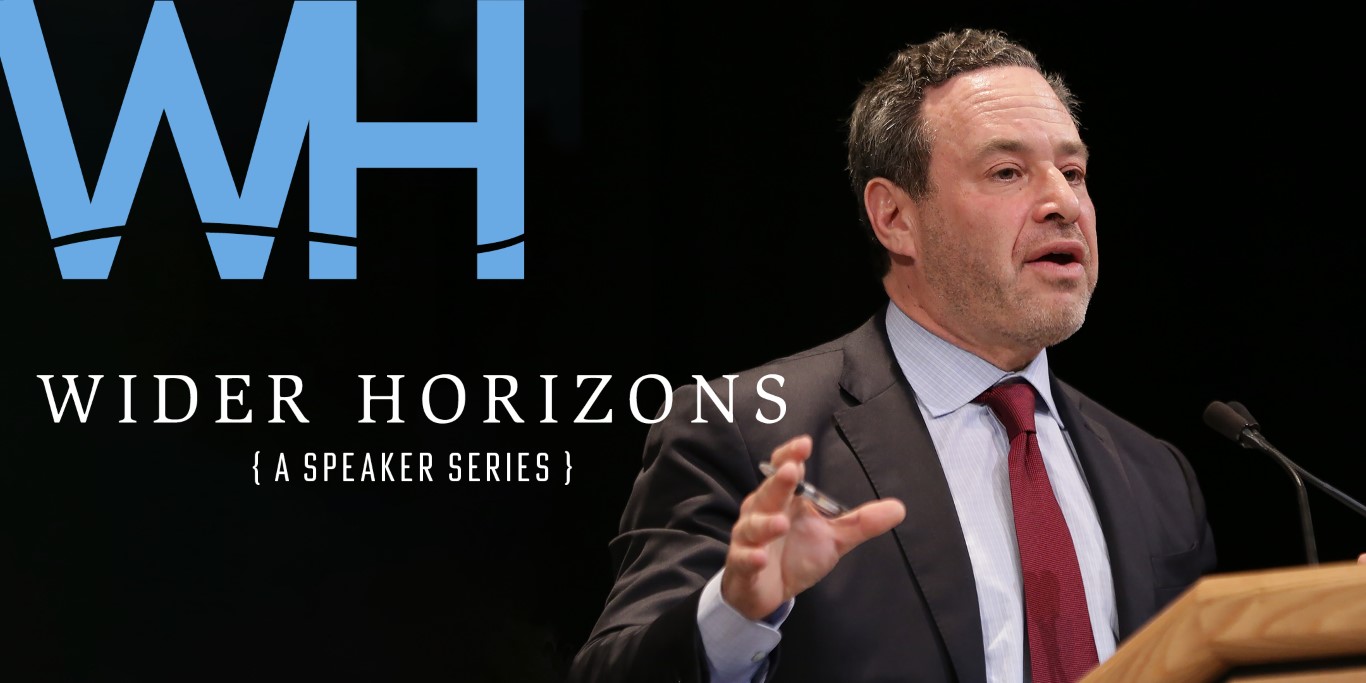 Lethbridge College has arrived on the speaker series circuit as Wider Horizons: An evening with… will launch in April. Bestselling author David Frum, who served as special assistant and speechwriter to former United States President George W. Bush in 2001 and 2002, will be the speaker at April’s inaugural event. The series will take place annually and is made possible by a $100,000 gift from Bruce McKillop, announced Friday morning at Lethbridge College.

Frum will speak on the rise of populism in politics at a ticketed evening event open to the entire southern Alberta community on April 3. He will also offer a separate session with students from the Centre for Applied Arts and Sciences on April 4.

“The Wider Horizons: An evening with… series will help us to elevate and join discussions that directly align with our academic areas,” says Dr. Paula Burns, Lethbridge College President and CEO. “We will pursue speakers who are experts in their fields and bring a unique viewpoint to their talks. As an institution of higher learning, we can elevate and illuminate the academic rigour of our college by provoking thought and questions from our community.”

Originally from Toronto, Frum is a writer at The Atlantic and the author of the 2018 New York Times bestseller, Trumpocracy: The Corruption of the American Republic, his ninth book. In 2001 and 2002, he served as special assistant and speechwriter to President George W. Bush during and after the Sept. 11 attacks on the United States. He is a sought-after political commentator as a conservative Republican who is an outspoken critic of President Donald Trump. 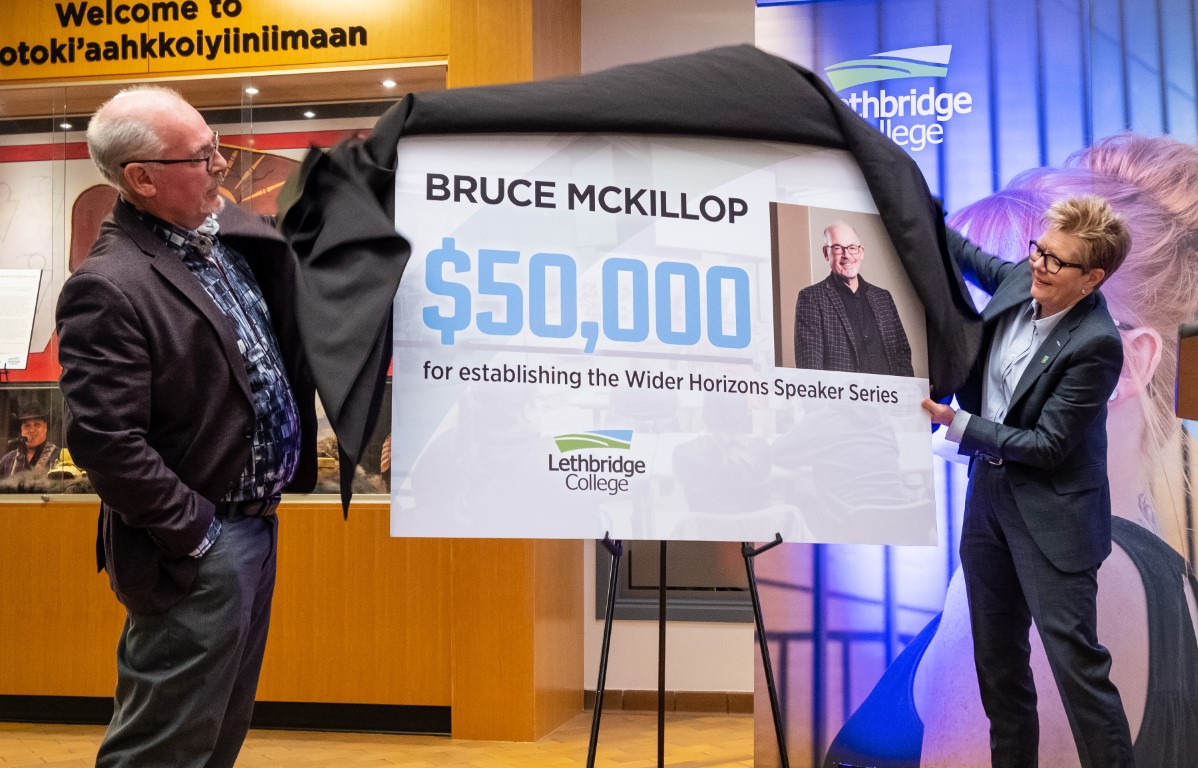 The Wider Horizons: An evening with… series is made possible thanks to a $100,000 gift from long-time Lethbridge businessman and philanthropist Bruce McKillop. The owner and operator of McKillop Insurance and Registry Services for more than 45 years, Bruce took over the business from his father, Bud, who founded it in Lethbridge in 1953. Now retired himself, Bruce has turned over the reins to his daughter, Sonya, making it a third generation family business.

Bruce McKillop is an alumnus of the University of Lethbridge from the time when the institution was located on the Lethbridge College campus. He stresses the value of supporting all post-secondary education in the city and wanted to help highlight the educational choices at the college.

“The college has so many different types of programming, from business to justice, communications to design, and I think it’s important to elevate the recognition of those programs, and what the college can provide as a whole,” says McKillop. “The speaker series aligns with that vision and I’m excited to see how it grows and supports academics at the college.

“I had a good career and Lethbridge supported me,” he adds. “I’m fortunate to be in a position where I’m able to give back, and I think this is a great way to do that.”

The Wider Horizons: An evening with… community speaker series will celebrate diverse stories and perspectives from world-renowned speakers. This series aims to educate its attendees, engage the community and provide opportunities for thoughtful dialogue on issues important to our students and community in a small, intimate setting that provides a unique experience for participants. 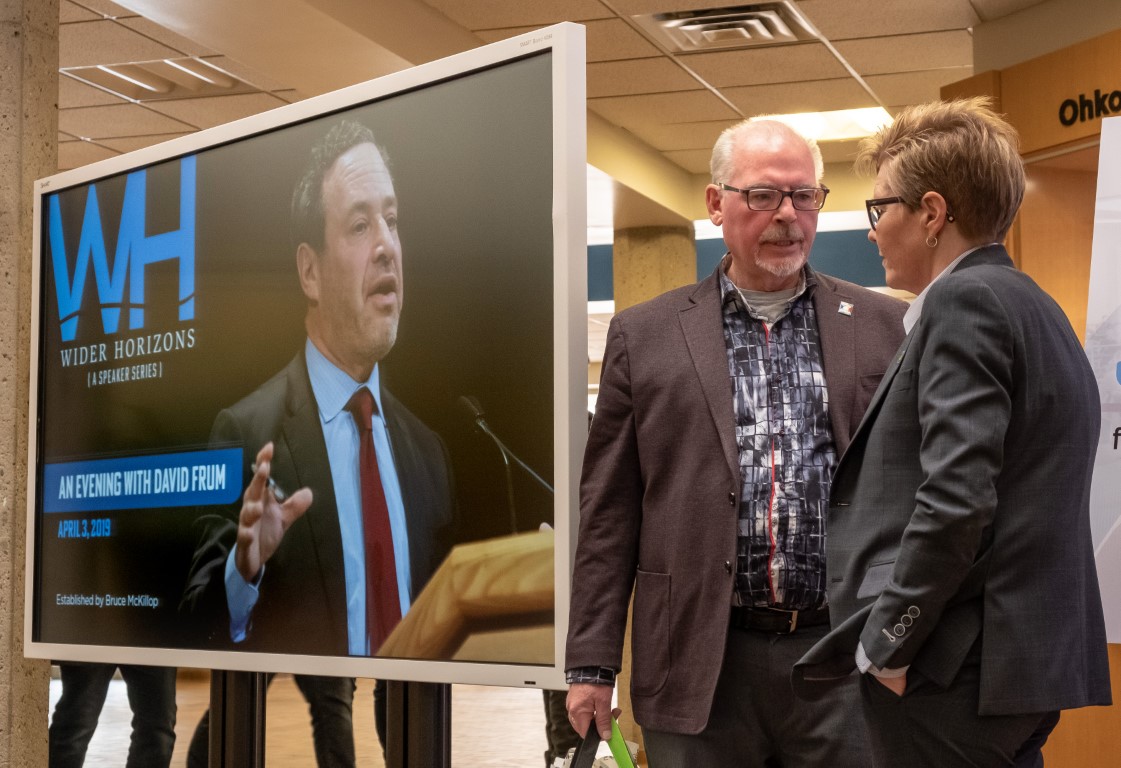 “We’re thankful to Bruce McKillop for stepping forward to make this project a reality,” says Dr. Burns. “He believes in a culture of philanthropy and finding ways to support initiatives he believes in, which is an example to the entire community.”

The naming of the speaker series builds off the reputation of the college’s award-winning Wider Horizons magazine, which for a dozen years has shared thought-provoking and inspirational stories of Lethbridge College people, places and ideas with the college’s the vast network of alumni, community and industry supporters.

Tickets for Wider Horizons… An evening with David Frum are on sale now. Quantities are limited and can be purchased through the Lethbridge College website. Tickets are $25 for the general public and $20 for Lethbridge College students and alumni. 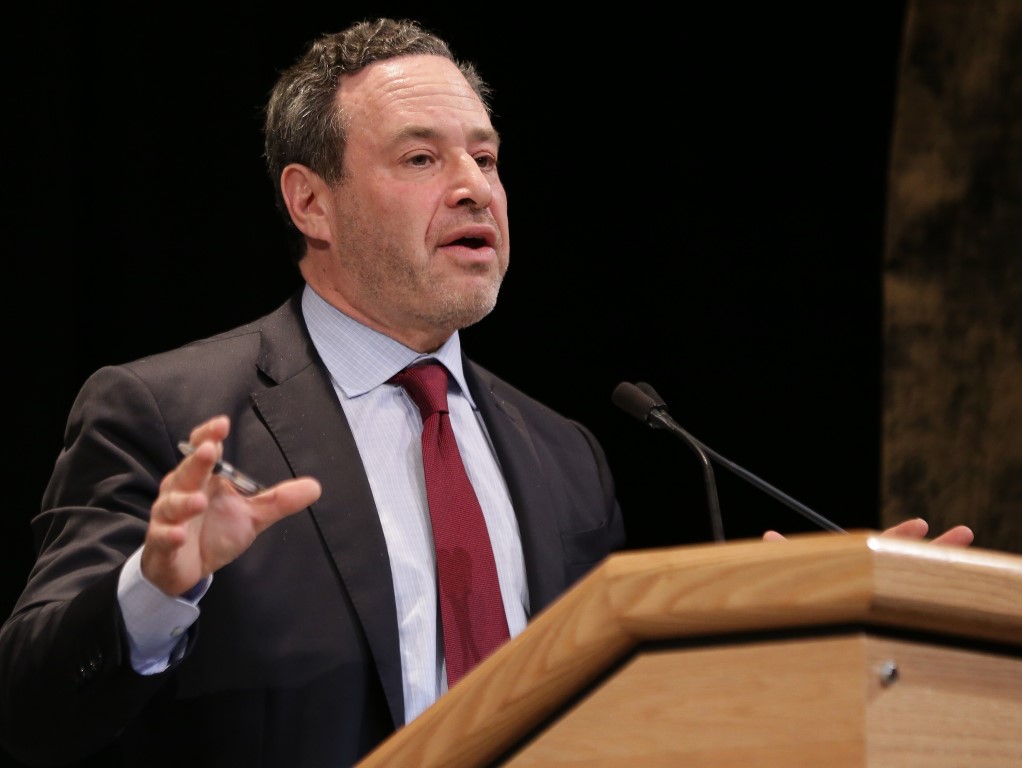 David Frum is a senior editor at The Atlantic and the author of the 2018 New York Times bestseller, Trumpocracy: The Corruption of the American Republic, his ninth book. In 2001 and 2002, he served as special assistant and speechwriter to President George W. Bush during and after the Sept. 11 attacks on the United States. Frum is a recognized intellectual leader of the American conservative movement.

Some of his earlier works include Dead Right, described by Frank Rich in the New York Times as “the smartest book written from the inside about the American conservative movement” and The Right Man, a memoir of Frum’s service in the George W. Bush administration, which was a #1 New York Times bestseller.

Frum has served as a fellow at the American Enterprise Institute, as a trustee of the Republican Jewish Coalition, and as chairman of the board of trustees of Policy Exchange, the leading center-right think tank in the United Kingdom. A native of Toronto, he was a driving force in the "Winds of Change" movement that reunited Canada’s splintered Conservative party in the early 2000s. From 2009-12, Frum created and edited the FrumForum group website devoted to the modernization of the Republican party. More than a dozen young writers who started their careers on Frum's site have gone on to success in politics and journalism.

Frum appears frequently on CNN, MSNBC and the Australian, British and Canadian Broadcasting Corporations. A profile in Esquire in December 2017 described Frum as "first among equals" in the conservative anti-Trump movement. A documentary based on Frum's life and work will premiere at the SXSW Festival in Austin in March 2019.

Frum earned a BA and MA in history at Yale, then a JD at Harvard, where he served as president of the Harvard chapter of the Federalist society. He taught history at Yale in 1986-87. Frum is now at work on his tenth book, about how to renew American world leadership after Trump.