Lethbridge College has gone back to basics for its outdoor play space. Located in the heart of the college’s campus, a yard is being converted to a state-of-the-art outdoor play environment this summer. This renovation was made possible through the vision and dedication of Early Childhood Education leaders on campus and the support of a dozen industry partners in the community.

The play space renovations at Lethbridge College support recent research around the development of children in the areas of outdoor, risky and loose parts play. The space is used by the Hands-On Early Learning Centre, which provides daycare services to children of college students, staff and community members, and it is tied to curriculum in the Early Childhood Education (ECE) program. The renovations also provide a site for future approved Applied Research and Scholarship of Teaching and Learning activities.

Changes to the play space include:

This new play space provides an unprecedented opportunity for the children to have true outdoor play experiences. It also allows for ECE students to see first-hand the effect of such a space on children’s development.

How the project has already changed the way children play

“Everything changed that first week. The children learned they needed each other.”
-Sheena Vogt

The way children play is critical in their social, mental and physical development. The first step in the theory of experiential play and changing the way young children learn was to remove all plastic toys and introduce loose parts. Before making this change during the 2017-2018 academic year, the early learning center educators noted that the children, for the most part, played independently, without speaking or interacting with each other in any significant way.

Some of the changes educators saw once they introduced the loose parts included:

With these results so far, the college expects a fully implemented experiential play space to produce trends and proficiencies in the way children interact, learn and cope with emotional stimuli at a young age. This could benefit children throughout their lives.

The Alberta government has recently developed an Early Learning and Child Care Curriculum Framework for Alberta, which is heavily grounded in experiential learning. This framework guided the college as it crafted and planned for the new play space.

The inspiring outdoor play environment at the Hands-On Early Learning Centre not only enriches children’s learning experiences, but it also expands opportunities for the faculty members to conduct applied research. These research opportunities can enhance the quality of children’s outdoor play, strengthen relationships with industry partners and promote college students’ participation in future research projects.

Educators and researchers at Lethbridge College are eager to use this experiential play space to teach students in the ECE program the importance of experiential learning for children. The greatest impact of this social innovation is the research component and the knowledge that will stem from research in this area to influence policy and the future of early childhood education across Canada. The children who attend the Hands on Early Learning Centre will use this space each day and their outdoor play experiences will be documented over time.

By establishing this demonstration site on outdoor play, Lethbridge College has become the only post-secondary institute in Canada to have a nationally recognized, certified outdoor play space for teaching, learning and research.

“One of the children was very excited about the tires – he explained to me how they used them to hide in and how they rolled them around.  He also talked about building a campfire and toasting ‘smarmellows.’ He was covered in hay and mud – which I thought was cool. From his explanations and my observations it is clear that there appears to be more playing together, creating together and more discussion and problem solving – which are some very useful skills for all aspects of their lives now and in the future.”
-Nancy Russell, Manager Student Engagement and Retention

Lethbridge College has delivered ECE programming to students for over 35 years. Recent efforts in this area include: a symposium hosted by the college in December; two faculty members who joined a research excursion to Scotland in February to learn more about the practices in that country; hosting the college’s first pop-up loose parts playground; and a conference for industry professionals in March. 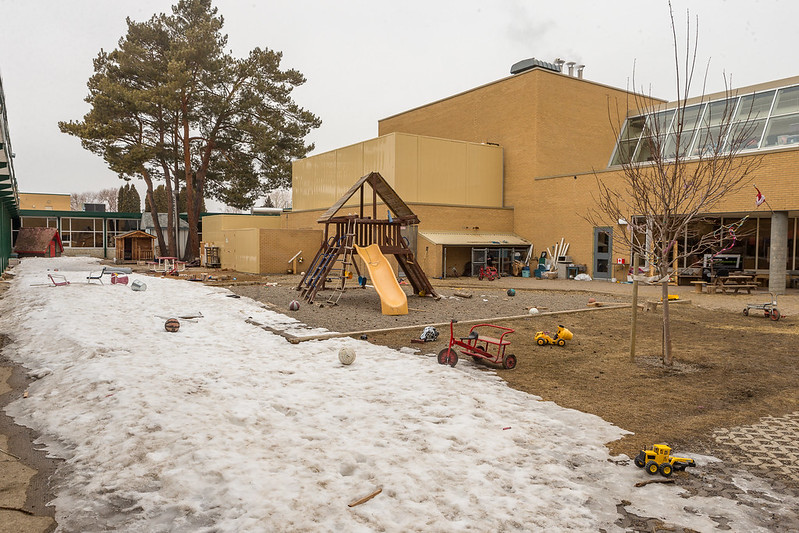 Thirteen community partners from the construction industry donated time, supplies and expertise to create the play area. Having so many partners as a part of this project has been very rewarding as they, too, see the tremendous value of this opportunity.