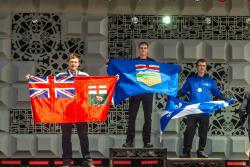 “Nathaniel is the best of the best,” says Frank Lehniger, who has been a Heavy Equipment Technician instructor at the college for eight years. “We have never had a national champion in our school before. He would come in after work two to three times a week to spend time practicing and preparing. We would go through items to make sure he understood what we were doing. I have never seen anyone work so hard.”

At the national competition, deWilde competed against 11 other gold medal winners from across Canada. The competitors were given a variety of heavy equipment – semi-trucks, excavators and more – that had problems or faults, and they were asked to diagnose the problems and write up the work order needed to adjust it in a limited amount of time. They completed engine adjustments, transmission and powertrain diagnostics, and air conditioning problems, and then were judged on how many problems they solved, their solutions, and how well they followed proper procedures, with safety being a priority.

“Working with equipment has been a lifelong love for me,” says deWilde, who now works at Transwestern Truck Centre in Lethbridge as a heavy equipment service technician. “As a little kid, I would help my dad and grandfather on the farm constantly and just knew this is what I was going to do when I grew up. Going to school at Calvin Christian, where the career technology studies program is exceptional, also deserves credit in my achievement.”

DeWilde says that while his goal was to return from the national competition with a medal, it still was a surprise. “To be honest, I didn’t think I would get a medal,” he says. “I didn’t hear anything after they called my name – it was just incredible.”

To prepare for this year’s provincial and national competition, Lehniger said that he and deWilde looked at deWilde’s strengths and weaknesses and then turned to the entire staff in the Crooks School of Transportation at the college to give him extra time and teaching support. “I drew on a lot of resources here at the college,” Lehniger says. “Whenever I needed anybody to help, other instructors were instantly ready and made time for him. It was a combined effort of the whole school.”

Lehniger also reached out to local equipment dealers whose equipment would be used in the competition. At the provincial level, competitors knew they would be working with Caterpillar equipment, so Lehniger contacted Brent McDowell at Finning Canada in Lethbridge to arrange for deWilde to spend time familiarizing himself with that particular equipment. After qualifying for nationals and learning the competitors would be using John Deere equipment, Lehniger contacted Rusty Oberten at Brandt Tractor in Lethbridge so deWilde could get to know the ins and outs of that equipment.

“This is a great success story that exemplifies the hard work of Nathaniel, the quality training our folks are providing and the generous support of our industry partners,” says Dennis Sheppard, Dean of the Centre for Applied Management at the college.

“And it couldn’t have happened to a nicer guy,” adds Lehniger. “It was a pleasure working with Nathaniel – it doesn’t seem like a job when someone has such a good attitude.”

Skills Canada was founded in 1989 as a national, not‐for‐profit organization that works with employers, educators, labour groups and governments to promote skilled trades and technology careers among Canadian youth. The Skills Canada National Competition is the only national, multi-trade and technology competition for students and apprentices in the country.

This year, the competition was held May 26 and 30 at Prairieland Park in Saskatoon, Sask. The event tested the best and brightest students from across the country who were measured against exacting industry standards in the skilled trades. The event provided competitors with an opportunity to further develop their skills through hands-on competition with their peers, and the distinction of being named the nation’s best in their chosen field. DeWilde says he “would encourage anyone who can to try hard for these competitions. They are an awesome experience and a chance of a lifetime!”

More than 500 young people from all regions of Canada competed in more than 40 skilled trade and technology contests. Competitors all underwent demanding local and provincial competitions to qualify for the Skills Canada National Competition.