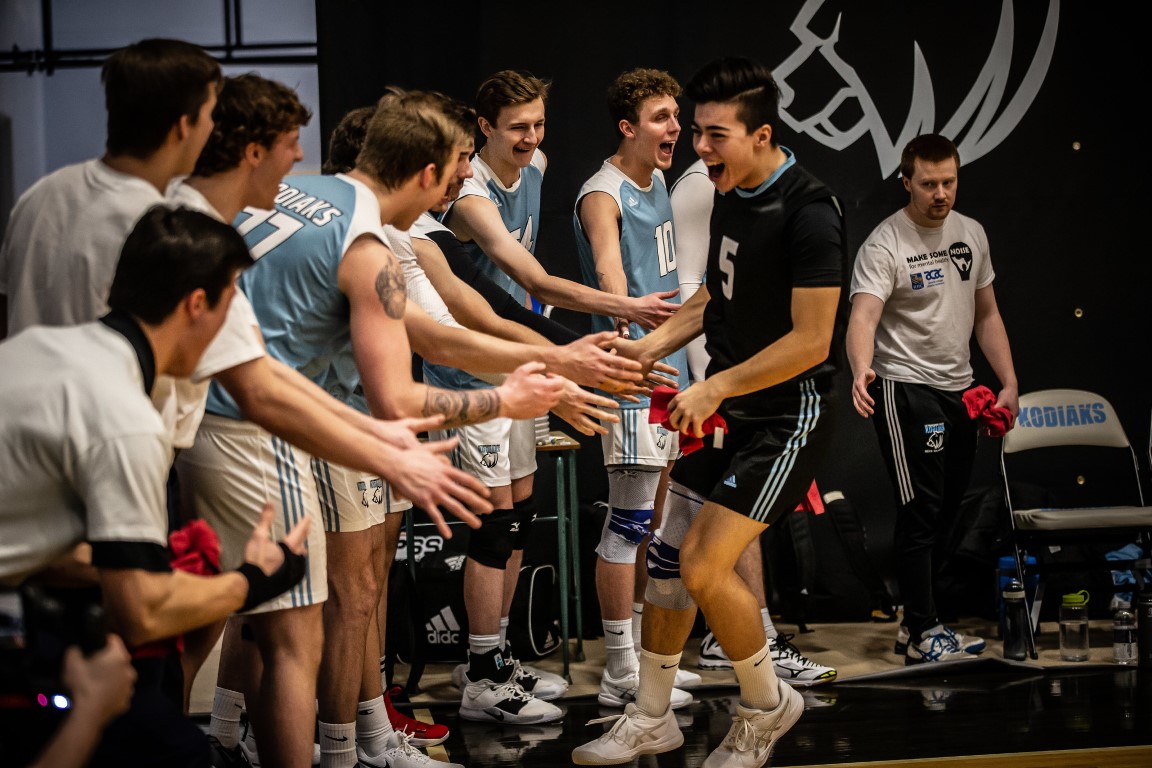 Last season, the Lethbridge College Kodiaks men’s volleyball team played in an ACAC championship game for the first time in program history. They settled for a silver medal, but now have their sights set on gold. And when they hit the court, they’ll have home court advantage to help in their quest.

“Kodiaks Volleyball is excited to showcase our sport this weekend in front of the great crowds in southern Alberta,” says Kodiaks head coach Greg Gibos. “This group of athletes has been so dedicated to growing the game in Lethbridge, and I’m excited they will get to compete in such an amazing atmosphere. We can’t wait to get the tournament started and to compete against the best teams in the conference.”

The first action for the Kodiaks will be at 8 p.m. on Thursday when they face the Lakeland College Rustlers in an ACAC quarterfinal. The Kodiaks clinched first place in the ACAC south division with a 20-4 record, tying with NAIT and Red Deer College for the best record in the ACAC. The Kodiaks enter the championships in second in the CCAA national rankings.

The Kodiaks bring a mix of veteran experience and youthful enthusiasm into the championships. The team is led by fifth-year right-side hitter Carter Hansen (fifth year, General Studies, Lethbridge) who broke the ACAC all-time kills record this season and will retire with 1,370 regular season kills, which is 203 more than anyone else in conference history. Hansen finished second in kills per set in the conference this season, averaging 3.69. 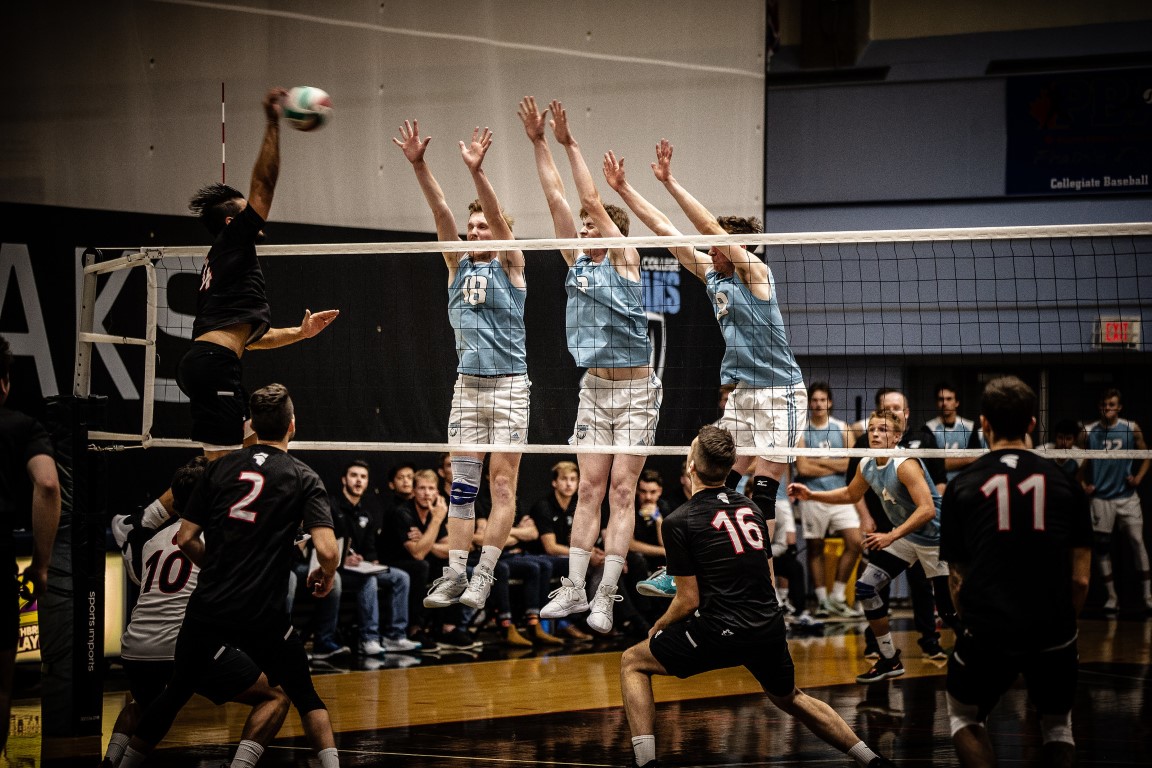 “It’s exciting to not just host the men’s volleyball championship for the first time ever, but have a host team that has a legitimate shot at a championship,” says Todd Caughlin, manager of Kodiaks Athletics. “We are excited to once again showcase to the entire ACAC what we are capable of as hosts of a major championship. We have exciting events planned that will make the Val Matteotti Gymnasium the place to be in southern Alberta this week.”

The first 250 fans into the Val Matteotti Gymnasium for the Kodiaks game against Lakeland College on Thursday night will be able to “wear the bear” as they will receive limited edition Kodiaks shirts courtesy of Co-op. All fans are encouraged to wear white to support the Kodiaks.

The Kodiaks will also honour the 2019 CCAA women’s cross country national championship team, as they will receive championship rings between the second and third sets of the Kodiaks game.

Tournament action begins at 1 p.m. on Thursday, Friday and Saturday. Quarterfinals take place on Thursday, semifinals are on Friday and the medal round games are on Saturday, with the ACAC gold medal game at 5:30 p.m.

General admission tickets are $40 for a tournament pass or $15 per day. Seniors (65+) and alumni passes are $25 for the tournament or $10 per day. Lethbridge College students and staff are admitted free with I.D. Other post-secondary and high school students can get in for $2 per day with their student I.D. cards. Children under 12 are free.

The full tournament schedule and much more information is available on the championship webpage. 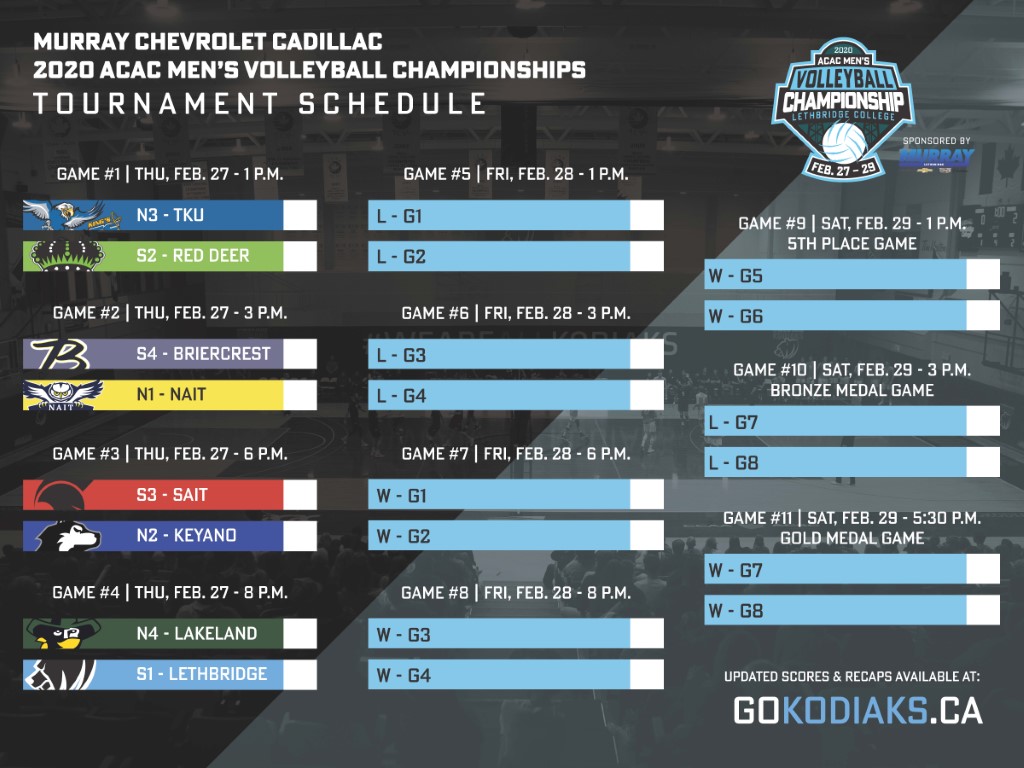