When the search started for a new president and CEO of Lethbridge College, the hiring committee members knew exactly what they wanted.

They were looking for a progressive leader with experience in post-secondary institutions, someone who was a visionary systems thinker and had exceptional interpersonal and communication skills. The job description plainly stated the ideal candidate would be approachable and open, collaborative and credible, high energy and resilient, creative and curious.

They got all of that and more in Dr. Brad Donaldson, who started work in September as the college’s ninth president and CEO.

Donaldson has the credentials – a doctorate and 17 years of working in post-secondary education, most recently as vice president academic at SAIT, as well as a previous career in industry. The systems thinking got started in his earlier career in chemical engineering and manufacturing, which is all about “understanding how a system works and how things have to come together in the right recipe at the right temperature and right pressure,” he explains.

And those qualities listed in the job description? In his first months on campus, employees and students have already seen them in action.

“In the midst of the usual hectic Convocation prep, he already knew my name and took the time to ask how I was doing with everything,” says Leslie Kramer (Office Assistant 2003), senior administrative assistant to the Registrar and one of the main organizers of Convocation.

“Brad always has a welcoming smile and is engaging and open with everyone,” adds JoJo Kariuki, the Lethbridge College Students’ Association’s Vice President Student Life. “He always takes time to check in on me as a student and a student leader, and he also always enquires on how the student body is faring, which is such a down-to-earth quality I admire in him.”

For his part, Dr. Donaldson is truly thrilled to be at Lethbridge College.

“I really felt an absolute connection with Lethbridge College, just in terms of what the college’s values, accomplishments, dreams and desires were, and being able to be a part of that is just a dream come true for me,” he says. 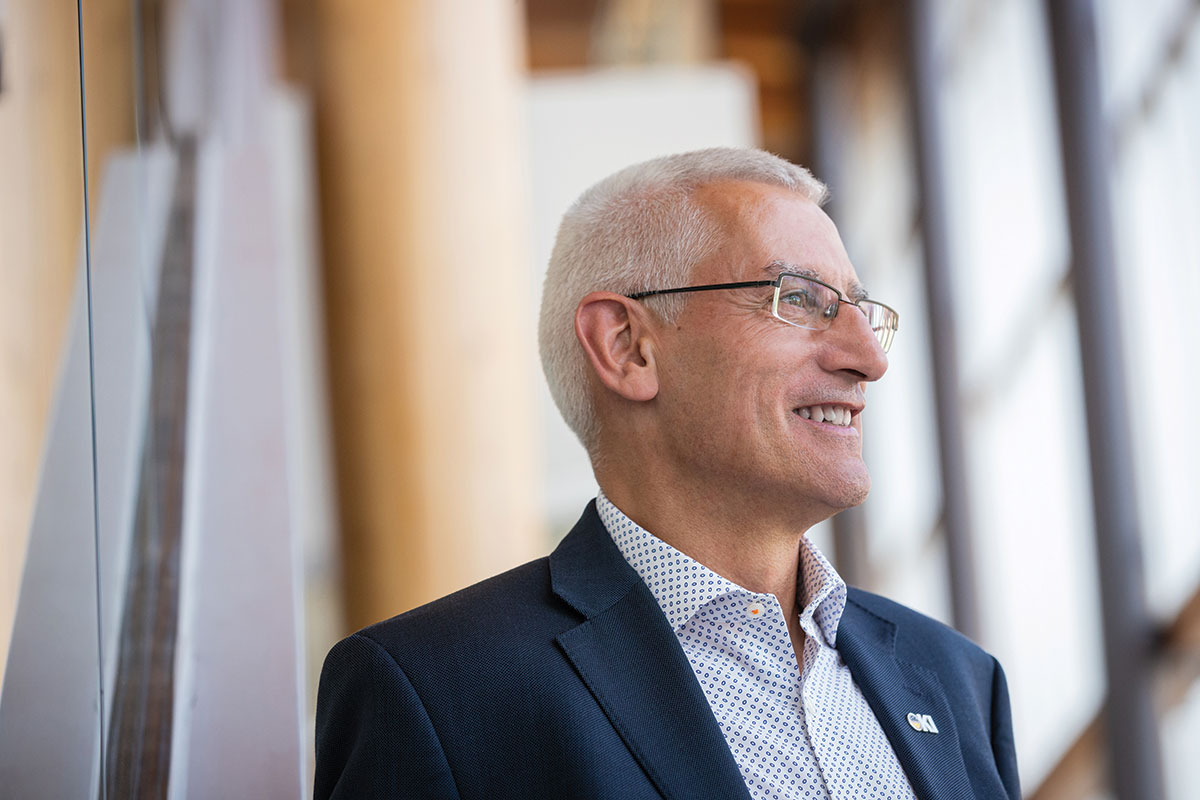 At Dr. Brad Donaldson's installation ceremony, he said: "We all have different journeys, but underlying it all is a heart and mind, of equal value. Both must be nourished, encouraged and supported."

“I FUNDAMENTALLY BELIEVE THAT AN EDUCATED SOCIETY WILL BE SUCCESSFUL, SAFE, BENEVOLENT, PROGRESSIVE AND INNOVATIVE. I BELIEVE WE CAN LIFT ALL PEOPLE UP THROUGH EDUCATION.” 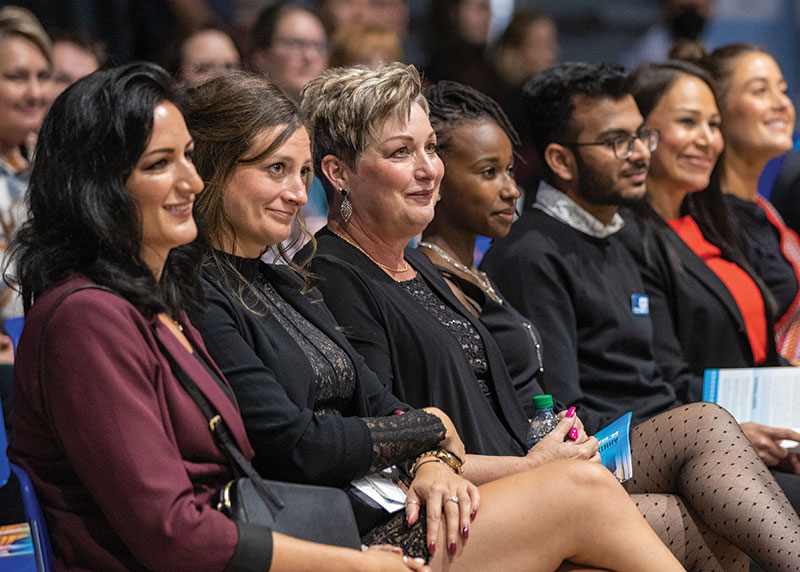 “I HAVE NO HESITATION IN STATING BRAD WILL FOLLOW THE LETHBRIDGE COLLEGE TRADITION OF STRONG PRESIDENTIAL LEADERSHIP, AND I LOOK FORWARD TO WATCHING HOW THE COLLEGE THRIVES UNDER HIS LEADERSHIP.” 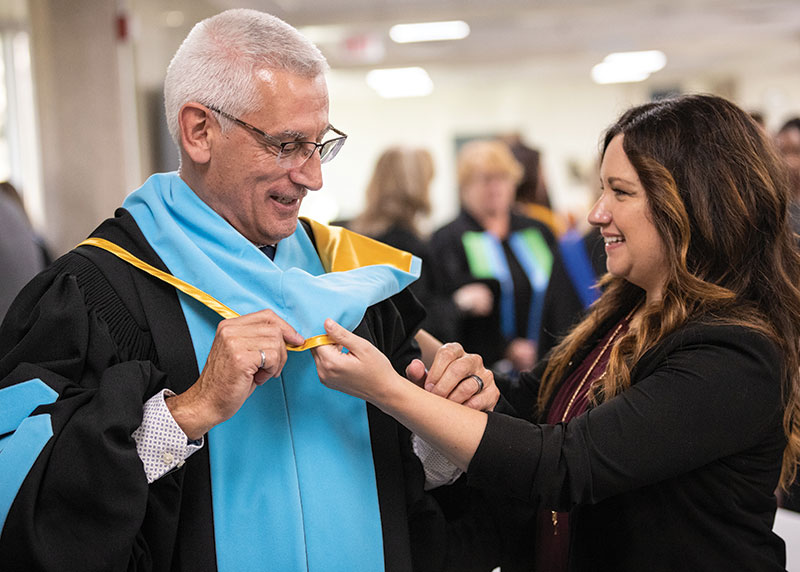 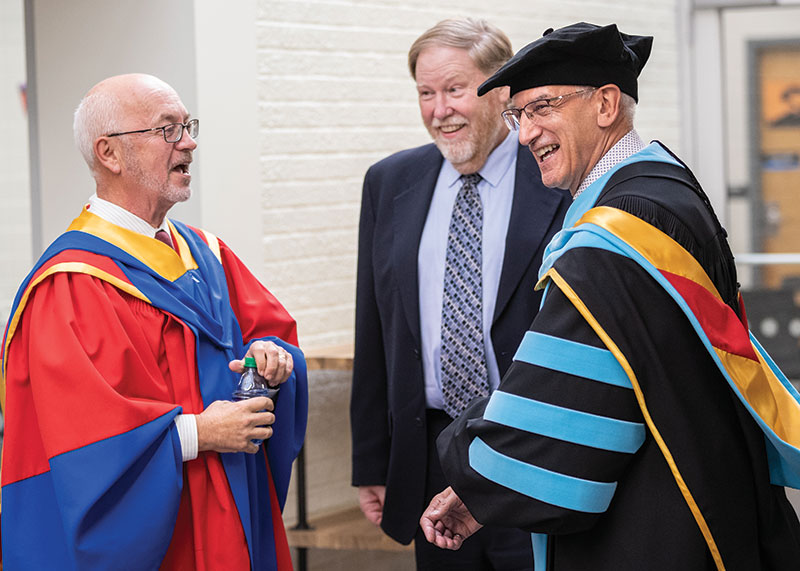 Donaldson describes his own educational journey as mixed – something he shared at the October ceremony where, with his wife, Gail, and his adult daughters, Kylene and Krista, in the front row, he was formally installed as president and CEO. In the middle of his installation speech, he told the story of a boy and a girl.

“The boy found school to be occasionally enriching but routine and a means to an end – to graduate and move on,” he said at Installation. “He applied himself to subjects he liked and sufficiently well enough in areas he didn’t to progress. The same for university, completing bachelor and master’s degrees, he navigated through his studies in a very transactional way, generally more interested in receiving the credential than the learning.

“He had a focused mind, but a flickering heart,” Donaldson continued. “He also achieved a doctorate degree, but during that journey things were changing. The journey had become as important as the completion, actually more so. The heart was awakened where the learning was brought to life to reshape the boy.”

He then told the story of a girl (Krista, his younger daughter), who found learning a challenge and success elusive. But she persevered through more difficulties, until “her ever-blazing heart came to ignite her mind.” Today she is a successful young person forging her way ahead “with personality and purpose.”

Donaldson concluded by noting: “We all have different journeys, but underlying it all is heart and mind, of equal value. Both must be nourished, encouraged and supported.”

Another thread that has been consistent throughout Donaldson’s professional life has been a focus on systems.

Studying chemical engineering served as a good outlet to feed that curiosity; going to work in the manufacturing industry allowed him to continue to study systems and investigate factors and interactions that could contribute to possible outcomes.

“People systems are far more complex than chemical or mechanical systems,” he says. “You know, when you have 10 people, you have 15 opinions! But I had a passionate desire to understand how the nature of people’s systems interact.”

Moving to post-secondary education – starting as dean of the School of Manufacturing and Automation at SAIT and going on to serve as vice president academic at Red Deer Polytechnic before moving back to SAIT in the same role – also nourished what Donaldson calls his great desire to learn.

“I realize that my learning has enabled me to have a successful life,” he says. “But we have to ask – what about people who don’t have access to learning? What about those who don’t have the opportunity? How do we use education as a means to improve people’s lives? How do we help them to ignite their minds and their hearts to really inspire themselves?

“I fundamentally believe that an educated society will be successful, safe, benevolent, progressive and innovative. I believe we can lift all people up through education.”

In a speech introducing the new president at his installation ceremony, Dr. Gord Nixon, retired vice president academic at SAIT, recalled interviewing and hiring Donaldson more than 17 years ago.

“To some it was a controversial hire because he had no previous academic experience,” said Nixon. “However, the three qualities that stood out to me from that interview were Brad’s strong leadership skills, his passion for learning and his outstanding communication skills.”

Nixon cited recent research on academic leadership in the changing higher education environment which identified characteristics of successful college presidents, including being learner-centred, a team builder, possessing entrepreneurial spirit and having relevant experience.

“Brad checks each of those boxes,” he said. “I have no hesitation in stating Brad will follow the Lethbridge College tradition of strong presidential leadership, and I look forward to watching how the college thrives under his leadership.”

“I was academic chair when he arrived as dean, and he came from industry but had no post-secondary experience,” Rhodes says. “We had a program called Teaching Excellence Foundation for new faculty, and the first thing he did was enrol in that course. He then asked permission to teach a course for two semesters. I remember talking to him at the time, and he said ‘I don’t know what I don’t know. How do I learn the operations and foundations of our school without teaching here?’ That really impressed me and our team – and set a foundation for who he is.”

Over the years they worked together, Rhodes said he appreciated how Donaldson truly thrives on connecting with people. “Communication is No. 1 with Brad,” Rhodes says. “He never judges someone on their title or position. Students, employees and the custodial staff are just as important as a vice president and deserve the same amount of respect in Brad’s book.”

Rhodes also confirmed what many Lethbridge College students and employees have already observed – that Donaldson is exceptionally good at remembering their names.

“We were at the second town hall with probably 130 or 140 people in the room,” he says. “Brad came in and – I don’t know how – but he went around to everyone and acknowledged them by first and last name.”

Rhodes offered a few other clues he picked up after years of working with Donaldson. “He’s inclusive,” he says. “Family comes first. He kind of loves one liners and bad puns. And his motto is ‘work hard, play hard and enjoy what you are doing.’” 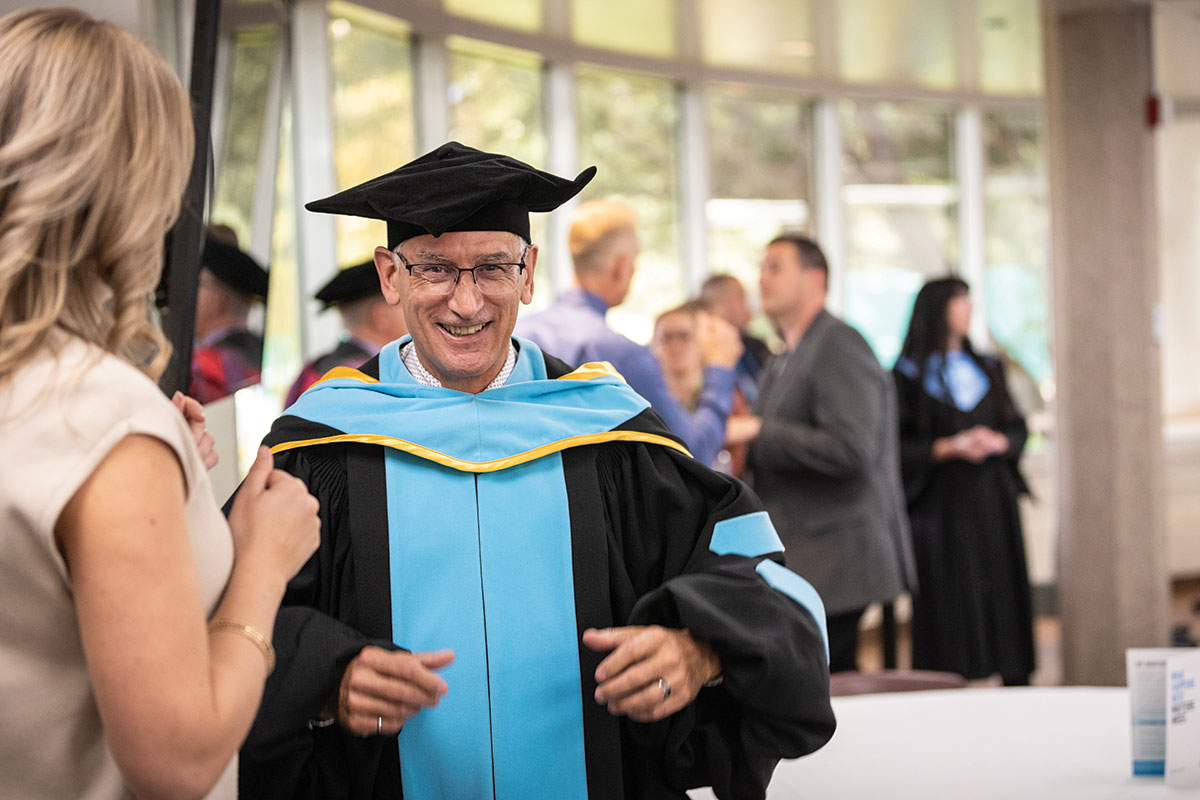 Dr. Brad Donaldson says he felt the welcoming nature of Lethbridge from the start, and that he has truly enjoyed getting to know the community of students, employees, alumni and friends of the college.

Donaldson says he has felt connected to Lethbridge and the college “from the get-go.” He’s always had a good feeling about the city – early in his career, he interviewed for a job as plant manager at Pratt & Whitney, and his daughter Krista earned a Bachelor of Science degree at the University of Lethbridge. And he got a true insider’s view of campus life by living in residence his first month while he and Gail waited for the closing on their new Lethbridge house.

“I felt the welcoming nature of Lethbridge right from the start,” he says. “And every day I meet people who are so committed and passionate about their work.”

He’s made a powerful early impression, says Stephanie Savage (Digital Communications and Media 2019), Alumni Engagement manager. “Brad’s humility and willingness to lend a hand shone through from the moment he stepped on campus,” Savage says. “He took office just days before Coulee Fest, our largest community event of the year, and I can’t even begin to imagine how stressful it would be to have that be your introduction to this community.”

Savage says that not only did he jump into networking with event attendees and volunteers, “making a conscious effort to remember each person’s name,” but he also stayed hours after the event officially ended, “collapsing tents, emptying garbage cans and doing whatever needed to be done. Seeing him do the work that he didn’t need to do was inspiring, and I walked away from that event with such gratitude for Brad’s tenacity and leadership.

“Working under Brad’s leadership has been a gamechanger,” she adds, “and I am confident that he is the right person to write Lethbridge College’s exciting next chapter.”

“I FELT THE WELCOMING NATURE OF LETHBRIDGE RIGHT FROM THE START,” HE SAYS. “AND EVERY DAY I MEET PEOPLE WHO ARE SO COMMITTED AND PASSIONATE ABOUT THEIR WORK.”