Lethbridge College staff members go above and beyond in their work and in their communities. Here are a few colleagues who have been recently honoured:

Sheldon Anderson, the college’s Dean of the Centre for Trades, was recognized with the Chairperson’s Award of Excellence at the Alberta Apprenticeship and Industry Awards of Excellence in September in Edmonton. The award honours individuals who have demonstrated extraordinary dedication and commitment to their trade and to apprenticeship and industry training in Alberta.

John McGill, the college’s Security team lead, published an article in October titled “Return from injury or concussion: How to keep your kids healthy.” In addition to his work at the college, McGill is also an on-ice injury recovery consultant who works with athletes after injury (such as concussions) to shorten their recovery time and maximize the effects of their rehabilitation.

Dr. Kevin Smith joined Lethbridge College as the new Dean of the Centre for Applied Arts and Sciences this past summer. Born in Edinburgh, Scotland, Dr. Smith earned a PhD from MRC Clinical Research Centre in Harrow, England. Since coming to Canada, he has worked as Dean of Graduate Programs at the University of Northern British Columbia and as a faculty member in Health Sciences at UNBC.

Dawn Sugimoto, internal communications specialist, was named one of four SimpsonScarborough Scholars by the Council for Advancement and Support of Education (CASE) in July. The program supports the professional development of promising communications and marketing practitioners in the educational advancement profession who are new to the field of post-secondary advancement. 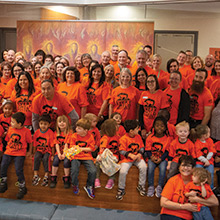 Students and staff joined in the college’s Orange Shirt Day celebration in September with activities that included a week-long display about residential schools that was open to the public. “Orange Shirt Day is about building relationships and understanding,” says Shanda Webber, Lethbridge College’s manager of

Indigenous Services. “It’s about educating our students, staff and our community members, about residential schools, and about moving forward together.” 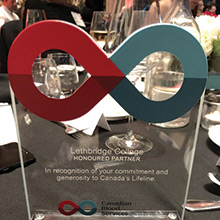 Lethbridge College earned the Regional Partner Award for the Prairie Region of Canadian Blood Services at the annual Honouring Canada’s Lifeline event in Ottawa in September. The college has supported Canadian Blood Services for over a decade, and has rallied its community to donate nearly 3,000 units of blood in that time. The college uses its platforms to promote Canadian Blood Services, including advertising on the digital sign on Scenic Drive; promoting blood donation on social media, including participation in the Missing Type campaign; and writing about blood donation in both Wider Horizons magazine and Connections internal newsletter.

Dave Maze, chair of the college’s School of Justice Studies, and George Gallant, instructor in the Digital Communications and Media program, are collaborating on a new internal research project to test whether virtual reality (VR) can better prepare justice and corrections students for face-to-face interactions. The pair are using 360-degree video to create two different training scenarios using live actors. Once these are completed, students will use virtual reality to enter the scenarios and interact with the people in the scene.