Sourdough bread. Yogurt. Kombucha. Cheese. If you’ve had any of these products (or watched Dr. Oz), you’re already familiar with the idea that naturally occurring bacteria can offer benefits, whether to taste or to health.

As one Alberta biotechnology company is showing, there are more benefits to bacteria than a healthy gut. Raymond-based AdvancedAg Inc. puts microorganisms to work to clean lakes and waterways and enhance health and productivity of soil and plants. In the process, they’re putting a family business at the forefront of a growing subsector of biological agricultural products.

IT STARTED WITH THE GERM OF AN IDEA.

Dr. Phyllis Day Chief was a long-time writing instructor at Lethbridge College, with a background in education and a thriving side business as a technical writer.

“I had all kinds of contracts with outside companies, including with one called Natural Golf Solutions, which hired me to do a brochure,” recalls Day Chief. “I did some research and found out that they had this environmentally friendly product that could clean up bodies of water, which I saw as a huge opportunity.” With no one else selling the product in Canada, Day Chief decided to explore starting her own bacteria business. However, before taking the plunge, she had to answer the question: does this stuff actually work? For answers, she looked in her own backyard to Lethbridge College’s Aquaculture Centre of Excellence (ACE) and researcher John Derksen.

“What Phyllis was offering was bacteria that was active and ready to go, and the concentrations she could achieve were huge,” says Derksen. “I told her it was better than any other products I saw out there at the time and it's an environmental friendly way to go since these [bacteria] are naturally occurring anyway.”

With the science side covered, Day Chief also consulted with Cal Koskowich, Industrial Technology Advisor with the National Research Council Canada who has long had an office at Lethbridge College, for help navigating the complexities of small business start-ups. They worked through everything from government approvals to regulations and research grants to get her company – dubbed Advanced Water Technologies – off the ground.

“In the early days, it’s figuring out things like: how do I start a company? How do I perform our finances? How do I forecast budgets?” says Koskowich. “That's where a lot of companies might chicken out, and it’s a credit to Phyllis that she dove right in without hesitation.”

Almost 20 years later, Advanced Water Technologies is a division of AdvancedAg Inc. and is an industry leader in natural water treatment solutions. Its clients range from municipalities to golf courses to the Calgary Zoo. They even worked with the City of Lethbridge on a three-year project to clean up foul-smelling sludge in Henderson Lake.

“Our dynamic now as business owners is quite incredible, and it evolved so that we all bring something a little bit different to the table,” says Joshua Day Chief. “Mom and I tend to be the dreamers of the business and Ashley will keep us grounded with her analytical thinking.”

“Growing up around the company it was easy to see mom’s passion for the environment and how we could offer benefits to water and now agriculture,” says Ashley Wevers. “I’d always had a hand in the company doing the books and invoicing, so when the company grew to the point that I had the chance to come on full time, it was a no-brainer.”

Having established a foothold in the water treatment business, the company began casting around for new markets. With more and more farmers showing interest in sustainable solutions and products, finding a way to bring bacteria treatment to the prairies’ massive agriculture sector seemed like a logical next step, which is where Joshua Day Chief’s Lethbridge College experience factored in. 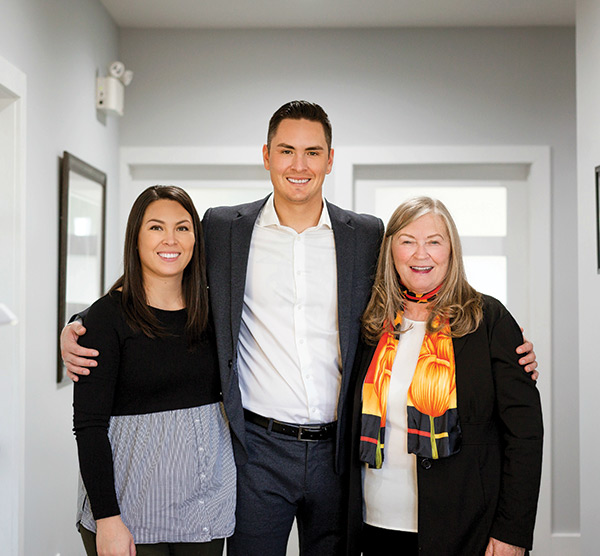 “One of our weakest points as a business early on was the technical and science background,” says Joshua Day Chief of his decision to study at Lethbridge College. “So I went into the [Environmental Assessment and Restoration] program really focused on the water side of things, but little did I know how much plant and soil science would come into play.”

But they did. In 2016, the company put out a call on Facebook looking for farmers interested in trying their new agricultural product, a bacterial brew called ACF-SR. The product contains a mixture of five different bacteria, each with a different function, that work to naturally promote plant growth by taking nutrients in the soil that are otherwise unavailable to plants and turning them into compounds they can use. The overall effect is to increase crop yield and soil health, while allowing farmers to cut back on other inputs that could otherwise be harmful to the soil ecosystem like man-made fertilizers or pesticides.

“We got calls from farmers right away,” recalls Joshua Day Chief. “We did our first 50 acres on a crop of peas and saw significant yield and quality increase. That farmer got really excited and told us ‘this is the future of agriculture.’ ” After that initial success, they landed a client with 8,500 acres in northern Saskatchewan that put their product to a new test.

“That was the first time anyone used our product on such a large scale, and to hear the farmer talk about how important this product was for his soil health and for reducing other inputs was a real eye-opener for us,” says Joshua Day Chief. “We realized that the agricultural market was looking for something like this for a long time and all the research we had done on bacteria and the brewing process is what made it realistic for large scale applications.”

Since those first forays into agriculture, the company (now divided into water and agriculture divisions under the banner AdvancedAg) has continued to make headway, with their bacteria mix applied to 16,000 acres in 2018 and up to 130,000 acres in 2019. Joshua Day Chief says there’s more room to grow. AdvancedAg’s bacteria is expected to be deployed on between 400,000 and 600,000 acres in 2020.

Keeping up with the growing demand has meant AdvancedAg has boosted production of its signature bacteria blend beyond its main facility in Raymond to a network of facilities on the farms of clients in Alberta and Saskatchewan. Day Chief says the capacity grew from three facilities producing 30,000 gallons in 2018 to 12 facilities with a capacity of 300,000 gallons in 2019. More brewing facilities are expected to open in 2020, including sites in British Columbia and Ontario, to bring total production to more than 1 million gallons.

Joshua Day Chief says AdvancedAg’s recent and rapid growth is also part of a shift in the agricultural sector towards more environmentally friendly products. According to the Biological Products Industry Alliance, an industry group, the global market for biological products reached $3 billion in 2018, an almost 12- fold increase from just three years prior.

“When we started this, we could hardly get an audience to talk about bacteria and what they can do for the environment and soil ecosystems,” he says. “So it's kind of neat to see how the market in the world has changed to accept this type of science.”

"We always say that we put the family first."

AdvancedAg’s work in the field has not gone unnoticed or unrewarded. It was named a Canadian Innovation Leader by the National Research Council of Canada in 2010 and the company has been able to leverage funding for research projects and upgrades, including a $10,000 micro-voucher from Alberta Innovates to produce software to monitor their bacteria brewing process. In 2019, they also received $100,000 through Western Economic Diversification Canada’s Women Entrepreneurship Fund.

This series of successes has enabled the Day Chiefs to bring on five full-time employees and employ a network of consultants. And it’s allowed Phyllis Day Chief, who retired from Lethbridge College in 2016, to take a step back from the day-to-day operations of the company.

“She built the foundation for us and kept this thing going when maybe she should have walked away,” says Joshua Day Chief. “But now she's able to do things like go down to Arizona for six months of the year and enjoy herself.” For all its growth and recent success, AdvancedAg remains a family affair.

“We always say that we put the family first,” said Ashley Wevers. “Work is important, but no matter how big the company gets our family is what we hold near and dear.” Adds Phyllis Day Chief: “I think the catalyst for all of this growth is the fact that the three of us work together and bring in other people and make them feel like they're part of our family. I believe this is what makes it work; we have a group of people now who are as committed as we are.” 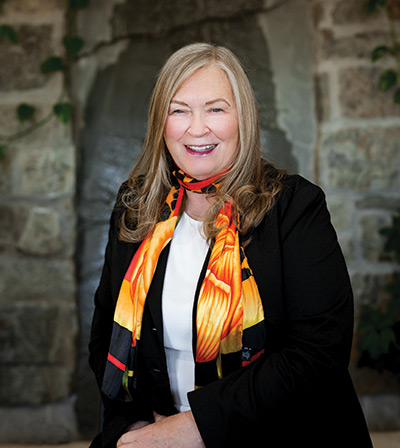 For Phyllis Day Chief, her passion for teaching started early.

“I wanted to be a teacher from the time I was three years old,” recalls the former Lethbridge College instructor. “My mother would talk about how I would lecture to my dolls.”

When she grew up, she made her dream a reality. She joined Lethbridge College as a full-time instructor in 1985. She stayed at the college for 31 years, helping found the General Studies program and teaching technical writing to School of Justice Studies students, all while raising her children on her own, receiving her doctorate and starting her own biotechnology business, AdvancedAg Inc.

Day Chief’s passions were passed on to her children: her eldest daughter, Kirsten Fantazir, is now an instructor in the Criminal Justice program. Two other children, Joshua Day Chief and Ashley Wevers, are Lethbridge College grads and have leadership positions with AdvancedAg.

“I used to come [to the college] as a kid and hang out in the classrooms and draw on the chalkboards,” recalls Fantazir. “And now I teach in the same building, working with new instructors from the field to help them translate their knowledge and experience to students and she was a big inspiration for that.”

“I loved working with my students and being part of their learning,” says Day Chief. “It was never a job for me. Seeing my children follow in my footsteps feels fantastic. Being able to set the path for them is my reward.”