If the Lethbridge College campus felt busier than usual this past September, that’s because it was. The college’s student population surged for the 2018 fall semester with more than 5,100 students enrolled in college programming, a six per cent increase from fall 2017. As of Sept. 19, a total of 5,154 students are enrolled in certificate, diploma, degree, apprenticeship and upgrading programs. The increase is led by a dramatic rise in the number of international students attending the college. A total of 471 international students are taking degree, diploma or certificate programs this fall, compared to 231 last year. The largest increase is students from India, jumping from just 14 in 2017 to 176 this year. Kenyan students also saw a large jump, from 36 to 95. The college also has more than 1,100 students registered in non-credit continuing and corporate education programs.

Lethbridge College added 19 additional seats in its Computer Information Technology (CIT) program this fall as part of a Government of Alberta initiative to grow technology programming across the province. The college’s CIT program traditionally fills to capacity, with lengthy waitlists for admission. These seats will help to service that demand, while adding to the college’s reputation as a leader in the technology field in a wide variety of program areas. The additional seats are part of the government’s five-year, $50-million investment in growing Alberta’s tech sector. By 2023, at least 3,000 new tech-related seats will be added to post-secondary institutions across the province. The recently established Talent Advisory Council on Technology will work with the tech industry, students, labour and post-secondary institutions to advise government on the best training opportunities to prepare Albertans for a more diversified and tech-savvy economy.

Lethbridge College received its first institutional grant funding from the federal government’s Social Sciences and Humanities Research Council (SSHRC), a relative rarity for colleges. Over the past three years, only 10 Colleges and Institutes Canada members have received SSHRC institutional grant funding. Lethbridge College’s SSHRC grant will provide $45,000 over three years to support small-scale research and related activities. Faculty will be invited to submit applications that will be evaluated through a peer review process. These small grants – five, $3,000 awards per year – will create more opportunities for students by providing for pilot projects or work that will be foundational to larger research efforts. 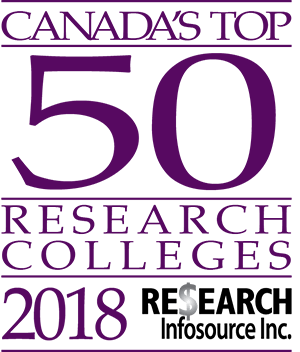 College ranked as one of Canada’s top 50 research colleges

Lethbridge College has once again been recognized as one of Canada’s top 50 research colleges. The college placed 50th in the 2018 rankings, released in November by Research Infosource. It is the second-straight year – and the fifth time in the last six years – that Lethbridge College has been included in the rankings. With a focus on applied research that meets needs identified by industry, the college’s Centre for Applied Research and Innovation is a catalyst for economic growth, sustainability and social development in southern Alberta. Lethbridge College has an annual research budget of $1.6 million and has provided valuable support this year to 64 industry partners.

Lethbridge College now has a dedicated space for members of the LGBTQ+ community and allies to meet and socialize. The Pride Lounge was officially opened by members of the college community, the Lethbridge College Students’ Association’s (LCSA) LGBTQ+ club and Alberta’s Minister of Advanced Education Marlin Schmidt in September. The Pride Lounge is located on the main floor of the Andrews Building in the heart of the campus. The creation of a dedicated space was the top priority of the student association’s LGBTQ+ club, which was re-formed in 2016 after a brief hiatus. The college’s Executive Leadership Team unanimously approved the creation of the lounge earlier in 2018. “We have countless examples of LGBTQ+ individuals who feel isolated, don’t know where to go for support and don’t feel like they belong anywhere,” says Zachary Wigand, vice president of the LCSA LGBTQ+ club. “This lounge will give them that space, and it comes with a message that we are inclusive and we are really going to try to help anyone who needs support.” The college has made on-going efforts to show its inclusivity for the LGBTQ+ community, including raising the Pride flag in conjunction with the city’s Pride week each of the past three years, officially marching in the Pride parade for the first time earlier this year and creating gender non-specific washrooms on campus. The LCSA LGBTQ+ club also hosted an on-campus Pride day on Sept. 19.

AgENT program off to successful start

Lethbridge College’s Agriculture Entrepreneur in Residence (AgENT) program launched successfully in September by pairing more than 40 students with local industry partners to solve real-world problems that affect the agriculture industry. All Lethbridge College students are eligible to join the extracurricular AgENT program. Forty per cent of AgENT participants are registered in one of our agriculture diplomas. AgENT also has students from the Business, Engineering Technology, Computer Information Technology and Environmental Sciences programs. It is a very engaged and energetic group that benefits from cross-disciplinary collaboration. At the beginning of the academic year, students were presented with challenges and then received industry mentorship throughout the fall as they brainstormed, designed and tested solutions. Students also took part in a speaker series, workshops, field trips and more and these activities will continue throughout the winter. In April, they will pitch their solutions to industry with the chance to win awards and see their ideas put into action. The students’ mission will provide them with practical experience while expanding their network by connecting them with key industry partners. The experience they gain by working through an issue that currently faces the agriculture industry will help set them apart from other job seekers once they graduate and begin their chosen careers. The AgENT program is made possible thanks to a $5-million gift in 2014 to Lethbridge College and the University of Lethbridge from Cor Van Raay, a leading Canadian cattle producer. The program meets his mandate to spur innovation in the local agriculture industry.

Rising to the top

The entire campus is benefitting from the launch of the second year of the Baker Apprenticeship program this fall. The apprentices are learning to blend their passion for baked goods into a sweet career – while students, staff and visitors to campus get to experience their learning successes throughout the semester in the Food Court and Culinary Market.

Three Lethbridge College School of Business students teamed up with two University of Lethbridge students to win third place in the Cor Van Raay Agribusiness Case Competition Oct. 26 and 27. Alois Kerckhof (Business Administration – Marketing) and Mark Grisnich and Bryan Ross (Business Administration – Accounting) were teamed with U of L students Taylor Jacque and Katie Dudek and shared the $250 prize. A team of Lakeland College students took the first place prize of $1,000, while a University of Saskatchewan team won $500 for second place. This year’s challenge was based on a dairy company, and students had four hours to analyze and recommend ways to improve the company’s structure, product line and marketing. Teams then delivered 15-minute presentations to a panel of judges. Fifty students participated, including 11 from Lethbridge College. Students had an opportunity to network with industry leaders and attend a keynote address by Lethbridge College alumna Dianne Finstad (Radio Arts 1981). Finstad, a Lethbridge College distinguished alumni award winner, has more than 30 years of experience in television, radio and print media. 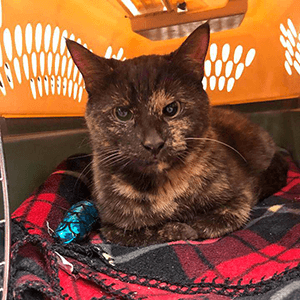 The college welcomed six furry new friends to campus in October for the first Cat Café, a feline version of Doggy De-Stress. Kittens Holt, Jake Peralta and Scully from the Brooklyn Nine-Nine litter and adult cats Moby and Angel provided cuddly de-stress to students and staff.

Nearly 700 runners came together in September to run in the annual Lethbridge Police Service (LPS) Run in support of the Special Olympics – including at least 10 from Lethbridge College. LPS is an important partner to the college, and staff from the Criminal Justice and Corrections programs are involved in administering the competency-based training for LPS cadets. In addition, many of our grads go on to work for and with LPS. From Lethbridge College, Cate Rigaux and Barb Mantello finished in the top three in their age categories for the 10-km race and Ibrahim Touray finished with a personal best in the 5-km race. Other LC team members and family members who also ran include Aaron Eyjolfson, Sheila French, Dean Kolebaba, Jim Laing, Roberta Smallbones, Jeanine Webber and Wendy Weninger.

Lethbridge College staff members focused on the scholarship of teaching and learning (SoTL) have been leading the way in their industry. Andy Benoit and Melanie Hamilton, Scholarship of Teaching and Learning research leads, travelled to Bergen, Norway, in October to present their research, "Waving a Magic Wand: An Innovative Journey for Early Career Researchers and SoTL Engagement," at an international conference. In addition, the two presented their work at the Mount Royal SoTL symposium in Banff in November. At the same conference, Hamilton also teamed with Nursing instructor Robyn Brownlee and with Allied Health chair Karla Wolsky to present their research on teaching and learning in the Nursing classroom.