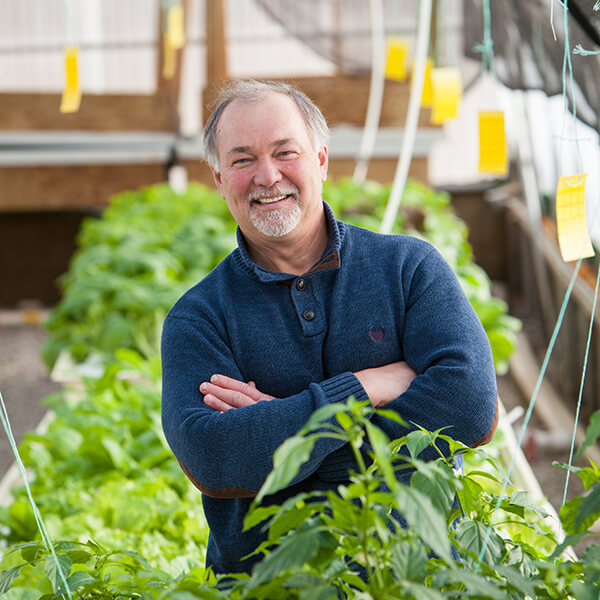 From Moscow to Alberta, basic scientist to applied researcher, aquaponics skeptic to champion, Nick Savidov has proven adept at navigating changing circumstances to end up right where he wants to be.

"I think about myself as an extremely lucky person," says the garrulous senior aquaponics research scientist with Lethbridge College's Aquaculture Centre of Excellence (ACE). "I'm doing what I like most in my life and if I can help people solve their problems, that is one of the most satisfying activities I can imagine."

Savidov's path to Lethbridge began in Russia, where he was born and raised. He attended the Russian State Agrarian University (RSAU-MTTA) in Moscow, one of the oldest universities in the country and one of the few in Europe focusing on agricultural science.

After graduating with M.Sc. and PhD degrees in Plant Physiology and Biochemistry, he was invited to continue his studies at Ben Gurion University in Israel. After finishing his degrees there, Savidov was asked to stay on as an instructor, a move made easier by the changing political tides in his homeland.

"Basically, at that time the Soviet Union was disintegrating and for me it would have been a waste of my life to stay there, so I decided it would be a good idea to emigrate."

In Israel, Savidov studied plant adaptation to stressors, including drought, salinity or high temperatures, conditions common in the environment of the Negev Desert. Savidov describes this period in his life as a fruitful one for him professionally. After moving to Canada in 1997, he spent five years at the University of Alberta before applying for the role of head greenhouse crops research scientist with Alberta Agriculture's Crop Diversification Centre South in Brooks. "I applied for the position without much hope because I had only been in Canada for five years and there were many candidates from across Canada, so it was a great surprise [to be selected]."

It was a role that required Savidov to shift his approach to science from a purely academic one to one centred around finding real-world solutions.

"For me, it was a pretty drastic change because, up to then, I had been engaged in fundamental, basic research, he explains. "In Brooks, the main focus of the program was the development of technologies and transferring those to industry."

In more than a decade with Alberta Agriculture, first in Brooks and later as a senior research scientist at Edmonton's Crop Diversification Centre North, Savidov pioneered new tools and techniques for commercial use, including introducing a charcoal variant called biochar as a soilless medium for greenhouses and experimenting with liquid chicken manure as a nutrient source for crops. He also began exploring the growing field of aquaponics, an agricultural method in which fish and plants are cultivated together in an integrated system that can efficiently and safely produce plants year-round.

"I'd be lying if I said I accepted aquaponics right away," Savidov says. "I was interested in hydroponics. In hydroponics, you control every input very tightly. In aquaponics, it's the fish that control everything and I didn't understand how you could really manage plant growth if you don't know what you put in the water."

However, after his experiences with the college's Aquaculture Centre of Excellence, Savidov overcame his initial skepticism and embraced aquaponics. "With aquaponics, what essentially happens is you are utilizing the same mechanisms that govern ecosystems for millions of years, so you know that it works," says Savidov. "And while that all sounds nice the question is: can it be economically viable to build a business?"

In conjunction with ACE, Savidov designed and tested four different generations of systems prototypes for commercial aquaponics. He ultimately developed a fully automated zero-waste aquaponics system that utilized both liquid and solid waste – the first in the world.

The first Canadian commercial aquaponics prototype was tested between 2011 and 2013 by Red Hat Co-operative, one of the largest greenhouse companies in Canada.

Championed by Lorne MacGregor, the college’s director of Applied Research at that time, aquaponics research at ACE grew significantly between 2009 and 2014. In 2012, ACE received its first Natural Sciences and Engineering Research Council of Canada (NSERC) grant for aquaponics, followed by a five-year, $2.1 million grant in 2015 to make Integrated Fish and Plant Systems (IFPS) a commercially-viable food production solution. In 2015, Savidov officially joined ACE as the Senior Research Scientist – Aquaponics Program.

“[Nick] is an amazing researcher with an unbelievable level of passion and energy,” says Jagvir Singh, director of the college’s Centre for Applied Research and Innovation. “He is not only spearheading the NSERC project, but his close  national and international connections with the aquaponics industry have been instrumental in establishing some great collaborations with the college.”

Under Savidov, ACE has expanded its connections with industry, including greenhouse growers and aquaculture operations like Current Prairie Fisherman, a massive fish-farm in Nobleford that has constructed one of the largest aquaponics facilities in the country.

Recently, the college was awarded a new $50,000 grant through a joint Campus Alberta Small Business Engagement/NSERC funding program to work with Aqua Terra Farms in Okotoks to develop a biochar filtration system to remove impurities in the water called total suspended solids (TSS).

Aqua Terra Farms owner Dan Ronald says biochar, unlike other filtration methods like activated charcoal, can capture the solid particles even at the microscopic level.

“We have a very simple filtration system in our operation and it’s not removing enough of the solids,” says Ronald. “We’re trying to remove those particles so they don’t accumulate in the system and cause us problems. We want crystal clear water with just the nutrients flowing through.”

Ronald says working with Savidov and ACE enables Aqua Terra to develop a biochar filtration system, have the results empirically tested and make connections with other industry partners so the system can be commercially scaled and sold. Savidov adds that the success of such a system would have far-reaching implications for industry.

“If we are successful, the industry gets a good tool to control total suspended solids in the fish effluent they recycle. It means that any fish species could be introduced successfully into aquaponics or aquaculture, making large scale commercial fish farming of species possible when it would have previously been unsustainable to do so.”

“With aquaponics, what essentially happens is you are utilizing the same mechanisms that govern ecosystems for millions of years, so you know that it works.”

Another area where Savidov and ACE are breaking new ground is in aerobic biodigestion technology, a process in which organic waste is broken down by bacteria into carbon dioxide and minerals available for plants. When integrated with an aquaponics growing operation, it would mean the entire system – fish, plants and bacteria – would generate no waste.

Savidov says such technology could have applications for places where conventional agricultural techniques are impractical or impossible, from remote Indigenous communities to the surface of Mars.

“We’re setting the stage not just for more sustainable agriculture here, but also for space colonization,” says Savidov. “It may sound crazy now, but if you recycle waste, water nutrients, even carbon dioxide, you can use plants and produce food anywhere.”

Savidov’s obvious enthusiasm and vision for the potential of the method has earned him a reputation as a sort of aquaponics guru with a vision of making Lethbridge College a national hub for aquaponics training and education.

“It has been a great experience for me to work with [Savidov],” says Penny Takahashi (Renewable Resource Management 2003), the centre’s aquaponics technician. “I have gleaned a tremendous amount of knowledge and insight from him and he is a rich resource for all of us. It’s been so rewarding to work with him and to be a part of the tremendous progression forward. His work stretches all of us in our areas of expertise.”

Dan Ronald credits Savidov for helping him get Aqua Terra Farms up and running in the first place back in 2009. “I look up to what he’s done in the industry and sought him out to work with because of his influence,” says Ronald. “A few years ago, there weren’t many people involved in [aquaponics] so finding someone who was scientifically testing these theories and who could provide us with their research was the springboard I needed. It’s great to have someone with his energy and enthusiasm for the whole field willing to work with us and share his knowledge. It’s really been an honour.”