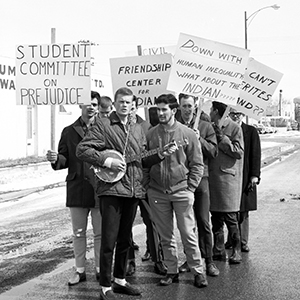 This installment of Lethbridge College Legacies looks at the first 20 years. It would be appropriate to call these the “junior” years because originally the institution was known as the Lethbridge Junior College.

Students and staff found many clever ways to have fun during these first two decades. In February 1962, a group of students searched the grounds looking for groundhogs. We don’t know if any were found. There were also the “Ugly Days” when students were encouraged to dress as ugly as they could. Frosh Queen and College Queen contests appear to have been held each year. Winter carnivals helped to make the short days of February a little more fun for students.

There were also activities for those coming back to school. The orientation week of 1969 involved a greased pig competition. The pig was provided with a 30-foot head start and then the students competed to catch him as quickly as possible. Bruce Rogers, a first year recreation leadership student from Red Deer, managed to catch the pig that year and win the prized trophy. The pig was returned to the farm following the event.

But it wasn’t all just fun and games. The college students of the time had a concern for the wider world. In 1965, Jim Neufeld, president of the college student union, played the banjo and led a march of students carrying placards to protest inequality against Hutterites and Indigenous people. In 1969, college students (along with students from many other schools) participated in the Miles for Millions Walk, a fundraiser for people in developing nations.

Sometimes the fun and the fundraising went hand-in-hand. In 1968 the college set up a kissing booth to help raise money for the Canadian Heart Foundation. Kisses were 25 cents each.

By the 1970s, the college had changed its name and grown considerably over time and Lethbridge Community College was looking ahead to a great future. But that’s a story for another time and we’ll look into the second 20 years in the spring issue of Wider Horizons.