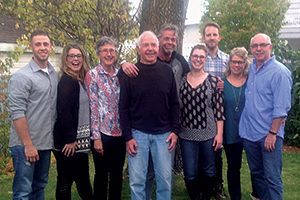 Whether they’ve been here as students or staff, it is clear that many members of the Prindle family, as well as their extended family, have a close connection with Lethbridge College. Fourteen – yes, 14 – members of this family have spent time on campus.

From the courtroom in the Andrews wing, to the business classrooms campus-wide to the student kitchens to the skilled trade labs and up to the boardroom, the Prindles have seen it all.

Lee Prindle served many roles at Lethbridge College including faculty member, Faculty Association president, Academic Studies chairman and Board of Governors member. He was the recipient of several teaching awards: LCC Student and Faculty Association Teaching Excellence Award in 1995, Honourable Mention Award for Innovation in Teaching from ACCC in 1987 and the Teaching Excellence Award from NISOD in 1994.

Lee’s wife, Lucelle Prindle, is the owner of Southern Alberta Language Assessment Services. She previously worked at Lethbridge College as a faculty member and served as president of the Faculty Association twice. She also worked as administrator for the Centre for Teaching and Learning.

Lee’s oldest son, Kim Prindle, studied Recreation Management at the college. He married Gayle Norris, who is a nursing graduate from Lethbridge College. Their three children, Jamie, Sean and Robert, are all college alumni. Jamie Prindle attended the Criminal Justice program and works as a Canada Border Patrol Security officer. Sean Prindle graduated from Business Administration and works as a property administrator at a real estate company in Lethbridge. Robert Prindle completed the Criminal Justice diploma and is in the Justice Studies Bachelor of Applied Arts program, having completed one year so far. Jamie’s husband, Stewart Kambietz, also graduated with a Criminal Justice diploma and works for Lethbridge Police Service.

Lee’s second son, Kevin Prindle, works as an agriculture supplier in Taber. He completed the Carpentry Apprenticeship at the college.

Lee’s third son, Dave Prindle, works for Honeywell as a journeyman electrician. He completed the Electronic Engineering diploma and the Electrical Apprenticeship at the college. He also worked for a few summers on grounds and painting crews at the college while he was a student.

The Lethbridge College connections don’t stop there for the Prindles and their extended family. Lucelle’s brother, Damian Herle, is a Law Enforcement graduate and her brother, Jerome Herle, completed chef training at the college. Damian’s daughter, Nicole Gauthier, graduated from the Child and Youth Care program and his son, Ian Herle, graduated with a Business Administration diploma.

This family sets an informal record for most connections to the college. Wider Horizons would love to hear from other families who might be able to challenge this record – drop us a note at WHMagazine@lethbridgecollege.ca and share your story.