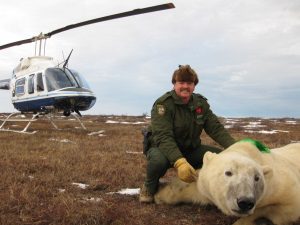 From 2009 until 2015, Bob Windsor kept the streets safe in the arctic town of Churchill—or at least tried to. Even with less than a dozen blocks to protect, the Manitoba conservation officer and his small staff were heavily outnumbered. That’s because every November hundreds of culprits stalk the town and its 800 residents.

Perps are hungry, disoriented and sometimes very aggressive—and weigh half a ton. Welcome to the polar bear capital of the world. The animals gathering in Canada’s far north are waiting for Hudson Bay to freeze. The return of the sea ice enables the Ursus maritimus population to resume hunting their favorite meal: seals. But until then, they’re landlocked and attracted to the sinful smells of civilization. And as the rapacious bears encroach, the salt-and-pepper-haired Windsor led the first line of defense of the polar bear alert program.

In November 2014, which would turn out to be Windsor’s last November in Churchill, writer Adam Popescu rode shotgun with Windsor to see what it’s like policing the arctic.

What’s a typical day in the life of a polar bear beat cop like?

Bob Windsor: Usually starts off with a patrol to see if there’s any bears in town. The chance of a bear coming into town is pretty good; hard part is seeing it in weather like this.

Tell me about your hardware. What do you carry to keep the bears away?

BW: I’ve got a scare pistol. Screamer cartridges go into the barrel, make a big screaming sound, and it’s a visible one, sparkling as it goes. We use that if a bear’s really close. Next would be my shotgun, our most commonly used tool. Cracker shells shoot about 75 yards, then explode. You don’t want to put the exploding part past the bear, because you may chase him back towards you. You want to aim a little higher so it explodes above them. With the shotgun, on my bandelier, [these] green cartridges are rubber bullets. If a bear’s close, and not responding to sound, that’s an option to get them moving. I like paintballs better than rubber bullets. Rubber bullets are $6 apiece. Their range: maybe 35 yards. After that, good luck hitting anything. Paintballs are really cheap, range-wise a little better, and you can just let them rip. On the bottom of my bandelier are red cartridges. Those are rifle slugs for me to protect myself.

Have you had to use that?

BW: I’ve had to shoot two bears. I was hoping to go my whole time without having to, but there are moments when it’s necessary.

Tell me what it’s like shooting at a bear.

BW: [In November 2013], there was an attack in town. Two people were very seriously injured. I was first on scene, and I ended up shooting the bear. Our policy is if a person is killed or mauled, we permanently remove the bear. There was another attack last September where we didn’t find the bear that night, but we caught him in a trap the next morning. That bear is at the zoo now, permanently removed, but not killed.

Have you seen bears on the road we’re on right now?

BW: Within town, there isn’t a road or an area I haven’t seen a polar bear. There’s times we’ll chase a bear from town, it ends up on this road, and we drive behind it and push it out of town. The majority of the bears we deal with, that’s what we do. If there’s one in or near town, just traveling down the coast, the town is basically in its way. And if it’s heading north, we’ll just help it continue in that direction. Our program is broken down into three zones. Zone One is the town, and that extends about a third of a mile east of town. Any bear within Zone One is removed immediately.

Tell me about the polar bear jail.

BW: The facility opened in 1981. Over 1,400 bears have been through since then. There are 28 cells; two are double-sized. We reserve those for family groups; little bigger area, less stress. Five cells have air-conditioning, so if we have to hold a bear in the warmer months that keeps them comfortable. As of today, we have 15 bears in the facility. Normally we have the 30-day rule. Zone One bears we hold on average 30 days. Exceptions would be perennial problem bears. We dart them before they get to town so they don’t have the chance to break into buildings or do the nasty things they like to do.

How many calls do you get on an average day?

BW: The most I’ve gotten is 22. One night last year between 5 p.m. and 2:30 a.m. we had 12 calls. In an average year we do about 300 occurrence reports. Once we got a call, and there were five bears we had to deal with before we went home. Then you go home and it’s a matter of minutes before the phone rings again. The town is tourism-based, so it’s great when there are bears around, as long as nobody gets hurt.

Have officers been hurt in the line of work?

BW: Not by a bear. The main priority is safety from bears; the next is the welfare of bears from people. Another is protection of human property, prevention of bears from becoming habituated to humans and human food sources.

Do tourists make your job harder?

BW: Most are with guides looking out for their welfare. We do get some tourists without a clue how dangerous these animals are, or how to remain safe. There’s definitely a bigger chance of something going wrong when there’s more people around. The more people, the greater the chance of an attack.

What was the scariest moment you’ve ever had?

BW: The attack last year. The call I took I hope no one has to take again, including myself, and it was a lady screaming. When I rolled up, the bear was on the street and I could see there was blood all over its mouth. Dealing with a bear, that part is easy, but knowing that somebody’s hurt sticks with you. Every time the bear phone rings now, it’s not, “Oh good, there’s a bear call.” Now there’s apprehension. You hope it’s not somebody screaming about an attack.

How much longer do you see yourself doing this?

Well, it was a three-year posting. This is year six. [Windsor left the position in 2015 and moved to Steinbach, Man., where he had worked earlier in his career]. The bear work I enjoy. This is the most unique district in our province, that’s why I wanted to come here. It’s like I tell my wife: I didn’t want to sit back in a rocking chair one day and say I wish I would have. And I don’t have to say that, because I’m here doing it.

To get a glimpse of the Churchill polar bears, go to explore.org to access a host of webcams and photos of the Manitoba bears.

Read more about Bob Windsor's time as a student at Lethbridge College in Wider Horizons.