With willows and rocks and a willingness to learn, James Smith and Warren Haayema approached the sweat 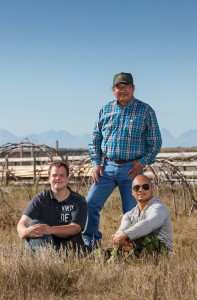 lodge for the first time in February 2014 with Lethbridge College Elder Peter Weasel Moccasin. They had started on this journey in the class of Terry Dreaddy, and as Weasel Moccasin says, “Once you start on a journey, there is no turning back. You just keep going. It’s very simple. My ancestors practiced it.”

Dreaddy, who taught Criminal Justice students a “Diversity Issues in Criminal Justice” course, had given the students an assignment that seemed simple on the surface. They had to pick a place where they felt uncomfortable, or where they didn’t understand the culture. Then they were to go out and experience that culture or group.

“We want to give the students the opportunity to be empathetic to a new culture or group,” says Dreaddy, who is now the college’s director for the Centre for Teaching, Learning and Innovation. “Some students go to Hutterite colonies, some to gay bars, some to the mosque or the Buddhist church, and some to the First Nations community. The idea is to help teach sensitivity and empathy for every culture and every person. If you approach every person this way – if you show interest and respect – you are going to come away with a greater appreciation of that culture.”

The assignment, and the generous involvement of the college’s Elder Weasel Moccasin, has changed the lives of Smith and Haayema.

“Terry said we had to get close to the experience, not just be a distant observer,” says Smith, who came to the college after having served eight years in the military, including a stint in Afghanistan. “We had to really be there, right there in the midst of it.”

“When I heard about the assignment, I thought it was almost a waste of time,” says Haayema. “But James and I talked about going to a sweat. I was raised with a lot of negative views toward the First Nations culture, a lot of wrong information.”

So the students approached their instructor, who put them in touch with Shanda Webber, the college’s manager for Recruitment and First Nations, Métis and Inuit (FNMI) Services. Webber helped connect them with Weasel Moccasin. “It was a match,” says Smith. “We connected with him right away.”

“He took us out for a sweat,” says Haayema. “And it changed my whole life.”

The day of the sweat, the two Criminal Justice students helped make the lodge. They gathered willows and rocks out of the creek and collected clay from badger holes. They made a circle and tied the willows after that.

“There’s a lot involved in a sweat,” says Haayema. “There’s a smudging ceremony, a sacred pipe. Glowing red rocks were brought in. We said prayers and sang songs. Time was really weird – it seemed like we were there for 10 minutes but it was an hour. There was definitely a spiritual presence.”

Smith said he was impressed by the welcoming attitude of the college’s Elder, who was joined by another Elder at the first sweat.

“They showed us how to make the lodge,” says Smith. “They were open with all of this information. Things I was told growing up – misconceptions, false information. There were a lot of things I did not know. It was very powerful – so rich in history and tradition. I understood what Terry was trying to do.”

Weasel Moccasin remembers seeing Elders at sweats when he was young. “They were always praying in their lodges, praying we can overcome the challenges we face, whether it was an emotional, mental, spiritual challenge or a sickness,” he says. “They were very serene and at peace with themselves. And that’s what I felt as a young boy.”

As a teenager, Weasel Moccasin recalls, he saw more of the spiritual side of his culture but didn’t fully understand it. “I talked about it but didn’t practice it, didn’t live it,” he says. “I did try my best to not be disrespectful.”

It wasn’t until his late 20s, when he had gone through some struggles of his own, that he returned to the spiritual part of his life. He started talking more with the Elders – the old people whose humanity, peace, love and contentedness he says he still misses today. And he started attending sweats with these men.

“It changed my perspective, the way I think, my attitude, my behaviour,” he says. “But it was a process. I was adding new information, learning new knowledge. I wanted to get to the point where I couldn’t waiver any more. It took years.”

Weasel Moccasin says it’s only been in the last seven or eight years that he has started to fully understand the work of the Elders of his youth. “This is what the old people were talking about,” he says. “This is why they were at peace. They accepted if a person was good or bad. They allowed themselves the spiritual strength that was in them. It has been a lifetime of work, of knowledge, of wisdom, of practice.”

After the death of his father about eight years ago, Weasel Moccasin said he was left with a message – one that led to the work he is doing today at the college with students of all ages and backgrounds.

“The message is to help people in the future through prayer and conversation,” says Weasel Moccasin. “I am not a leader, but maybe I can help in the college and in the community, to live in peace in and outside of the community, to help overcome barriers, to overcome prejudice and bigotry.”

Smith and Haayema say the college Elder has helped them do just that.

“It has been a spiritual journey for me,” says Smith. “When we began that first sweat, there was chanting going on and heat penetrating my skin. I was thinking, ‘There is something powerful and spiritual going on here.’ And I felt like I needed some of this personally.”

Haayema agrees – and adds that the experience has changed his future plans.

“My goal now is to be a First Nations liaison officer,” he says. “I also want to help bridge the Criminal Justice and the FNMI program here at the college. If not for this class and this experience, I probably would have had the same negative views toward the culture, the same negative views I was raised with. I want to raise my children with a better understanding of the First Nations’ culture.”

Their instructor, Dreaddy, says the two students have shared their experience with their classmates and changed the conversation in the classroom. “James and Warren have already become teachers and advocates for First Nations,” says Dreaddy. “They’re telling the other students about it. This has been an opportunity to show their leadership – and they’ve embraced the opportunity.”

Dreaddy praised the work Weasel Moccasin does for the college in general and that he has done for Smith and Haayema in particular. “He played a big part,” Dreaddy says. “What was special was that the Elder took a special interest in these two students. This is a real celebration of their effort and of the Elder’s work.”

Smith and Haayema have also continued to nurture their relationship within the Blackfoot community since that first sweat in the winter of 2014. Both Smith and Haayema have returned for regular gatherings and many other sweats. At one ceremony last spring, the two students were given Blackfoot names. “Giving a Blackfoot name to someone who is not a Blackfoot person is both an honour and a responsibility,” Webber says. “It’s given to someone who has made an important contribution to the community, and to someone who is committed and responsible for carrying that name, and continuing to support the community.”

“We can learn a lot from animals and give thanks to them forgiving their lives,” says Weasel Moccasin. “That’s what I saw in these young men. These young men are willing to learn. I really commend them. I commend them for their courage.”