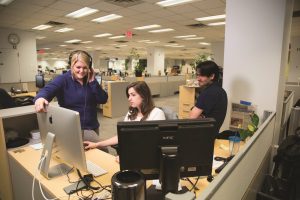 on their radios and televisions, read the latest newspaper articles, check their Twitter feed and watch how decisions in Canada’s and America’s media landscape unfold.

The college has been sending out graduates in communications fields for more than five decades, constantly adjusting to changing times and technologies. Two of those successful Lethbridge College alumni have opened up students’ minds with what their future might hold by connecting with them in the classroom from Toronto and Atlanta this past year. Anne-Marie Jackson and Rick Lewchuk are two examples of countless alumni who go out of their way to collaborate with the next generation of Lethbridge College students and help prepare them for professional life.

Anne-Marie Jackson spoke to the students last April. She graduated from the college’s print journalism program in 2007 but has worked with and for the newest technologies – just as students in the college’s newly revamped Digital Communications and Media are. In the seven years since graduation, she has created a video journalism niche for herself in Canada’s largest city.

While Lethbridge College’s program was largely based in print, Jackson says “that foundation was certainly the most important thing in my career, whether I went into photography or video or producing.”

Jackson worked part-time for the Lethbridge Herald while in school. After graduation, the industry was already rapidly evolving with journalists not only taking photos and writing stories, but also creating video to add to their pieces. She got a gig at the Edmonton Journal before moving to Toronto’s Globe and Mail as the industry began to invest in video journalism. From there her career saw her develop the Wider Image app for Reuters in London, England, that won her a multitude of awards. After that stint, she returned to Canada as a video producer for the Toronto Star.

Jackson says that being flexible as the industry evolves was key to her success and helped her take advantage of many opportunities.

“It’s a windy, windy road,” she says. ”The more you try and force something, the less it works. You just have to be open and move with the times and great things happen when you do that.”

She is busy creating nine shows for the Toronto Star’s website while filming and producing the pieces herself. Two full-time video editors who work under Jackson help the team push out video content daily with features on sports, business, food, entertainment and long-form documentaries. “I don’t think journalism is a dying breed,” she says. “I thinkit’s the way we provide access to people. Some journalism is an amazing collaboration between print, video, visual and it’s extremely powerful.”

Of everything she’s learned from her many jobs, Jackson knows that caring about the world and being open to exploring it are key to gaining respect from those you interview.

“Journalism is all about being honest and true to the people you are documenting,” she says. “It’s probably one of the most rewarding careers.”

The second Lethbridge College alum who (virtually) found his way back to the classroom last April is Rick Lewchuk, a 1979 grad who currently works as Senior Vice President of Creative Marketing at CNN Worldwide in Atlanta.

Flashing back to his time at the college, Lewhuck says there was no time for slacking once he found himself in Communication Arts. Of his original class of 24, only six graduated.

“It was not an easy program to get through,” Lewchuk recalls. “There was a lot of academic work as well and it’s not what people typically think about college.”

In his discussions with students in the program last year, Lewchuk revealed that those who are driven will be recognized.

Originally he had gone into the program without the intention of going into television, but an opportunity in school opened the doors to his passion. “The basketball team needed someone to film the game and I had some experience,” he says.

That willingness to step up and help out turned into a job at Lethbridge Cable and later at CJOC radio (94.1 Classic Hits). By Christmas time in his last year of his diploma, Lewchuk was offered a full-time job at CJOC. “I said yes, on the condition that I could finish college.”

Because of that decision, Lewchuk began the last four months of his program on the radio starting at 5 a.m. picking out records for his early morning 6 a.m. shift. Following that he’d attend classes for the day before going to the television station at 6 p.m. where he worked until 2 a.m. “I ate a lot of chocolate covered coffee beans,” he recalls of the last year of his program.

After graduating, he was offered a director of promotions job in Regina at Baton Broadcasting where he stayed until 1995. At that time, senior management wanted Lewchuk to represent the company nationally in a VP position. Baton Broadcasting became CTV and when that happened he was offered a job in Toronto working on program planning and as a promotion and senior VP of CTV’s creative agency and brand strategy.

When Bell bought CTV in 2010, it took the company in a different direction that wasn’t a good fit for Lewchuk. A noncompete clause in his contract forced Lewchuk to look beyond Canada for his next gig two years later. CNN just happened to be looking for someone with his skills and he is now the Senior Vice President of Creative Marketing.

When people hear CNN, they sometimes lump them in with other news channels like FOX or MSNBC – organizations which can be accused of being on the extreme right or left of the political spectrum. But Lewchuk still remembers his first day when he arrived in Atlanta.

“You are told that your opinion is your opinion and you keep your opinion to yourself,” he says. “You don’t speak with fellow employees about what your political opinions are.” He’s also quick to point out that CNN has resources covering news around the world, unlike other global news organizations. “We have journalists in all those far-flung places. We do real reporting and are not just picking up feeds from others.”

Lewchuk’s first role is to bring viewers to the channel and to read cnn.com. The second is to build a brand.

Reporting has evolved at an incredible speed; Lewchuk notices changes almost daily. A recent story brought CNN journalists to a remote area of Guatemala to report on immigrants making their way through Mexico to the U.S. border. Within a few hours, the crew was on the border with HD footage showing exactly what was happening. “We used to have satellite cameras and grainy images. Now we are instantly going live with this stuff and it really is incredible,” he says.

The next frontier will be drone technology, Lewchuk suggests. “Right now shooting footage with drones is illegal, but it will happen.”

Journalism has always led people to understand more about how interconnected we are. “If you can do that visually, I think it makes the world a smaller place,” Lewchuk says. “It has the potential to make the world a better place. I’m an optimist. We have a role in storytelling, instead of making decisions based on biases we have towards a different culture. When we can see it and experience it, I think that makes a ton of difference.”

Lethbridge College revamped its Communications Arts program and launched the new Digital Communications and Media program last fall. This new program has two streams – Digital Journalism, and Media Production and Advertising. The instructors are seeking students with the right attitude and drive to get the hands-on training they’ll need to succeed in a quickly-changing industry. Read more about this new program at learn.lc/digitalcommunications.

The Lethbridge College Endeavour kicked off its 50th anniversary year by publishing its first issue of the golden anniversary in October.

The newspaper is produced by Digital Communications and Media students and integrated into their program curriculum. Students sell advertising, write stories, take photos and design the Endeavour, which brings them hands-on, real-world industry experience.

“Fifty years is a milestone we are proud of,” said Martina Emard, Digital Communications and Media faculty, Endeavour publisher and a 1993 graduate of the communications program.

“The support from the community and the students’ hard work year after year is a testament to the Endeavour’s longevity. We’re looking forward to serving Lethbridge readers as the program evolves.”

To promote the anniversary, staff are digging into Endeavour archives and reprinting stories, photos and advertisements from previous issues on a special ‘blast from the past’ page.

The 50-year anniversary also turns a page within the program, with the new Digital Communications and Media program which launched this fall.

“The Endeavour will still have a presence in the community, but we will also be exploring video and online integrations, as well as promotion through social media,” says Digital Communications and Media faculty Kris Hodgson. “The new program and the Endeavour will continue to reflect changes in the media industry.”

The Endeavour is available every second Wednesday at distribution points around Lethbridge College and the university, as well as within select issues of Thursday’s Lethbridge Herald. To view archived issues of the Endeavour, go to learn.lc/endeavourarchives.