Agricultural programming at Lethbridge College will benefit from a record-setting $3.1 million gift from a family 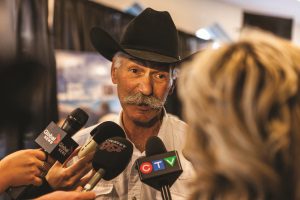 whose Alberta roots go back to its earliest days as a province, the college announced in October.

This remarkable philanthropic gift from the estate of Lloyd and Dorothy Mueller will transform the college’s agricultural programming and shape the future of the agricultural industry in the region, province and beyond. The donation was announced at an event in the Cousins Building that drew in a crowd of college students and staff, industry and community members, as well as many members of the extended Mueller family.

“My uncle and aunt wanted to find a way to advance the pursuit of knowledge through their legacy,” says the Muellers’ nephew, Michael Mueller. “They wanted to offer a benefit and make this available to as many people as possible and they felt a gift to Lethbridge College is the best way to do that.”

“Lethbridge College is extremely thankful for the generous gift from the Muellers,” says Lethbridge College President and CEO Dr. Paula Burns. “Through our engagement with industry, we identified a number of key opportunities and challenges affecting the agricultural sector.”

Burns notes that two-thirds of irrigated land in Canada is in Alberta, of which more than 70 per cent is in the Lethbridge

region alone. “Thanks to the Muellers’ gift, we are establishing the college’s first fully funded research chair,” she adds. “We will continue to mobilize and focus on our region’s unique assets, attributes and strengths, bringing industry, academia and community together to provide real-world training and apply real-world solutions within an industry that is critical to the social and economic needs of southern Alberta.”

The agricultural industry is changing at a rapid pace, with farms getting larger, more technologically advanced and increasingly reliant on collecting, analyzing and applying varied and complex real-time data. In addition to focusing on water use and environmental stewardship, the Mueller Program in Irrigation and the Mueller Applied Research Chair in Irrigation Science will also allow for research and development within the agricultural sector for the application of knowledge from data and the optimization of technologydriven irrigation practices.

The gift will support the college’s Possibilities Are Endless campaign, an effort to raise $25 million from the private sector to support a variety of goals and projects, including emerging priorities such as agriculture. The college has raised almost $20 million of its goal. The Mueller gift is the second major gift to the college this year that will benefit agricultural programming. In June, the college announced the Cor Van Raay Southern Alberta Agribusiness Program in partnership with the University of Lethbridge.

Lethbridge College Vice President Academic and Chief Operating Officer Stuart Cullum says that “just as this joint program is permitting us to work collaboratively with industry to address their needs – for example, developing business risk management curriculum with the Alberta Cattle Feeders’ Association – the Muellers’ generous philanthropic gift will allow us to continue to work directly with industry, government and other educational partners to further enhance data-driven productivity in the agricultural sector.”

The people behind the gift: a short look at the lives of Lloyd and Dorothy Mueller

The Mueller family has been present in the province since its earliest days. Lloyd Mueller’s father came to southern Alberta from Wisconsin in the early 1900s. Lloyd, one of 10 children born on the farm near Warner, always loved to learn and was largely self-taught. After serving in the Canadian Air Force during World War II, he returned to Lethbridge and became involved in several business ventures, from farming to running a garage to stock trading. He achieved much of his financial success in this last venture.

Dorothy was born in Bernard, Sask. She came to Lethbridge to study to be a lab technician, but the course was delayed for several months. She ended up taking a job in hospital administration at St. Michael’s Hospital in 1948 and stayed there for 35 years. Lloyd and Dorothy married in 1954 and lived the rest of their lives in Lethbridge. They loved travelling the world together and visited all continents except Antarctica. Many of their trips were agricultural tours, and they valued learning about the work others were doing in the agricultural industry in different countries across the globe.