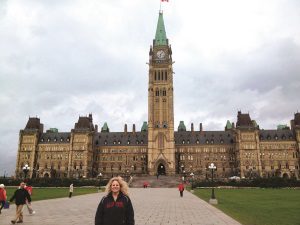 Since leaving Lethbridge College with a Criminal Justice diploma in 1986, Michelle A. Smith’s work with the RCMP has ranged from investigating murders and working as a bodyguard for Supreme Court justices to continuing her studies and working in witness protection. Today, she is a Staff Sergeant posted to the RCMP’s International Peace Operations Branch, working on policy, human resource issues, planning, information management and negotiating partnerships with other police agencies.

But wherever Smith’s work takes her – and it’s taken her to many interesting places around the country – she says she hasn’t forgotten the solid foundation that was laid during her days as a student at Lethbridge College. “Every day I utilize the skills and knowledge that I learned as a student,” she says from her home in Ottawa, where she lives with her husband of 20 years, who is also an RCMP officer, and four children ranging in age from 9 to 19. “Lethbridge College prepared me for a career in policing – I knew what to expect.”

Most recently, Smith says she found great satisfaction in her work “facilitating Canadian police officers to deploy to fragile states around the world.” She says she also found her posting in Source Witness Protection to be memorable. “I was part of the team that developed the first Source Development Units in the RCMP, which included the selection process and training program,” she recalls. “These revolutionary units investigate criminal organizations and focus on source recruitment. They have been highly successful in their mandate.”

While her training and education have served her well (she went on to earn a Bachelors and a Masters degrees with honours), Smith says her supportive husband and family have helped her achieve much of her success. “A work/life balance is possible, although not easy,” she says.

Smith says she loves living in Ottawa: “It’s beautiful with a lot of trees, activities, restaurants and culture and all of the historic buildings, Parliament buildings, the Supreme Court and the Governor General’s residence.” But she has dreams of retiring back in what she describes as the most beautiful province of all: Alberta.

Troy Reeb got his start in broadcast journalism when he was just 16, working at CFOK (AM) in Westlock, Alta., and studying Communication Arts at Lethbridge College. After graduating in 1988, he worked in radio and spent five years with The Canadian Press before joining Global Toronto in 1999.

He rose to become Ottawa correspondent and Washington bureau chief before being chosen in 2008 to lead Global News across the country. Today, he serves as Senior Vice President of Global News and Station Operations for Shaw Media.

Last October, Reeb was in New York to accept the prestigious Edward R. Murrow Award for Overall News Excellence in Network Television on behalf of Global News. The category has been dominated by U.S. networks for decades, and no other Canadian network has won the award in its 42-year history.

“It was tremendous recognition of not only Global News, but the quality of Canadian journalism overall,” says Reeb, who was named the college’s Distinguished Alumnus in 2003 and is the founder of a unique internship opportunity at Global for college Communication Arts students. “I’m proud to be associated with a college that is helping to shape future journalists who will build on the same world-class tradition of excellence.”