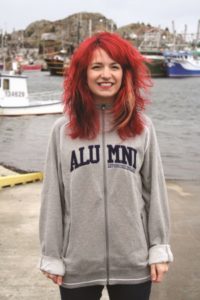 Janalynn Petten, who lives and works in the small fishing town in Newfoundland where she grew up, is pursuing a dream that started with a class assignment in the Fashion Design and Marketing program at Lethbridge College.

The assignment involved choosing a store and redesigning its entire concept, Petten recalls. “The idea was probably to choose a clothing store,” says the 2008 alumna. But having been introduced to a cupcake shop in Lethbridge earlier that year, she decided to redesign a bakery. “Fast-forward to a year ago,” she says. “That’s when my sister and I started selling cupcakes as a side business under the name ‘Best Kind Bakeshoppe’. We became so busy creating cupcakes that it’s now my full-time job. We’re currently at the point where we decide whether or not to open a small retail location.”

Petten says she learned many valuable lessons during her year at the college, especially that “creativity CAN be a part of your career.” That was a welcome change for her, after having started university to pursue a teaching degree. “When I realized being a classroom teacher wasn’t for me, I decided it was a perfect opportunity to pursue something creative.” Some of her best memories of her time at the college involved her assignments. “After four and a half years of 20-page essays and research papers,” she says, “it was a nice change to work on projects that involved colour.”

After graduation, she and her sister spent a year in Vancouver before moving back to Port de Grave. “Last time I checked,” she says, “the population was well under 1,000. It’s probably the most unexpected place to consider selling cupcakes. The scenery, however, is unreal. Imagine sitting down with your morning coffee – and cupcake – and whale-watching from your kitchen window. That’s home for me.”

English as a Second Language 2003

After earning his Bachelor of Commerce degree from Laval University, Rafael Hermosilla lost a job because of his poor English skills. Knowing that future professional success would require fluent English and French skills, he decided to enrol in Lethbridge College’s English as a Second Language program in 2003.

“To improve my English, I didn’t want to go to any school with a lot of Quebeckers,” says Hermosilla. He says he truly enjoyed his time at the college. “I made a lot of friends there and I learned a lot about different cultures,” he says. “It was interesting because I didn’t really have non-Quebecker friends in Quebec City, where I am from.” He also met his wife, Natsuki Kawashima, in the ESL program; she had come to study at Lethbridge College from Japan. The two have stayed in touch with her Lethbridge host family over the years.

Hermosilla now works as a supervisor/ planner at L3 Communications in Montreal, which repairs and maintains the C18 for the Canadian Army. “I like my job as I’m in charge of challenging mandates with strict budgets and timelines,” he says. “I definitely learn a lot of things that are very particular in the aeronautic industry. I like this constant learning process.”