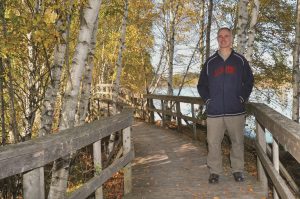 The 2½ years of thorough research, far-reaching interviews, relentless determination and resolute perseverance all paid off on Oct. 1 for 1999 Conservation Enforcement grad Craig A. Smith. That was the day a provincial court convicted Greg Logan of New Brunswick of illegally exporting 250 Narwhal ivory tusks to the U.S.

Smith, the manager of operations in the Maritimes for the Wildlife Enforcement branch of Environment Canada, supervised the team of investigators of “Operation Longtooth,” which will go down in the record books as one of the largest protected species smuggling investigations in North American history. After his conviction, Logan was fined $385,000, forfeited his 2005 Chevy Avalanche, was prohibited from possessing any marine mammal part for 10 years, and was confined to an eight-month conditional sentence – the largest penalty in Canada for wild animal smuggling offenses.

And it was all in a day’s work for Smith, who has wanted to work with wildlife since he met a game warden when he was about 5-years-old on a hunting trip with his dad. The New Brunswick native credits his time at the college with opening doors to a challenging and satisfying career.

“I had worked for about five years as a New Brunswick conservation officer when I realized that to advance my career, I needed a degree,” says Smith. “I picked Lethbridge College for its Bachelor of Applied Science-Conservation Enforcement program and travelled more than 4,500 kilometres because it had the perfect program that would recognize the experience I had, and provide the real-world educational opportunities I needed to move ahead.”

Today, Smith is responsible for federal enforcement officers and legislation in Nova Scotia, New Brunswick and Prince Edward Island, including protecting migratory birds, species at risk and National Wildlife Areas and Migratory Bird Sanctuaries, as well as investigations involving the international and interprovincial trade in endangered species – such as the one that led to the Narwhal ivory tusk conviction last fall.

Pierre-Charles Dillon, who moved to Prince Edward Island after earning diplomas from Lethbridge College in Renewable Resource Management in 2008 and Fish and Wildlife in 2009, says there is a part of him that will always be an Islander. But that feeling comes not from a lifetime spent in Canada’s smallest province, he says, but rather from having lived in different communities in Europe and Canada and taking bits of every place with him wherever he goes.

Dillon was born in the United Kingdom, lived in France until he was 16, and moved to Manitoba before coming to the college. After graduation, he left to be near his parents in Charlottetown and worked in a variety of seasonal jobs. “I worked on many great and interesting projects on PEI,” says Dillon, “including time at the Macphail Woods Ecological Forestry Project where I worked on doing forestry management plans.”

But the lack of permanent jobs on the island and a desire to continue his education led Dillon to return to school in 2012. He is far from the pastoral landscape of PEI but still in a familiar place… across the coulees at the University of Lethbridge, where he is pursuing an environmental science degree.