Dr. Paula Burns had much to take in when she made her first trip to Lethbridge last fall – and she noticed it all. 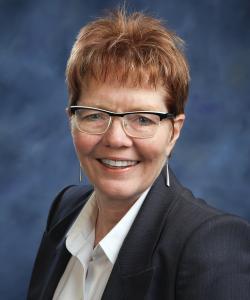 She saw a vibrant college where people seemed genuinely happy to be at work and in class, a growing city that is home to an increasingly diverse population, and mountains that are close enough to hike in on any pretty day.

And then there were the running trails – the dirt and paved pathways that meander up and down the coulees, across the river and through miles of parkland. As an avid recreational runner, Burns knew she could feel at home on those trails.

She’ll get her chance to discover them soon – as well as the college, city and mountains that looked so appealing when she came to interview last fall for the position of President and CEO of Lethbridge College. A few weeks after her visit, the Lethbridge College Board of Governors announced that Burns was its choice to lead the college into its sixth decade. She starts work on Feb. 4.

The board’s decision came at the end of a seven-month international search and interviews with many talented candidates – and the search committee, board and college community are thrilled with the choice.

“The board firmly believes Dr. Burns is an outstanding candidate to boldly lead Lethbridge College to the next level of aspiration and achievement,” said Board of Governors Chair Randy Jespersen. “With a wealth of experience developing government relationships and building strong community partnerships, she will be an excellent advocate for the college.”

Burns will succeed Dr. Tracy L. Edwards, who announced her resignation in April 2012, and Peter Leclaire, who has been serving as Interim President and CEO since Edwards’ departure at the end of last June.

Currently Provost and Vice President Academic at NAIT in Edmonton, Burns has spent more than 10 years in postsecondary leadership roles. Her previous work experience is sure to serve her well at Lethbridge College. She has worked with and in a variety of departments across post-secondary institutions, from teaching to curriculum development to leadership positions.

These experiences align well with the successful programs and well-developed plans Lethbridge College already has in place. They also will allow her to start her work with a well-established understanding of how successful programs, departments and post-secondary institutions operate.

Reached a few days after her appointment was announced last November, Burns said she is looking forward to getting to work at a place that felt right from the start.

“It’s all about the fit – what does a particular institution need that I can bring, and what does it offer in terms of learning opportunities for me,” she said. “The whole feel and energy and culture of Lethbridge College needed to connect with me for it to be the right place – and it did. The size is perfect. The people I’ve met are all so friendly and welcoming. The city itself is appealing and close to so much. I love hiking and to have the mountains so close is fantastic. I am a runner and love seeing all of those trails and paths all over the city.”

From a leadership perspective, Burns said it’s an exciting time to be in higher education. There are certainly challenges facing all post-secondary institutions, she noted, especially when it comes to funding, but she also sees that as a real opportunity. “That challenge really motivates us to think about how we can do things differently, more efficiently, more effectively,” she said. “If we don’t innovate, we’ll move into slow death. Lethbridge College is so well positioned. There is already a great foundation for innovation; there are well-established flexible learning pathways and online learning opportunities. We have a real opportunity to differentiate ourselves as a college.”

Burns, who has four children (Kelson, 11; Darby, 13; Karleen, 16 and Ashton, 17), said she feels fortunate to work in the college sector. She explained that “we can respond more quickly and with more flexibility to the needs of the marketplace.”

Burns undertook many of those educational opportunities while working full-time. Her early work experience includes holding several positions at the Michener Institute for Applied Health Sciences in Toronto from 1994 to 2008. Starting as a respiratory therapist faculty member, she went on to work as chair of the department and coordinator of the program. She continued to teach until 2003, even while coordinating the institute’s distance education program. Staying within the Michener family, she later went on to work as a curriculum consultant and director, and eventually was named vice provost of the institute.

She left Michener for NAIT in 2008, first to work as associate vice president of Academic Affairs and most recently as Provost and Vice President Academic. In her most recent job, she was a member of NAIT’s executive team and provided leadership and direction to many groups and departments around campus.

Paula Burns will be the eighth president of Lethbridge College. The first seven presidents led as the college grew from its inaugural class of 38 students who met in the wing of a local high school to more than 4,000 students attending classes at the college’s six southern Alberta campuses today.