Some of the world’s most pressing problems are being solved right now, on the fourth 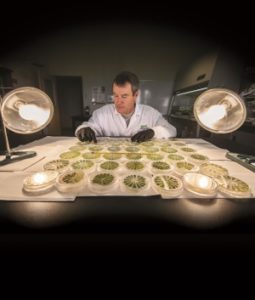 floor of the state-of-the-art Cousins Building at Lethbridge College, in the most unassuming of places – petri dishes.

Inside those petri dishes are different strains of algae, the efficient organisms that can be grown in ponds, seawater, saltwater, freshwater and even contaminated water. What makes the work on the fourth floor of the Cousins Building so exciting – and one day, perhaps, life-changing – is how efficiently algae do their job. Algae can generate more oil per acre compared to plants like canola and, in theory, algae can produce oil even more efficiently when fed greenhouse gases and sewage.

In short, algae fabricate their useful fuels with incredible efficiency, while cleaning up other environmental problems at the same time.

It’s a recipe for success being explored by scientists and biotechnology companies around the world. And one aspect of the research is being done here at Lethbridge College, thanks to the partnership between biology instructor Tom Graham and his students and Lethbridge-based Phytocentric Biotech Inc. The end goal of their research – which is one small section of the algae research puzzle – is to enhance and even breed new strains of algae that will allow for the most efficient production of oil.

Ultimately, Phytocentric would like to license out its algae to algae farmers in the industry. In the next year or so, according to Phytocentric President and CEO Trevor MacMillan, the college and company should be well on their way to doing that. Eventually, the oil produced by these strains of algae will be used in the “nutraceutical” industry, providing the important omega-three fatty acids and other antioxidants to the makers of supplements and health food products.

“I really think there is a lot of potential in algae’s application to solving some of the world’s problems,” says MacMillan. “Research on algae addresses issues of waste management, sequestering carbon dioxide emissions and providing a source of food and fuel for the world.”

Graham, who has been a full-time instructor at the college since 2007, is delighted to be a part of the process – and especially pleased that students can play a role in this applied research project.

“For our students,” says Graham, “it really helps their resumes to have true lab experience.”

The college also involves third- and fourth-year students from the University of Lethbridge, who in turn work with full-time researchers. All of the students benefit from working with Graham, MacMillan, and the full-time researcher working on the job, Farkhanda Khowaja.

“This project provides an environment where students are able to learn some of the skills that are used in the industry today,” says MacMillan. “It provides a real-world kind of work environment for the students to learn in.”

The work on algae is just one applied research project Graham juggles in his lab, which he calls “the biggest playground you’ll ever find.” He is also working with Hyperion Research Limited on research into Giardia, one of the worst parasites found in water supplies in North America, and is in the midst of negotiating other proposals involving biofuels and biodiesel research with Kyoto Fuels Inc.

Maintaining an active research agenda is an essential part of Graham’s work as a teacher.

“If I’m going to be a good biotech instructor,” he explains, “I’d better be able to walk the walk.”

MacMillan says he is pleased to be able to partner with Graham and the college.

“It really has been amazing,” says MacMillan. “Without the college’s and Tom’s and the students’ help, we really wouldn’t be where we are today.”