Sean vividly recalls the night, about two years ago, he was hoping to make a drug buy when the suspect 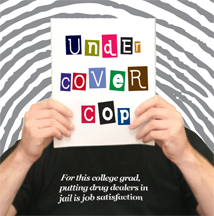 with whom he was negotiating suddenly asked him if he was an undercover cop.

The target, from Regina, had cocaine to sell, and Sean, sporting a long beard and wearing earrings, was close to making a deal in a downtown Lethbridge bar when the question was posed, with the added comment: “All the UCs in Regina wear long beards.”

“He pulled out a knife, likely not to use, but just to let me know he had it,” says Sean, a member of the Lethbridge Regional Police Service’s seven-person undercover team. I told him to put the knife away. Then we bumped knuckles and he was happy to deal cocaine with me.”

The evening’s success hung squarely on Sean’s ability to react to that split second of suspicion. Even though police back-up was nearby, a flicker of indecision would have cost the squad considerable time and resources and, perhaps, had a darker ending. Sean and the squad’s supervising officer, Mike (not their real names) downplay the movie-style drama their jobs entail, but don’t entirely disagree it involves an element of danger. While Sean shares high-fives with knife-carrying dope-dealers, his young wife waits nervously at home, he admits, eager for the day when he can leave for work as the big, likeable guy he really is.

“The satisfaction of helping put away drug dealers outweighs the danger 10 to one,” says Sean, who graduated from the Criminal Justice-Policing program at Lethbridge College several years ago. “The laws are in place, and so are the penalties; we have a high conviction rate.”

Sean has spent four years in what is officially known as the Special Operations Unit, and is nearing the limit for undercover work. Made up solely of volunteers, the team’s main focus in Lethbridge is drug enforcement. The type of deep-cover, Donnie Brasco-style of crime infiltration is not a common occurrence in the province; most of the cases worked here are shorter and far less life-threatening. Still, the team trolls the dark side of life in Lethbridge looking for bottom-feeders, and the safety of each member is paramount.

“Safety is number one over everything else,” says Mike, who selects and trains recruits from among the 150-officer service. “We know who can do this type of work. We get the people who want to be there. It takes you a couple of years to learn the ropes, and then you get good at it. Most newcomers admit they had no idea of what we actually do. The more time you do on the street, the better you’ll be.”

When approving members for undercover work, Mike probes their records as uniformed officers. He looks for diligence, creativity and innovation, and a minimum of five years on the force. They also have to be willing to leave some facets of a normal family life behind.

“You don’t have a presence on Facebook,” says Sean. “And when you’re socializing, you do it out of the public eye. The hardest part for me is not being able to go out for a beer with the guys after work. You have to be more careful. When you go out to a movie or for dinner, you always take a good look around to see who might be in the room. Uniformed officers can be well-known; you can’t hang out with them in public.”

Altered physical appearance also plays a role, and each member of the squad has the chance to experiment with different personas and looks, changing up clothes, facial hair, jewelry and the like. But truly outrageous outfits are out; as the prey has learned to dress for success, so have the hunters.

“The ponytails and body piercings might have worked in the 1980s, but they’re old-school now,” says Sean. Your average drug dealer is no longer a long-haired hippie freak. They’re very GQ, very upscale. In fact, getting too unkempt can work against you.”

Like that night two years ago. The bad guys have also changed in a darker way, says Mike. Not long ago, another undercover officer was robbed and had his life threatened by a suspect. Mike believes this officer had been “made,” and the people he was tracking had planned to murder him.

“That was scary, because even though they knew he was a cop, they planned to hurt him anyway,” he says. “Most suspects, when they find out you’re a cop, just won’t deal with you anymore.”

Officers also require an inherent ability to adjust instantly to the unforeseen.

“You have to be able to change your story and be able to answer questions,” says Sean. “Half of it is planning and half is off the cuff. If he says this, you say that. If you go in prepared for 100 scenarios, you’ll have that 101st thrown at you. We use the KISS principle: keep it simple, stupid. You have to come on just right; too strong, and they’ll suspect you’re a cop; too weak and they’ll think you’re not really interested.”

Drug trafficking in the city – yes, Lethbridge, it exists here; the drug of choice is cocaine, with marijuana second – has changed markedly since, say, the 1990s when most of the dealers were local. Now, the drug trade is far more organized and the people Lethbridge’s undercover squad are after are much more transient. In a way, that transience works in the squad’s favour in that they are harder to make as cops. And when they do have to “come clean” to testify in court, their cover is blown on a far smaller scale. Testifying is a necessary part of the job,” says Sean. “If you don’t, all your hard work is blown.”

In court, identification is the prime issue, rather than the drugs seized. Often, a year can go by before a suspect is brought to trial, and the accused often find it advantageous to upgrade their appearance for their court date.

“You can be sitting there and you have to think back to what that person looked like the night you bought the drugs,” says Sean. “Only now he’s clean shaven. Your note-taking at the time is critical.”

Some witnesses have been known to lie under oath.

“You know 100 per cent he’s the guy you bought from, but then a friend will lie on the stand and give him an alibi,” says Sean. “That happened to me once when a girlfriend swore the suspect was with her on a particular night. She remembered perfectly, even though it was two years ago and she was a heavy cocaine user. That’s a frustrating part of the job.”

In many such cases, an accused will opt against a jury trial, knowing a judge understands the intricacies of identification. In a small city, most squad members are also known to most defence lawyers, but while the two sides can tangle in court, the adversarial role ends there.

“We know they’re doing the best for their clients in court,” says Mike. “But if they saw one of us on the street working, none of them would point us out. They’d never harm us personally.”

Undercover officers in Lethbridge also help with investigation and surveillance, due to the department’s small size. This is an advantage for an officer seeking career advancement.

“Because we’re a small force, you get to see the entire range of duties, not just drug enforcement. I think any officer is five times the officer he was before going undercover.”

As seen on TV, the squad is always interested in catching bigger fish. Using informants, they seek to make busts further up the food chain. Drug buys at this level are satisfying, says Sean, who once managed to purchase from a dealer who was on a higher level than run-of-the-mill dealers.

“I tried for six months, and nothing,” says Sean. “Then one night I made yet another call, and he was willing to meet with me. A month later, he was arrested with five ounces of coke.”

On another occasion, while working surveillance on a suspect with several outstanding warrants, the team saw him purchase drugs from a person not on its radar. Members started an investigation on the supplier resulting in an arrest and seizure of five ounces of cocaine and $50,000.

On another occasion, the squad worked up file on a supplier who was identified as being from Calgary.

“We we shared our files with our counterparts in Calgary,” says Mike. “They wound up making the largest bust in Calgary’s history at 80 kilos. Due to its ties to organized crime, the case even made Dateline.”

Sources, obviously, are a major tool in the squad’s arsenal, and few are what would be termed upstanding citizens. They turn informants for a variety of reasons, and each officer has to weigh the veracity of their information. Revenge is one of which officers must be wary. There are more noble reasons.

“They might, for instance, disagree with home invasions or selling drugs to kids,” says Sean.

To properly set a hook, an officer will attempt to make multiple buys from the same suspect. When the time comes for an arrest, they typically watch from a distance, savouring the results.

“We love our jobs,” says Sean. “We get along well with each other and work in a team atmosphere. The guys are very dedicated; they’ll put in a lot of their own time, speaking to sources or at home getting personal with our files. Rather than being reactive, we try to be proactive. You’re never on your own; the whole team is focused on each case.”

Despite the adrenalin rushes, undercover work doesn’t leave an officer’s life in tatters. There are no long stretches spent as members of a gang, and team members go home after their shifts to regular families. Each member has to decide how well they trust their friends before telling them they’ve gone undercover.

“I got a new neighbour once,” says Sean. “For 2½ years I told him I worked elsewhere, and then finally confided in him. He had no idea.”

Officers keep an eye on each other to ensure no one is playing their part a little too enthusiastically. If they are, they’re sent for psychological testing in Calgary.

For Sean, undercover life won’t last much longer. He’ll return to regular duty, perhaps seek promotion, assist the squad’s new members by sharing his expertise the way it was given to him by others who went before. There will be other outlets for the thrill ride it’s all been and the satisfaction it’s provided.

“I worked two or three years on a two-kilo job. It took four years to come to trial, but he was finally found guilty. Most satisfying part? He made the statement to several people the cops would never get him.