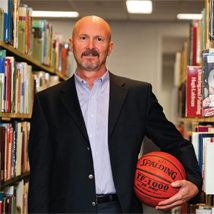 The clock shows 38 seconds left and the Kodiaks on the short end of a 71-68 score. The coach has called time out to discuss strategy in these final few seconds that will either send the Kodiaks to the podium or packing for home.

The game restarts: Kodiaks’ ball and the defence is swarming. Crowd’s in an uproar as bright red lights tick down the season. For 12 Lethbridge College students, learning has never been so intense.

The fictional situation above is pretty close to reality more than once a season for Kodiaks basketball players, while those engaged in other sports take on different challenges of time, score and competitor.

To Bill Dean, Lethbridge College’s new athletics manager, all are learning experiences that cannot be duplicated in a classroom, but are, nonetheless, educational opportunities teaching skills that relate to successful careers.

“At a post-secondary institution such as ours, a lot of learning takes place out of the classroom,” says Dean. “When our 150 or so athletes are competing, they’re learning skills employers want.”

Dean came to Lethbridge College last August from Grant MacEwan University in Edmonton where he was director of Student Life. His deep, 27-year background in sports administration, and his belief in placing academics first, made him a key find.

Competitive athletics, such as those included in the Kodiaks program, are also a key marketing tool for Lethbridge College.

“The media coverage afforded sports gives an institution the best bang for each marketing dollar in terms of media exposure,” says Dean. “Athletics also creates pride among other students in their school, provides a positive social outlet and allows students to celebrate the success of fellow classmates.”

Studies also calculate that for each athlete recruited, two to three acquaintances will follow suit, influenced by their friends’ choice of schools.

Sports, too, is often the first exposure young people in the community have to Lethbridge College, either because they came to watch a Kodiaks game or played here in a high school tournament.

“Athletics makes a positive connection to the community,” says Dean.

And, sometimes the community makes an impression on the athletes. Bertil Johanssen, Lethbridge College’s cross-country running coach, has been recruiting runners from Kenya for years now, making his teams perennial winners. Now, says Dean, many of the Kenyan athletes are choosing to stay in Lethbridge after graduation, adding to the area’s cultural diversity. They’ve created community pride through their successes on the national stage, and have alternatively developed their own pride in the community they’ve represented.

The father of two teenage girls, Dean intends to maintain a Kodiaks initiative to make academics a priority. Once they’ve taken that last turn on the court, Dean wants them back in the gym – to receive their diplomas on graduation day.

“Most of our athletes won’t make careers out of sports,” he says. “Their academic achievement has to come first. Fortunately, 80 to 90 per cent of them are good students who excel in class. And the growing transfer opportunities attract athletes looking to continue a degree program elsewhere upon graduation.”

While this renewed excellence in academics is evident across all Kodiaks teams, Dean admits women generally do better, although the gender factor may well be college-wide and not confined to athletes.

“The coaches we recruit must understand students are here for an education,” says Dean. “We look for candidates with strong teaching backgrounds because those people are better able to

interact with, and teach, our athletes.”

This year, the Kodiaks program is again involved with soccer, cross-country, basketball, volleyball and golf. Joining those five sports this month is futsal (see story below). Any greater expansion will come only after the program achieves financial stability.

Should sports be added one day, they might well be untraditional collegiate endeavours, such as snowboarding and triathlons.

“The sports offered in the ACAC (Alberta Colleges Athletic Conference) haven’t changed for years, but student interests have,” says Dean. “We need to take that into consideration.”

Meanwhile, it will be a traditional sport that puts Lethbridge College in the national limelight again some 14 months from now when the campus again hosts the final eight for the Canadian Colleges Athletic Association’s women’s basketball championships. The tournament was held here in 2006.

This month, Kodiaks will have another reason to stay indoors.

Men and women will be preparing for their first season of futsal, played for some time now throughout the Alberta Colleges Athletic Conference (ACAC).

The game was invented in Uruguay 80 years ago as a gymnasium training activity for soccer players. Unlike traditional indoor soccer, futsal does not use “hockey rink” boards. Instead, deft ball control is required to keep play inbounds. Teams consist of five players on court at a time (including a goalie), with unlimited substitutions by seven other team members. Goals are considerably smaller in futsal, and a size 4 ball is used, slightly smaller than soccer’s size 5 and underinflated to reduce bounce.

In the ACAC, futsal is played in tournament format, rather than in a league. The Kodiaks will play Jan. 21-23 at Mount Royal University; Feb. 11-13 at Olds College, and March 4-6 at Lakeland College in Vermilion.

On the world stage, six futsal world cups have been held for men since 1989, all won by either Brazil or Spain. As of last September, those two counties were ranked first and second, respectively, followed by Italy, Iran and Russia. Top five on the women’s side were Brazil, Spain, Colombia, Portugal and Ukraine.