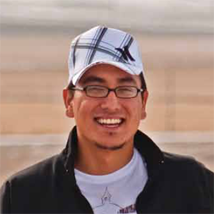 Ty Provost is a bit of an adrenaline junkie. At three, his dad had him – and his four siblings – riding horses on the family ranch near Brocket. In his teens, he knew how to break a horse and was soon competing in rodeos as a bronc rider.

So it’s merely an extension of his apparent need for excitement that he is only months away from a career climbing 90-metre wind turbines.

“The second day of training they had us to the top of a tower near Coaldale,” says Provost, a student in Lethbridge College’s Wind Turbine Technician program. “It was a bit windy and you could feel the tower swaying a little. You have to be immune to motion sickness, but it was enjoyable.”

The young Piikani Nation resident will graduate from the program this spring and, like most students who complete the program, will be snapped up by an employer. His success, besides his own rodeo-hardened determination, was aided by a $10,000 scholarship from Enmax Energy Corporation, offered last year to an area First Nations student entering the program.

The award covered his books, fees, living expenses and tools; his tuition was paid for by the Piikani administration. It was a nice score, but Provost came within a hair of missing the opportunity. After signing up for the program, he happened to be visiting the campus one summer day to inquire about a possible living allowance. The program is split between Lethbridge and the college’s Fort Macleod campus, and, with a young son, Provost needed to be closer to school.

“I was just lucky,” he says. “I was at the college and ran into Robin (Little Bear, Lethbridge College’s First

Nations, Metis and Inuit Services manager) who also just happened to be there and told me about the

Enmax scholarship. I filled out the application the same day the panel was meeting to make a selection.

Without the award, I would have needed a student loan. As a father, I was worried about how I would support my son.”

Provost graduated from Catholic Central High School in Lethbridge in 2008, where he was part of the school’s hockey academy. (He played for the Midget AA Taber Golden Suns.) He investigated agriculture programs, but ultimately enrolled in the college’s General Studies program while he contemplated a career move. When a friend completed the Wind Turbine Technician training, he was intrigued.

With high marks in mathematics and completion of his safety tickets, Provost was a perfect fit for the program.

“It’s a growing field, that’s for sure,” he says. “My friend went to Pennsylvania; now he’s back working here. I’d like to stay in southern Alberta, but I’m prepared to travel.”

Provost could end up working for the company who sponsored his education.

Enmax owns the Kettles Hill wind farm at Pincher Creek, and the Taber wind farm, largest in Canada. The firm intends to revisit its scholarship for the 2010 program intake.

Doris Kaufmann, senior media relations advisor for Enmax, says the company was drawn to the  Lethbridge College Wind Turbine Technician program because of the firm’s increasing link to alternative energy sources and the growing need for skilled trades people. “

Enmax is involved with pilot projects involving wind and solar energy and is determining how those might be rolled out to the public,” says Kaufmann. “Before we bring them to market, we want to make a contribution to student knowledge. Clearly there will be a greater need for skilled people to fill the jobs of the future; it makes sense, as a creator of those jobs, that we’d be involved in their education.”

Lethbridge College was the first North American institution authorized to deliver the BZEE training program in September 2007, and is now the designated lead institution for BZEE certification for North America.

Provost has already promoted the program to friends, but his endorsement comes with a warning.

“They love doing things with their hands and some are interested,” he says. “But I warn them there’s a lot of book learning, too. You have to be dedicated.”

Last month, Lethbridge College erected a 22-metre wind-turbine tower south of its trades building. The tower, minus the turbine and blades, will allow students in the Wind Turbine Technician program to practise ascents and descents, a key element in their training and vital for their future safety on the job.

Previously, students practised on the city’s old water tower (now home to Ric’s Grill). The tower provides them with a more realistic and convenient venue.

Lethbridge Airport. The city and county also approved its installation.