The sedimentary rocks exposed in the Milk River valley were formed 85 million years ago at the edge of a great inland sea. Meltwater began eroding the soft sandstone after the last ice age and formed the coulees and hoodoos. 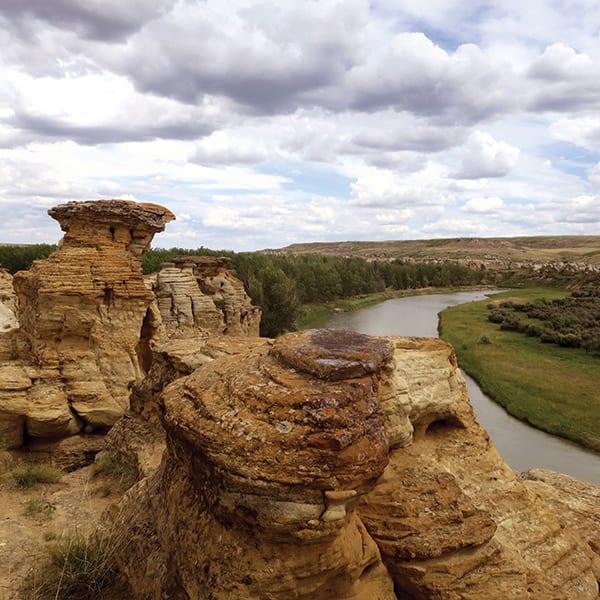 As far back as there have been Blackfoot people walking through this area, they have gone to Aísínai’pi (Writingon- Stone). The stories from the old people tell us that there was never a battle there. The Blackfoot have, since time immemorial, looked at Aísínai’pi as a sacred site and a safe place for passage. Even the enemy tribes and visiting tribes, they did not battle there. And they did not tamper with those drawings.

The old people say it is a spiritual place, a place of significant human and spiritual import. The valley that includes Aísínai’pi, and the whole of Kináksisahtai (Milk River), has probably the most abundant pictographs and petroglyphs in Blackfoot territory and possibly all of North America. Those drawings at Aísínai’pi were to be there forever and ever, and they are not to be tampered with. These are places where you make an offering when you visit, of tobacco or berries or a bit of meat.

All of the writing may look simplistic to the viewer. But just one circle is probably 1,000 words. And what’s behind that circle, a perfect circle that was drawn with sharp bones or sharp rock? Every petroglyph had to have some very deep significance to be drawn there. And the people who drew these petroglyphs probably had some very deep and profound reason to create that drawing. The early people put their markings on the rocks, and each of them has a story. Each of the drawings has a story. And so people say 500 years ago they made these drawings. It could be true. And other people say well, why not 5,000 years ago? That also can be true.

It is interesting to ask non-Blackfoot people, before we tell part of the story from a Blackfoot lens, “What did you get out of visiting Aísínai’pi? What do you think it means?”

Many people visit Aísínai’pi year after year, and it’s an honour that some people have of hearing song, voices and prayers. Others may go over there and never experience anything. And so it’s not for them at that time. It all depends on their respect for land, respect for the metaphysical world. And if somebody is not in tune with that, they will not experience that. They will not hear the sounds or voices or singing.

For the Siksikaitsitapi (Blackfoot people), we feel it every time we go there. We’re so in tune with our ancestors and our lands. Like Ninaiistáko (Chief Mountain), we feel something every time we go to Aísínai’pi. And so we pray, or we put tobacco, out of respect for the Ancient Ones that we come not to harm them, not to disturb them, not to destroy, but we ask for knowledge through the dream world of what those stories mean. 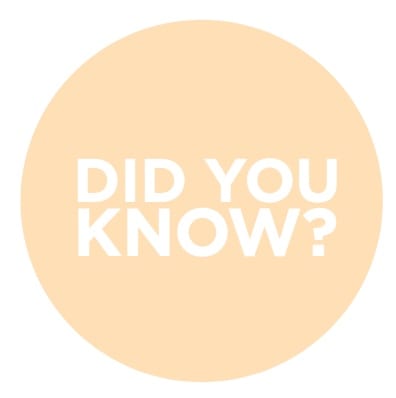 A great way to experience Writing-on-Stone Provincial Park and the surrounding landscape is through a day or multi-day canoe or kayak trip. If you don’t have your own mode of paddling, you can rent canoes and kayaks in the town of Milk River. Options exist for everything from overnight to week-long trips, depending on where you start. There are also convenient campgrounds along the way, such as popular Poverty Rock. Flow rates drop throughout the summer, with June and July having the highest flow. If you haven’t paddled the Milk River before, join a local club or community where you will find plenty of advice and knowledge. 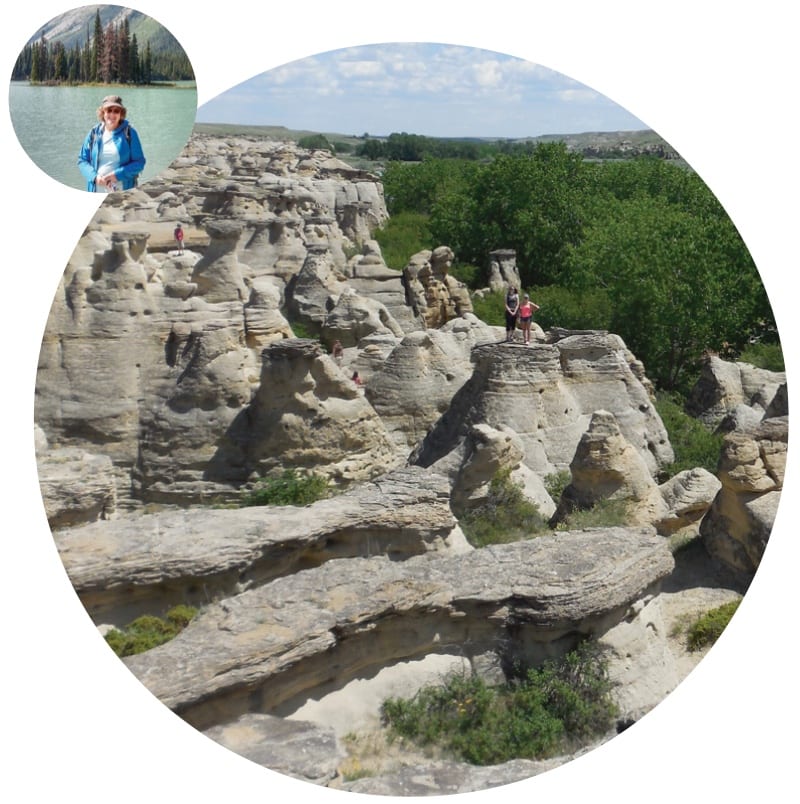 WHAT MILK RIVER MEANS TO ME

Story and photo by Diane Fjordbotten, coordinator of the Learning Café

What do the mountains mean to me? I’d like instead to talk about some remarkable southern Alberta landscapes that aren’t mountains but are still important to me. First is Devil’s Coulee near Warner, where 10 fossilized dinosaur eggs were discovered in 1997. The Devil’s Coulee Dinosaur Heritage Museum has both dinosaur fossil displays and artifacts from settlers, but my absolute favourite activity there is the Devil’s Coulee site tour. I love walking around the coulees, hunting for fossils in the dry bentonite clay – and finding some! So. Much. Fun.

Second is Writing-on-Stone Provincial Park, which holds a special place in my heart. Hiking and climbing around the hoodoos with their haunting, wind-sculpted shapes are family-favourite activities. The petroglyphs and pictographs on the sandstone cliffs of the Milk River valley tell personal histories of the Blackfoot people, from ancient times through colonization. I was fortunate to have an Indigenous park interpreter on one of my many site tours, and her stories were powerful and meaningful beyond the beauty of the location. She told us that the Blackfoot people believe that the spirits of their ancestors are found in all of nature, and just as she was speaking an enormous, majestic buck appeared at the edge of the cliff. I would swear he listened to her stories while he watched our group for several minutes. This experience was profound and spiritual, and for me it underlined the importance of story and learning from place.

Great place to eat: Hickory Street BBQ in Stirling (206 4th Avenue) is a delicious place to stop on your way going to or coming back from a day at Writing-on-Stone.

Hike with breathtaking views: The Hoodoo Trail (5.6 km each way) is one of the coolest hikes around. Bring lots of water and watch for snakes... and make sure you add this to your list this summer!

Got kids? Even preschoolers can navigate this trail, especially if you happen to come with friends and leave a car on one end so you can ferry the younger hikers back.

Looking for dinosaurs, but don’t have time to go to Drumheller? Stop by Devil’s Coulee Dinosaur and Heritage Museum in Warner – home of Canada’s first dinosaur nesting site. 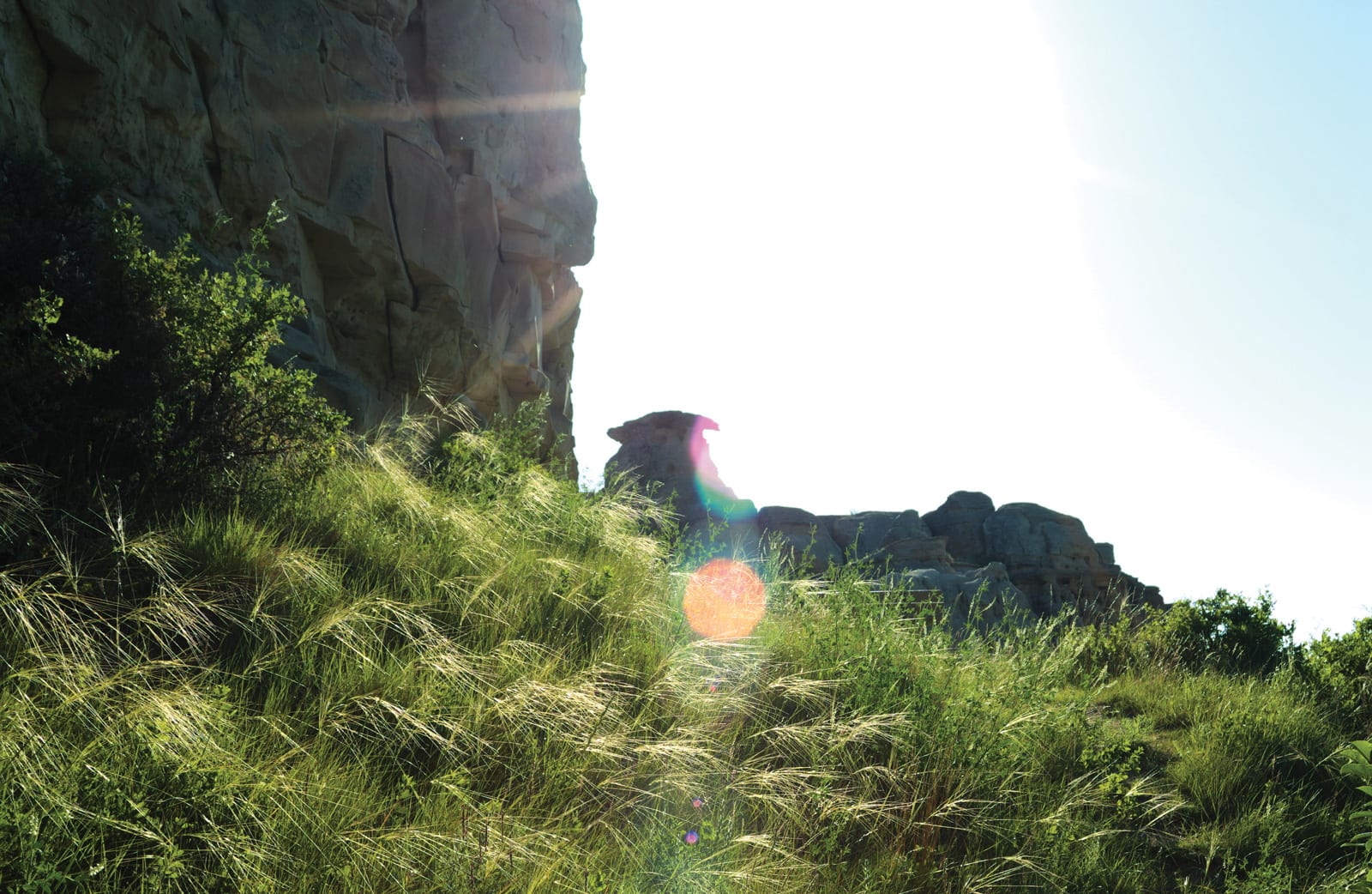 Have you ever seen a hoodoo? What about a tent rock? How about a fairy chimney? These are just a few of the names of the unusual landforms found at Writing-on-Stone Provincial Park. These sedimentary rocks along the park’s valley edge make for an amazing and enlightening stroll upon this UNESCO World Heritage Site. This is a special place – not just for the tourists, but more importantly for the Blackfoot people. The park contains some of the best archeological engravings and drawings on the sandstone walls in the valley.

These sandstone walls and formations developed from what once was the edge of a giant and ancient inland sea. This incredible habitat provides not only unique animal species, but also amazing flowers and cactus. The self-guided trail along these sandstone formations twists and turns along the edge of the Milk River, at one point dropping down to the valley floor to provide views of the sandstone rock walls rising above. Every turn you take provides an opportunity to stop and appreciate something incredible, even if for just a moment.

My advice? Take your camera and take your time. Staying on the trail is important in this area. The sandstone is fragile and easily eroded by excited and eager footsteps. Don’t let that discourage you as there are plenty of views, and maybe, just maybe, some appreciative and interesting little finds if you pay attention to the details along the way.

Story and photo by Aaron Keeling