The Kodiaks men’s volleyball team wrapped up its most successful season in program history with a fourth-place finish at the team’s first trip to nationals and a silver medal-repeat in the conference championships this year.

Some of the season’s highlights include:

Congratulations to the team and its coaches, family members and dedicated fans. We can’t wait to see you play again in the fall.

The Kodiaks women’s volleyball team had a brilliant end to their season, winning seven of their final 10 games and earning a split with nationally ranked Briercrest in their final matchup. The strong second half of the season moved the Kodiaks into fourth place in the ACAC south division, but they missed playing in the postseason on a technicality, as fifth-place Medicine Hat hosted the championship and earned an automatic berth.

The men’s and women’s Kodiaks basketball teams gave their fans a sensational season, wrapping up the year with conference berths and awards. Congratulations, athletes and coaches! 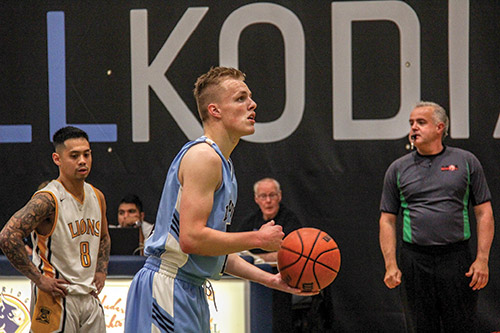 It wasn’t the result the Kodiaks men’s basketball team was hoping for; however, the team rebounded strongly to finish fifth at the ACAC championship tournament in Camrose. An opening round 104-92 loss to NAIT ended the title hopes for the nationally second-ranked Kodiaks. But the team bounced back with a dominant 109-88 win over host Augustana and then a 105-96 win over Red Deer College to finish the season with a stellar 22-2 record. 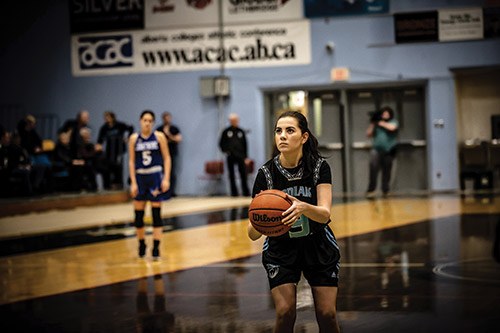 After a strong late season run that earned the team a postseason spot, the Kodiaks women’s basketball team left it all out on the floor at the ACAC championship tournament in Medicine Hat. The Kodiaks nearly pulled off a quarterfinal upset, falling 72-64 to eventual champion Lakeland College. The Kodiaks season then ended with a 57-42 loss to Augustana. The team finished the year with a 12-11 record. 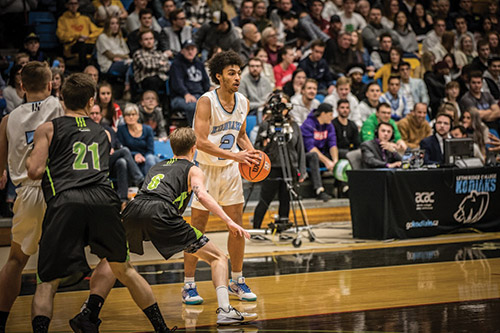 Two great basketball seasons were recognized in a big way in March, as Lethbridge College’s teams combined to earn eight ACAC season-ending awards. Highlighting the list is men’s basketball ACAC player of the year Brock Dewsbery. The Kodiaks also earned both south division rookie of the year awards, as Dewsbery earned the men’s honour and Natalie Hoyt won the women’s award. The Kodiaks also swept south division coach of the year awards, as Deanna Simpson and Ryan Heggie were honoured on the women’s and men’s sides, respectively. The Kodiaks also placed three players on the ACAC all-conference first-teams. Dewsbery and Orin Porter Jr. were honoured on the men’s side, while Kirsten Barwegen was named to the women’s team. Dewsbery and Porter were named ACAC tournament all stars, and Dewsbery was named a CCAA All-Canadian. Congratulations to all of these athletes and coaches.

Unfortunately for our student-athletes, but with the health and safety of everyone in mind, the ACAC cancelled the rest of its athletics seasons in mid-March. This means the Kodiaks didn’t have the chance to participate in either the conference futsal or indoor track championships. The college community proudly acknowledges the hard work of the Kodiaks coaches and student-athletes in preparing for these championships, and we look forward to cheering for them next season. 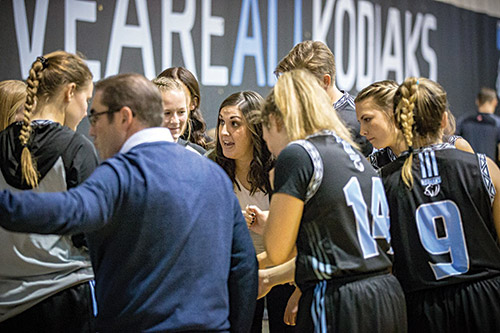 After three seasons at the helm of the Kodiaks women’s basketball program, Deanna Dotts Simpson (General Studies 2015), announced she is stepping down as head coach in March. Simpson and her husband, Brady, are expecting their first child in the coming months, and she says with her family about to grow by one, the time is right to step away.

Todd Caughlin, the manager of Kodiaks Athletics, had nothing but praise for how Simpson navigated many challenges during her tenure. “Deanna came in as a rookie coach with the added challenge of coming off an undefeated and national championship season and had to rebuild essentially the entire program,” says Caughlin. “Coming in as a new head coach is a tough enough challenge but Deanna faced those challenges head-on. The changes she implemented have proven themselves with the recent positive results experienced by the women’s basketball program. I wish her the best of luck with her new family and she will be missed!”

Simpson completed her postsecondary playing career with the Kodiaks from 2013-15, which included helping the team to an ACAC championship and national silver medal in 2014-15. She then spent two seasons as an assistant coach, a span in which the Kodiaks went 50-1 and captured a CCAA national championship in 2017. She was named head coach after that championship season and immediately was tasked with rebuilding a program that lost many graduating players. After enduring a rebuilding season in her first year, Simpson proceeded to guide the Kodiaks to a pair of ACAC playoff appearances. She ended her tenure on a personal high note, being named the 2020 ACAC south division coach of the year. The award capped a magical run that saw her team clinch a conference championships spot during the final weekend of the season, before giving eventual ACAC champion Lakeland a real scare in the quarterfinals.