Two athletes, two builders and two teams are the newest inductees into the Lethbridge College Kodiaks hall of fame.

The 2019 class, the second group to enter the hall, was honoured during a Kodiaks’ basketball and volleyball weekend home stand in November. This year’s inductees include: former instructor and coach Mary Wall and long-time supporters Flora and the late Val Matteotti in the builder category; Lori Hart, who starred for the Kodiaks women’s volleyball team from 1981 to 1984, and Carlos Maffia, a men’s basketball star and Kodiaks coach, in the athletes category; and the 1962-63 women’s basketball team, the first ever fielded by the college, and the 1966/67 men’s basketball team that went 18-1 on its way to a Western Inter-College Conference Championship, in the team category.  Wider Horizons spoke with two of the inductees about their experiences on campus, on the court and around the world. Here’s what they had to say. 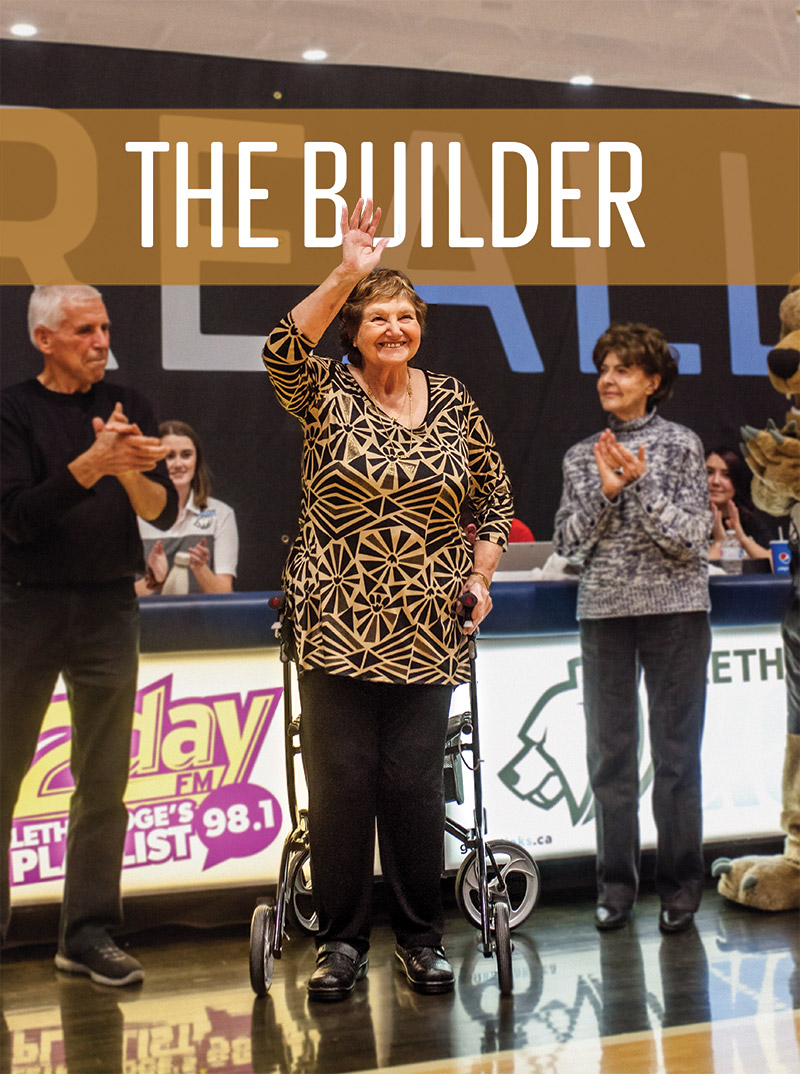 While Mary Wall built many athletics programs at Lethbridge College over the years, her legacy will be the opportunities she created. In addition to building the Kodiaks' women's basketball and volleyball teams, Wall also brought to life a cross-country running team that has since earned national recognition, helped establish fencing and lacrosse programs, and created a marching drill team that remains dear to her heart.

“I loved doing it,” says Wall, hired as the school's first female physical education instructor in 1971. “I liked the challenge. Mom and Dad always told me, if you want to do something, do it well. I follow that thought all the time. I really like starting things, and I really like seeing them progress ... Once it was growing and running, I'd move on to another sport.” First up was the women's basketball team, which Wall launched and coached for a year before handing the reins to Buster Burke and moving on to lead the women's volleyball team. She coached that squad for several years, while also creating the school's first cross-country running team. She worked with George Gemer, Carole Gemer (Business Education, 1963) and Shaun Ward, a former Lethbridge College instructor, to create the Kodiaks' 10/4 Road Race, Lethbridge’s oldest ongoing running event. Wall teamed up with runner and college instructor Ramona Stewart to begin the annual Pumpkin Run for younger runners.

“(Mary) is one of those true, silent builders of Kodiaks' athletics,” says Todd Caughlin, manager of Kodiaks Athletics. “She did so much work behind the scenes to actually push to make sure women's athletics were being represented, and then obviously, take that next step to help coach them, help guide them, help build them. She played an integral role in where Kodiaks' women's athletics are now.”

After growing up in Lethbridge, Wall attended Idaho State University in Pocatello on a working scholarship – full athletic scholarships for women weren't offered at that time – where she played basketball and volleyball and helped coach intramural activities. She returned to southern Alberta in 1971.

“I wanted to come back,” says Wall. “I was away for five years. Mom and Dad were getting older. My sister saw an ad that the college needed a female physical education teacher, and I was lucky enough to be hired.”

Throughout her time in Idaho, Wall had returned home to work in the summers alongside Ben Brooks on a variety of projects. As fate would have it, Brooks was also athletic director at the college. “Ben Brooks was phenomenal,” says Wall. “He was the athletic coordinator, a man of vision. But he had to have somebody do it, and I loved sports... I just wanted to give athletes an opportunity to do activities they wanted to do.”

Wins and losses weren't a concern in the early years. Wall's work was more about building a Kodiaks foundation for the eventual creation of the Alberta Colleges Athletic Conference (ACAC).

“She wasn't afraid to take those initial steps at a time when, to be realistic, not a lot of steps were being taken,” says Caughlin. “For her to be brave enough and have that will and determination to see that happen, you can't say ‘thank you’ enough.”

All the while, Wall managed the college marching drill team. “(The girls) loved it,” says Wall. “We'd have 30 girls trying out, and the girls we had on the team I still have as friends, and they still come and see me. We were the only drill team in Canada.”

Wall's experience continued to pay dividends even after she left the sidelines in 1987. When Alvin Tietz and Knud Petersen prepared to launch the first Kodiaks' women's soccer team seven years later, Wall knew what they faced.

“She was a big cheerleader for us,” Petersen says. “She was on our side. She very much encouraged us to keep the pressure on to get it going.”

A first-year team often plays a season of exhibition games to get established. Wall was adamant that if the soccer squad was good enough, it should make the immediate jump to the ACAC. At the end of its first campaign, the Kodiaks team hoisted the CCAA championship banner.­­­­ Wall’s time at Lethbridge College was also about family. Her husband, Darrell Wall, eventually coached the women's basketball team she created. Her daughter, Shaylene Wall (General Studies 2000), played on the volleyball team her mother helped build and today is an instructor in the General Studies program. Wall’s son, Brad Wall (General Studies 1997- 98), played on the men's basketball team she probably would have created if someone hadn't beat her to it.

“I always say the college hired me, but they got a family with it,” Wall says. “We are a college family.” 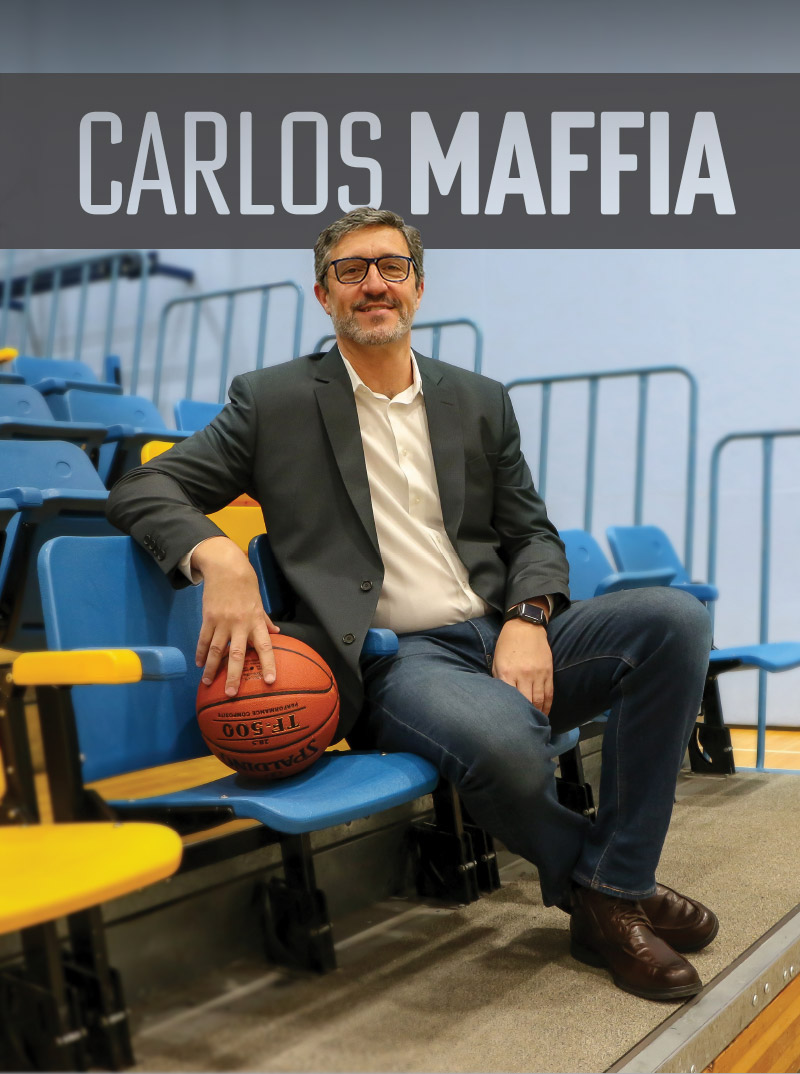 Carlos Maffia didn’t need eight years to make a name for himself at Lethbridge College. The weighty surname he carried from his home in Sao Paulo, Brazil, was an immediate talking point with his Kodiaks basketball teammates in the early 1990s.

“There were jokes from the day I was born,” laughs Maffia. “‘Oh, you’re from the Mafia, how many people you killed?’ I always tell them, listen, if I was from the Mafia, trust me, I would have a lot more money than I do now.”

Maffia wasn’t seeking his fortune when he arrived in southern Alberta — just opportunity. He wanted to leave Brazil, where his young teaching career had stalled, and he wanted to learn English. Eight memorable years later, four as a player and four as head coach, Maffia had earned his induction into the Lethbridge College Kodiaks’ Sports Hall of Fame. “It’s a very happy time, but very emotional as well,” says Maffia, who travelled from Sao Paulo to attend the alumni weekend celebrations in November.

“When I walked into the gym, I thought ‘wow.’ I made so many good friends. We won, and we lost, and we had the support of so many people. You guys are very lucky. I don’t know if you realize, you have the greatest people.”

Maffia arrived in Lethbridge in 1990. He played four seasons for the Kodiaks, leading the team to a pair of ACAC championships while being named all-conference each year. From there, he took the reins as Kodiaks’ coach. “I can’t deny, as a player in terms of titles and wins, I was more successful,” says Maffia. “We won ACAC titles, we went to two national championships. But as a coach, there are more memories. When I graduated, tons of players left. So we started from nothing. We had a tough season, we went only 4-16, so my memories are more about building up something.”

“Everybody knows I am very hot-tempered,” says Maffia. “I was always very excited, I hate to lose, so the first year was tough. Having Tim as a role model, someone I looked up to, he helped a lot. If I didn’t have him as an athletic director, I think I would have failed.”

“As a player, Carlos was pretty intense,” says Tollestrup. “As a coach he was the same way, but I think as time went on, he was able to show a little discipline, not getting too excited.’” From a first-year player to a fourth-year coach, eight years was a lifetime.

“I was a very different person,” says Maffia, who was named ACAC South Division coach of the year in 1997-98, his final season with the Kodiaks. Today, as principal of a high school in Sao Paulo, he has coached the senior varsity girls volleyball team to six consecutive undefeated seasons. He also has a more reflective approach when coaching young athletes today.

“Now we talk a lot about one’s journey,” Maffia says. “Enjoy it to the fullest, do the best that you can, because the worst thing you can do is look back and say ‘what if?’ And it’s funny how teenagers can really get familiar with that. They fully jump on the boat ... they work their hardest. I think I could have done a better job at the college that way. I could have contextualized things more.”

Visits to Lethbridge are rare, but Maffia’s Canadian ties stretch beyond southern Alberta. He met his wife, Wendy, when she played Kodiaks women’s basketball. After 16 years together in Brazil, Wendy and their two sons moved to Victoria in 2015. Their son Diego, a heavily recruited basketball star, set the B.C. high school scoring record with a 96-point game last season. This year he played his rookie season with the University of Victoria Vikes. Younger brother Lucas followed in Diego’s footsteps, playing high school ball at Oak Bay.

The family connects regularly through FaceTime, and Maffia makes one or two visits a year. It gets harder to leave each time.

“It is very difficult,” says Maffia, who streams as many of his sons’ games online as possible. “But, I always keep in mind that what I’m doing now is best for them. They’re up here and they fit in perfectly and they love the system. We always wanted the kids to go through high school in Canada. They would have more opportunities, and we wanted sports to be a big thing in their lives.”

Maffia wants for his sons what he found at Lethbridge College. “I was so lucky to come up here. I can truly, without a shade of doubt say, that the eight years I spent here changed my life.”