It’s a collection shrouded in mystery. Its history is murky. Its journey to its new home is the result of 30 years of hard work and partnership. And any firm answers to fill in the blanks may have disappeared with an old photograph and the passing of one of southern Alberta’s leading soil scientists.

But when it comes to its importance as a learning tool, there is no mystery.

“It’s an enormous benefit to our students,” says Dr. Edith Olson, an instructor in Lethbridge College’s School of Environmental Sciences. “Instead of listening to us talk and maybe showing a pretty picture, we can say ‘Here it is. This is what it looks like.’”

The collection is 110 soil monoliths – vertical cross-sections of soil about one-metre long that show the soil in its natural state. It now resides at Lethbridge College. The monoliths are a donation from Agriculture and Agri-Food Canada, which housed the collection for decades at its Lethbridge Research and Development Centre – known locally as the research centre – until parties on both sides agreed that the college made a natural home.

But why the collection ever came into being is another story completely.

The collection is undoubtedly impressive. It contains soil samples from across Western Canada, stretching as far north as the Yukon. Each one is as unique as a fingerprint, and the effort  that went into creating the collection was enormous.

“A considerable amount of resources, staff, labour, travel and time would have been invested in building this collection,” says Dr. Jim Miller, research scientist for Agriculture and Agri-Food Canada. “Some of these would have been remote locations. You’ve got to travel to the sites, dig a huge soil pit and carefully cut out and excavate a large intact soil monolith.”

The process of mounting the monoliths is also arduous, as each has to be carefully mounted to a backboard while preserving its physical features, a truly meticulous combination of art and science. “It  is a very slow and delicate process to excavate an intact soil monolith and a lot can go wrong and then you might have to start over,” says Miller. “In addition, it is a very laborious and delicate process to fill the soil pores with epoxy resin or glue back in the laboratory to ensure the soil structure remains intact and doesn’t fall apart.

Given how much time was spent building the collection, surprisingly little information exists about why it was collected.

“We know the collection was complete by roughly 1965, so it was probably made in the '50s and early '60s,” says Dr. Francois Eudes, Alberta Director of Research, Development and Technology for Agriculture and Agri-Food Canada. “We tried to reach out to our retirees and question them to see if they had any knowledge about who collected these, but we couldn’t really find out whether it was a group of people or one individual in charge of creating this collection.”

What little research is available leads representatives from Agriculture and Agri-Food Canada to believe federal and provincial soil surveyors likely collected the samples in an effort to better describe soil conditions in Western Canada. But the one man who might have had the knowledge to fill in the blanks passed away in 2011.

“If John was here, he might have known the answers,” says Miller, referring to Dr. Johan Dormaar, one of Western Canada’s leading soil scientists and a long-time presence at the Lethbridge research centre. “But, unfortunately, we might never know.”

“John became kind of the curator,” says Ken Perl, a long-time Lethbridge College environmental sciences instructor. “He was the go-to guy if you wanted to view them or get any information about them.” 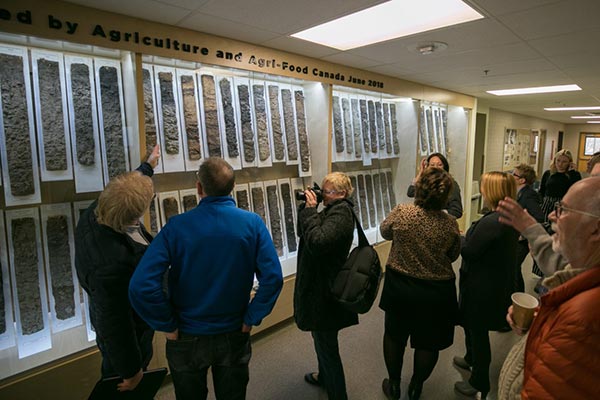 In fact, Perl remembers a photograph that may have been one of the few clues as to who collected the monoliths – and he believes Dr. Dormaar was at least somewhat involved.

“There are two specimens labelled ‘Mud Lake’ and I have seen a photo that shows John and his technologist of the day collecting those on the dry lake bed during a drought,” says Perl. He assumes the photo came from the early 1960s, based on the vehicle that was visible in the photo.

“I’m kind of a car buff,” he laughs. “And it’s an old ’60 Chevy, which shows how bush league things were back then. Today they have four-by- fours but back then they just drove a car out there.”

That attention to detail offers a glimpse as to why Perl became known as the resident monolith collection expert. He first saw the collection while he was a summer student at the research centre and knew its value as an educational tool when he joined the college as an instructor in 1980.

“I would take students over there on field trips in our soil classification and taxonomy class,” says Perl. “It was integral to my course to show the students that soil isn’t just something you dig up and arbitrarily manipulate, it has many different classifications. “If you stretch your imagination, soil really is a living, breathing organism like a coral reef and really just as complex.”

Miller compares the collection of monoliths to a form of taxidermy used by scientists to preserve soils. “A soil monolith collection is analogous to a natural history museum, but instead of preserved animals or plants, you have preserved intact soil monoliths,” he says. “Soils are not classified as species like animal and plants because there is a gradation of soil types in natural landscapes and soils are not discrete units like animals and plant species.” These differences are what make the collection such a valuable learning tool.

“We’ve already said ‘OK, we’re talking about this, let’s go into the hallway and take a look,’” says Olson. “We can speak even more to ‘why is this soil different from that soil? What are the processes that are acting on this one as opposed to that one?’”

“People would say ‘that must get boring,’” says Perl of all the time he’s spent with the monoliths over the years. “But I would say, ‘no, every time I look at those, there’s some other detail, some value-added insight.’

“LET’S GO INTO THE HALLWAY!”

Perl and his students became well-known fixtures at the research centre, dedicating hours to studying the collection. “He probably knows those monoliths better than anyone else,” says Miller.

To Perl, the monoliths’ value are their ability to fill in the blanks where a literal field trip – to a field, where he and his students would dig into the ground – falls short. “We could only do one or two soil types on a field trip,” he says. “But these are fantastic because they represent all of southern Alberta and beyond.”

As new faculty members have joined Lethbridge College, they have shared Perl’s vision of the monoliths as educational instruments, a capability that will only increase now that the collection lives at the college. Displayed on the third floor of the Cousins Building, the monoliths can now be examined right outside of the college’s soils lab.

“DID NOT HAPPEN OVERNIGHT”

Perl and his students were the perfect audience for the monoliths and their frequent trips to the research centre delighted the soil scientists with Agriculture and Agri- Food Canada. “They’re not used for research purposes, they’re essentially for education,” says Eudes. “They show people, in particular students, how soil is formed.”

As students were the main audience, experts on both sides agreed the collection would be best served by being at the college, but making that happen was easier said than done. The monoliths were the property of the research centre, and as such were a Crown asset – meaning any transfer had to be approved by the federal government.

An initial round of discussions about transferring the collection took place in the late 1980s. Those talks planted the seeds that eventually sprouted into the collection’s new home at the college. “It did not happen overnight,” says Olson. “I kept sending emails asking ‘where are we at with the soils collection?’ And I have to give a lot of credit to Jim Miller because he wouldn’t let it die on the vine over there.”

Agriculture and Agri-Food Canada is quick to credit a team effort involving many employees and management who persisted in the approval process. Minister of Agriculture, Lawrence MacAulay, officially approved and signed off on the transfer of the soil monolith collection to Lethbridge College on Jan. 24, 2018.

“All the soil scientists here are pretty happy that it has been transferred to the college because everyone agrees that it will definitely get more use over there,” says Miller. The replacement cost of the collection was appraised by Lethbridge College at over $240,000, making it a significant financial donation from Agriculture and Agri-Food Canada to the college. But those close to it believe its actual value is priceless.

“Transferring the collection allows us to achieve a greater public result than just keeping it for ourselves, where it’s not open to visitors,” says Eudes. “So not only is it of benefit to students, but to other individuals and Canadians who will now have easier access to it. “It’s another example of the strong relationship between the college and Agriculture and Agri-Food Canada.”

“MY OWN LEGACY PROJECT”

While its origins are murky, the future for the monoliths collection is much better defined. Beyond their obvious teaching uses, instructors at the college are already planning on how they can build out the information around the collection. That includes further researching the monoliths and using new digital technologies to build a database that can be used by everyone.

“It’s not just placing pictures of the monoliths online, but also connecting them to maps,” says Monica Batista Benke, an environmental sciences instructor, “where they are found, where the samples were collected, and using digital tools to create something really useful.”

It’s a fresh start for the collection, and a proud moment for Perl, who saw its value early on and has used it to help teach hundreds of students through the years.

“Personally, that is my own legacy project,” says Perl. “After 35 years, it’s great to leave something of value at the college that students can use.” And can now use much more easily, thanks to the combined efforts of those at both Lethbridge College and Agriculture and Agri-Food Canada.