The Lethbridge College men’s volleyball team wrapped up its best season in program history with an ACAC silver medal in February. “I’m so proud of this group of young men, and I’m thankful for the joyful run we had together,” says Greg Gibos, Kodiaks men’s volleyball coach. “They deserved the best experience because they are simply the best people. To everyone who took time to text, tweet and interact with this team – we heard and felt you. The amount of support we’ve received has been the incredibly humbling."

The historic season included a new record for wins (22), the team’s first-ever ranking in the CCAA top three and the first conference medal in program history. “What an incredible ride for this group of student-athletes,” Gibos adds. “I’m so happy that each one of them has been able to chase after their dreams of playing post-secondary volleyball, and had an amazing run into the conference championship. This group of student-athletes is resilient, relentless and has become a family."

"What an incredible ride for this group of student-athletes. I’m so happy that each one of them has been able to chase after their dreams of playing post-secondary volleyball, and had an amazing run into the conference championship.”

The Kodiaks launched their inaugural My Kodiaks Moment giving campaign last fall, raising $10,119.65 to support scholarships for Kodiaks student-athletes. The campaign was boosted by a $5,000 gift from noted philanthropist Flora Matteotti, on behalf of herself and her late husband Val. All admission donations from the inaugural Kodiaks alumni weekend on Nov. 23 and 24 also went directly to the campaign.

Kodiaks student-athletes are strongly encouraged to focus on academics and community involvement, in addition to their athletic pursuits. Kodiaks student-athletes continually post grade point averages equal to, or better than, Lethbridge College’s general student population. Former Kodiaks say their time in the program taught them invaluable life skills such as time management, leadership, working as a team and overcoming adversity.

“When I hired Greg, he displayed a level of enthusiasm to not just coach at the collegiate level but to commit to grow the game of volleyball in southern Alberta,” says Todd Caughlin, Lethbridge College Athletics manager. “He has built a program that has been long overdue at Lethbridge College and with the type of student-athletes he has constructed it with – it’s an incredible accomplishment.”

Women’s basketball bounces back into postseason

The Kodiaks women’s basketball program returned to the ACAC championships in March after a one-season playoff absence. The Kodiaks finished the regular season with a 13-8 record, placing third in the ACAC south division. In her second year at the helm, head coach Deanna Dotts retooled the club and found success with a team that had the third best defence in the south division. “The girls bought into the type of game that we wanted to play and were willing to put in the work,” says Dotts. “We said from early on that defence was where we were going to excel this year, and I believe we did just that.” 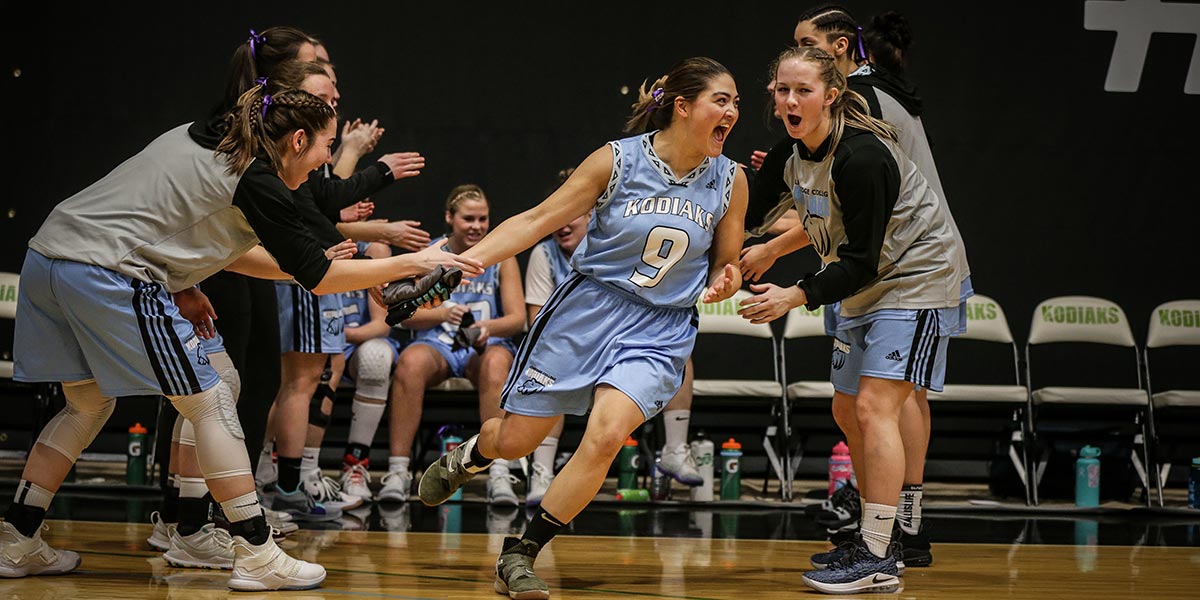 Jocelyn Neilson was named ACAC women’s basketball south division rookie of the year. Neilson was also one of five Kodiaks basketball players named to ACAC all-star teams at the conference awards banquet in February in Fort McMurray. Neilson was named a south division second team all-star, while teammate Juhee Anderson earned first team all-star honours. On the men’s side, Michael Clemons was named a south division first team all-star, while both Lincoln Anderson and Orin Porter Jr. earned second team honours. Clemons finished his ACAC career with his name firmly planted in the conference record book, as the all-time leader in both assists (868) and steals (238).

The Lethbridge College Kodiaks didn’t have to look far for a new indoor track and cross country head coach, as co-coach Simon Schaerz has been promoted to the top job. Schaerz takes over from Bertil Johansson, the winningest coach in Kodiaks history, who retired in November following 32 years at the helm of the Kodiaks.

Schaerz joined the Kodiaks as an assistant coach in 2015 and was promoted to co-coach in 2017. A former Canada West track athlete at both the University of Lethbridge and University of Calgary, Schaerz is also a faculty member at Lethbridge College.

“We have a legacy, and with that comes a pressure that we continue to perform,” says Schaerz. “There is a little apprehension with Bertil leaving, because he’s been such a fantastic mentor. But I’m excited to get in and make the program my own, and live up to the expectation that we perform and not just go to nationals, but finish in the top three.”

A total of 18 teams and more than 300 student-athletes converged in the Val Matteotti Gymnasium in March as the Kodiaks hosted the 2019 ACAC men’s and women’s futsal championships.

One of the most thrilling of the 40 action-packed games was the bronze medal match on Sunday, March 17, when the Kodiaks’ men’s team faced the Olds Broncos. Skilled plays, ferocious comebacks and heated emotion were all on display in a game that couldn’t be contained to 50 minutes, as the Olds College Broncos earned the ACAC bronze medal with an 8-7 overtime victory over the host Kodiaks. The Kodiaks led for most of the game, but the Broncos scored in the last minute of both regulation and overtime to secure the victory.

Danna DeGagne, a first-year student from Calgary studying in the Emergency Medical Technician program, ran her way to a bronze medal in the 300-metre event at the ACAC indoor track championships in March. DeGagne finished the race in 44.96 seconds, less than a tenth of a second behind the silver medalist.

From coach to keeper: Ferguson commits to Kodiaks

Most coaches only dream of returning to the glory of their playing days. For Lethbridge College Kodiaks goalkeeping coach Cody Ferguson, it will soon become a reality. Kodiaks head coach Sean Carey has announced that Ferguson will rejoin the Kodiaks active roster as a goalkeeper in the fall of 2019. Ferguson played for the Kodiaks in 2010-11, and again in 2013. He posted a 6-2-2 record in his final season and was named to the ACAC south division all-star team before transitioning immediately into his role as Kodiaks men’s and women’s goaltending coach.

Ferguson says it was a “perfect storm” of circumstances that led to his decision to return. “Personally, I own my own business right now so I’ve been looking at taking some business classes the last couple of years,” says Ferguson. “After talking to Sean [Carey] and some of the veterans on the team, it was a perfect time for me to take those classes and transition back into playing soccer.” Ferguson is widely considered one of the best keepers in southern Alberta, and Carey sees his signing as a testament to the team’s changing culture. After making the ACAC semifinals last season, the Kodiaks believe Ferguson’s signing will send a signal to potential recruits that the team is serious about making a run at a championship.