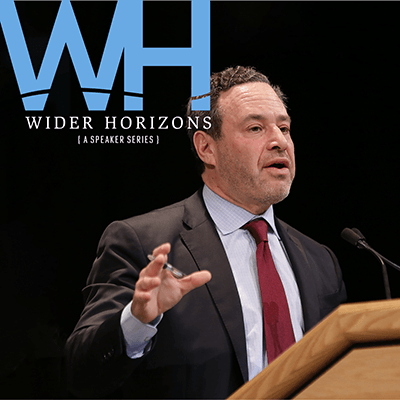 Lethbridge College arrived on the speaker series circuit as Wider Horizons: An evening with… launched in April. Bestselling author David Frum, who served as special assistant and speechwriter to former United States President George W. Bush in 2001 and 2002, spoke at the inaugural event. The series will take place annually and is made possible as part of a $100,000 gift from Bruce McKillop.

Frum spoke on the rise of populism in politics at a ticketed evening event open to the entire southern Alberta community on April 3. He also offered a separate session with students from the Centre for Applied Arts and Sciences earlier that day.

McKillop was the owner and operator of Lethbridge’s McKillop Insurance and Registry Services for more than 45 years. He stressed the value of supporting all post- secondary education in the city and said he wanted to help highlight the educational choices at the college when the series was announced in March.

“The college has so many different types of programming, and I think it’s important to elevate the recognition of those programs, and what the college can provide as a whole,” says McKillop. “The speaker series aligns with that vision and I’m excited to see how it grows and supports academics at the college. I had a good career and Lethbridge supported me. I’m fortunate to be in a position where I’m able to give back, and I think this is a great way to do that.”

The Wider Horizons: An evening with… community speaker series celebrates diverse stories and perspectives, from world-renowned speakers each year. “We’re thankful to Bruce McKillop for stepping forward to make this project a reality,” says Lethbridge College President and CEO Dr. Paula Burns. “He believes in a culture of philanthropy and finding ways to support initiatives he believes in, which is an example to the entire community.”

Check out the fall issue of Wider Horizons for an interview with Frum.

Chris Tomaras, coordinator of the Emergency Medical Technician (Primary Care Paramedic) program, and his students won a Canadian Blood Services Shuttle Up to Save Lives draw in February for having group appointments from October to December. For their commitment to donating blood, they won a $300 gift card to Tim Hortons, which Tomaras put to good use during a multi-casualty scenario that took place in March. 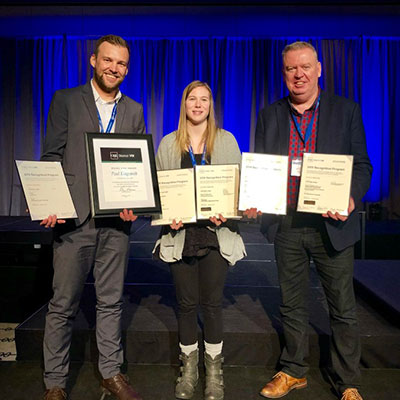 Against the backdrop of the Lethbridge College Crooks School of Transportation shop, partners from the Government of Alberta, as well as the public and private sector, announced the Peaks to Prairies electric vehicle charging network for southern Alberta in February. The network will have 19 fast-charging and Level 2 charging stations from Medicine Hat to the Crowsnest Pass and Waterton Lakes National Park to Morley by the end of this year. The college was a fitting setting as Automotives students are learning how to service electric vehicles and the college is committed to the renewable energy sector.

Culinary Services and the Facilities Department have been recycling materials for several years. In addition to recycling plastics, glass, cardboard and tin, the college composts its kitchen waste and trim. Chef Stephen Klassen, who lives in Coaldale, approached the Town of Coaldale and asked them to donate three green compost bins to Culinary. This collaboration will help to streamline compost collection in the kitchen and help the college to increase composting potential. 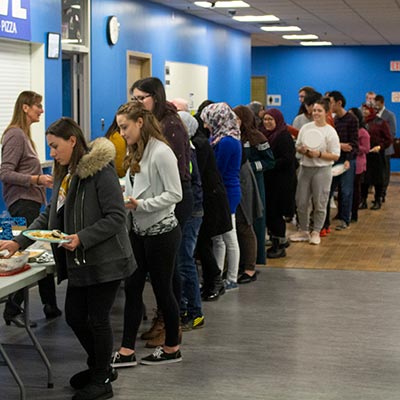 Story and photos by Seth Slomp (Digital Communications and Media 2019)

During a class assignment that involved interviewing international students, Justice Studies student Landon Malinowski noticed something unusual. The person he was interviewing seemed afraid. “She hated cops,” said Malinowski. And after doing some research, he realized that some recent immigrants bring the fear and distrust of law enforcement they may have experienced in the countries they left with them to Canada.

But the police force in Canada is generally recognized as looking out for “the great good of the people,” says Malinowski, and he hoped to reassure her about that. After the interview, Malinowski proposed that the college’s Criminal Justice and ESL students engage with one another over lunch at a meet-and-greet event. That’s just what more than 140 students did in late February in The Cave over pizza and potluck food items from the home countries of many ESL students.

Emil Cipion, a first-year ESL student, grew up in the Dominican Republic where he said police officers would just pull you over for nothing and take your money. Cipion said both international and CJ students benefit from socializing over lunch. “The international students will get a feeling about how the police force in Canada works here,” said Cipion. “But the Criminal Justice students get the chance to learn about different cultures and beliefs.” The Criminal Justice program and the LEO Club plan to continue this event in the coming years and hope to see an increase in attendance.

Indigenous students taking a front-line cook program on campus had their first opportunity to work in the kitchen as the new term started in January. Chef Doug Overes snapped this photo of the first cohort on the night of their first lab. The students are part of a partnership between Lethbridge College Corporate and Continuing Education and Saamis Aboriginal Employment and Training Association. The partnership also sees Indigenous students taking pre-employment carpentry and an administrative professional fast-track program on campus. A similar front-line cook program was offered by Corporate and Continuing Education to students on the Blood Tribe First Nation, but this iteration brings students — including many who live off-reserve — to our campus. All three programs wrap up in April.

LC, LPS team up to provide training to police cadets

Lethbridge College and 11 other journalism schools from across Canada have joined forces to strengthen journalism education, creating a new organization called J-Schools Canada/ÉcolesJ. Acknowledging that journalism faces a range of threats around the world, the agreement allows the partner institutions to share best teaching practices and knowledge to help bolster the quality of journalism education in Canada. Instructors and students in Lethbridge College’s Digital Communications and Media program will gain additional access to resources and opportunities to share ideas.

Multimedia Production and Digital Communications and Media students practised the art of the pitch at February’s Tecconnect Challenge. During an intense five hours, they worked in groups to create marketing materials and a distribution strategy for KJ Concepts. The business, founded by Kenny Joss (Engineering Design and Drafting Technology 2005), is a design and drafting company that uses 3D scanning technology.

Randy Holmberg, Tyson Baldrey and Allan Johnston, all 2018 Engineering Design and Drafting Technology graduates, have been selected for the Association of Science and Engineering Technology Professionals of Alberta Capstone Project of the Year Award. The award recognizes originality, quality and relevance of the research, and real-world applicability. The trio’s project was one of eight selected and featured in ASET’s quarterly magazine, Technology Alberta, in the fall.

From Extreme Makeover: Home Edition to Love It or List It to Property Brothers, home renovation shows are a television staple. This past year, Lethbridge College’s Digital Communications and Media (DCM) students threw on their work boots and hard hats to produce a show of their own. The students were in charge of scripting, filming, editing and producing Flipped Out, a six-episode web series.