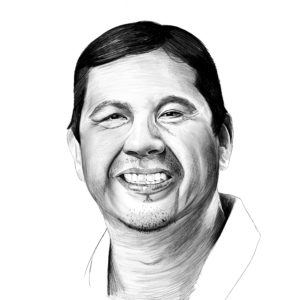 While he was still playing basketball for Kainai High School, coaches at a half dozen colleges tried to recruit Charlton Weasel Head to play for their teams, but the athlete chose to stay closer to home. “While I was here, Lethbridge College gave me the opportunity to be a positive ambassador for athletics and for First Nations students,” Weasel Head said. “My community and the surrounding area could come and see me play, and having their support was huge for me.”
Weasel Head says he could not have done it any other way. “Starting at Lethbridge College gave me the chance to build more values in my life, to have more chances to improve teamwork, to understand who I was, to communicate and show respect. I would recommend any young athlete coming out of high school to go to college first.”

For his work as a role model who continually finds ways to better his community, Weasel Head, who is currently the acting principal at Kainai High School on the Blood Reserve as well as athletic director and coach of the Kainai Warriors basketball team, has received this year’s Lethbridge College Community Leader Award.

During his three years at the college, Weasel Head was well-known for his prowess on the basketball court, including being named a three-time ACAC all-star and earning all-Canadian honours in 1998. He also had an all-star career during two seasons at Brandon University and was inducted into the Lethbridge Sports Hall of Fame in 2008. After earning his diploma, Weasel Head went on to receive his Bachelor’s degree from Brandon University and his Bachelor and Master of Education degrees from the University of Lethbridge.

“Charlton’s success in college and university basketball has inspired many youth from our community to complete their high school studies,” wrote Annette Bruised Head (Renewable Research Management 1998), acting deputy superintendent of the Kainai Board of Education. “In his role of teacher, Charlton’s journey of triumph has been a great source of pride for the Kainai community as a whole.”

Weasel Head’s family has many connections to the college. His wife, Stacey, graduated from the college’s Business Administration program and is currently taking continuing education classes in accounting. Several of their children have been students here, and one more will be starting this fall.

“Family is extremely important to me,” he said. “I love what I do as an educator and supporting students, but time with my family is the priority. My parents attended residential schools, I went to a residential school for two years,” he added, and providing the support to help heal some of the intergenerational effects of residential schools is a priority. “If not for family, there’s no way I or my kids would be able to do what we do. Family supports us as we work to accomplish our goals. They help us stay grounded and humble and continue down that path of education.”

Knud Petersen & Alvin Tietz
{ Founders of Lethbridge College’s women’s soccer program }
In 1994, Knud Petersen and Al Tietz volunteered to establish the college’s first women’s soccer team with help from athletic director Tim Tollestrup. They financed the program themselves the first few years with help from Ron Sakamoto, a friend and multiple Grammy winner. During its first year, the team was undefeated and finished the season as national champions.

Rachel McKenzie
{ Nursing 2017, women’s cross country and indoor track }
In 2017, Rachel McKenzie won gold at every cross country conference race she competed in, including provincials, and she finished her Kodiaks career with 12 provincial and national medals for her two sports. Her coaches call her a true champion and ambassador of Lethbridge College who excels in the classroom as well as on the race course or track.

Tim Tollestrup
{ Long-time athletic director }
Tim Tollestrup developed from local basketball playing legend (including a stint on the national team) to the Kodiaks men’s basketball coach to Director of Athletics. During his 20 years in that role, he turned the Kodiaks program into one of the ACAC’s best, winning CCAA national championships in basketball, soccer and cross country running.

Grady Taylor
{ Criminal Justice student, men’s basketball }
During the 2014-15 season, Grady Taylor made his way onto the Kodiaks’ roster, his first full campaign as a student athlete, and he did not disappoint. During the playoff run to the ACAC championship and the CCAA bronze medal, he was instrumental to the team’s success. He is a consistent shooter and the ACAC profiled him this spring, calling him the “Daddy of Dunk.”

Pierce Van Gaalen
{ Engineering student, men’s basketball }
Pierce Van Gaalen walked onto the men’s basketball team in the fall of 2013 and was a key part of talented teams that earned an ACAC bronze in 2014 and gold in 2015, as well as the CCAA bronze that same season. Van Gaalen’s coaches say he is a versatile athlete who can play multiple positions, is a great defender, and plays a consistent style that coaches look for.