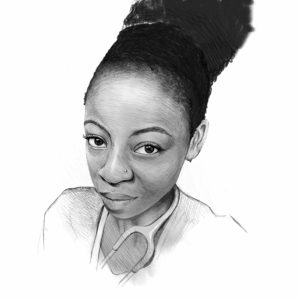 When Mary Majoni got a summer job in 2015 working at a large correctional facility, she initially wondered what in the world she had said yes to, and she didn’t think she could do the job.

“I never thought about how nurses must be there to provide care in correctional facilities, and I quickly learned
a jail is really a jail,” says Majoni, who came to the college from Toronto for the nursing program. “At first I thought, how could someone do something like this and expect someone else to be nice to them? But in the first few weeks, I would tell myself, I said ‘Mary, you provide health care services. That’s all you do. You are not there to judge a person.’ Once you get to a point where you know how to separate your job and not be judgmental, you don’t have any issues providing care.”

Majoni returned to work full time at the correctional facility after graduation, and she has been loving the challenge and satisfaction of the work ever since.

“The best part of my work is just being able to help patients out,” she says. “At times you might get a patient
who might be going through some stuff. I can listen, tell them it’s OK, let them know if they need someone to talk to, we can call someone to talk to. If there is anything I can do in my power – if there are people who are wanting to kill themselves – and I can get to a person first, I go home feeling like I totally saved a life today.”

Her day-to-day work involves distributing medications and working in the infirmary, dealing with patients who are injured or ill, and also those dealing with pregnancy, mental health issues, addiction or overdose.

facMajoni adds that the NESA program, which involves students taking their first two years at Lethbridge College and their second two years at the University of Lethbridge, provided a great foundation for her career.

“When I started, it was so difficult and I wanted to drop out,” she says. “Everyone says nursing is so tough, and it is. But really, once you start, the support you get from the different instructors and the people you meet is really amazing.”

Jessica Walker
{ Early Childhood Education 2012 }
Jessica Walker received a provincial award for her passionate and dedicated approach to the care and development of children in December. She was one of three individuals from a field of 31 to receive the award. Walker operates a day home in Cochrane and received the Child Development Professional Award of Excellence. “Seeing a child accomplish a goal they were working so hard to achieve brings me so much joy, the child’s face lights up and their excitement and enthusiasm is contagious, I cannot get enough of that feeling,” she said in an article in the Cochrane Eagle.

Zach Palmarin
{ Business Administration 2012 }
Zach Palmarin opened Tranquility Float Centre, Lethbridge’s first flotation therapy business, in March. He created the centre with a vision to bring more peace and balance to others, and to aid people in their journey to be stronger and happier. “Floating is a very simple yet powerful practice for healing the mind, body and spirit,” he says. “The float tanks are filled with 1,100 pounds of Epsom salt, and the water is heated to skin temperature. The tanks are sound-proof and light-proof, making for little-to-no external sensory input. This unique environment allows for deep relaxation and can have tremendous benefits,” including stress and pain relief, improved athletic performance and more.

Jennifer Cearns
{ Cook Apprenticeship 2016)
The Alberta Apprenticeship and Industry Training Board named Jennifer Cearns the 2016 Top Cooks Apprentice. “In addition to working full-time and taking care of her young family, Jennifer was a student in the Weekly Apprentice Training for Cooks program at the college,” says her instructor, Chef Rob Sonnenberg. “Jennifer was extremely hard-working. She would come to the college two hours before her class started to study (often encouraging others in the course to join her). She was driven to understand the science behind cooking and always wanted to know all the answers.” Cearns works for the Good Samaritans Society at Linden View in Taber.

Emily Ritchie
{ Agriculture Technology – Animal Science 2015 }
Emily Ritchie won the inaugural Young Speakers for Agriculture Contest at the 2016 Calgary Stampede and was asked to speak at the Royal Winter Fair in November in Toronto about the successes and struggles facing those in the agriculture industry. “I spoke on what the next generation of farmers and ranchers brings to the table in agriculture,” she said in an article in Western Wheel. “I spoke about the enthusiasm and the passion that I see in young producers right now – just seeing the different challenges we are up against.” Ritchie works for the Canadian Cattlemen’s Association as the youth leadership co-ordinator in Calgary.