Since graduating from Lethbridge College nearly 20 years ago, Dr. Chad Nilson’s academic road has taken him from 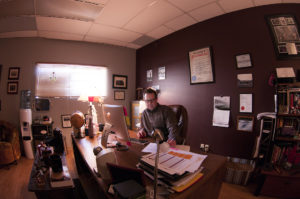 his native Saskatchewan, through the United States, Europe and South America, and back again.

Most recently, it brought the renowned expert on community safety back to Lethbridge College as the head of a collaborative research project evaluating Medicine Hat’s Safe Families Intervention Team domestic violence program.
“I still remember exactly how I felt while walking those hallways as a 17-year-old,” says Nilson. “Coming back and seeing some of the same staff and instructors shows stability and a sense of community ownership.”

After finishing high school in Prince Albert, Sask., Nilson entered Lethbridge College’s policing program.
“I didn’t know if being a police officer was really my track,” he recalls. “I was more interested in what I could contribute to the broader understanding of public safety.”

“As a student Chad was very inquisitive and liked to think outside the box, challenge the status quo and really ask a lot of questions,” says Barbara Mantello, one of Nilson’s instructors at the time and current Chair of the Lethbridge College School of Justice Studies. “You could see from the path he’s been on in post-secondary education and beyond that he is still committed to that.”

After graduating from the program in 1999, Nilson’s studies took him to university in the United States, from Great Falls in Montana, and on to a Master’s degree program at Radford University in Virginia, which in
turn led to a stint studying Venezuela’s justice system.

“It was at that point that I started to have a better understanding of the connection between research methodology and actual practice,” says Nilson. “I understood the role of science in ensuring the government’s response to crime and public safety actually met the needs of clients.”

This prompted him to change academic gears and pursue both a Masters and PhD in Political Science at the University of New Orleans in Louisiana.

“[The switch] allowed me to develop some tools and expertise focusing on the public policy side,” explains Nilson. “If you look at the criminal justice system, it is the government’s response to when families break down, when behaviour breaks down. So, my political science training allows me to think a bit broader and understand where we can actually make a difference, where we’re wasting our time, all the while making sure that evidence and science and good measurements guide policy, not just morality, not just tradition and not just institutional legacy.”
Since then, Nilson has consulted with

post-secondary institutions, government, Indigenous communities and social service agencies to produce over 100 evaluation reports and several peer-reviewed and industry-based publications. Today, he is a Community Engaged Scholar at the University of Saskatchewan, and Vice President of Research and Evaluation at Global Network for Community Safety. While his work has made Nilson an in-demand scholar and researcher, it was a personal connection that brought him back to the familiar surroundings of Lethbridge College.

Medicine Hat’s Safe Families Intervention Team (SFIT) was formed in 2014 by the city’s police service and the Medicine Hat Women’s Shelter Society to improve the community’s response to domestic violence.
“We’d been talking about how we could work collaboratively in creating safer families in our community through early intervention, before it reaches the threshold of criminal charges or a violence level that creates safety concerns,” says Medicine Hat Police Chief Andy McGrogan.

“There was a link missing between what we do at the shelter and the calls being responded to by the police,” says Rose O’Donnell, Director of Program and Services for the Women’s Shelter Society.

The SFIT team includes a full-time Medicine Hat Police constable and two women’s shelter society outreach workers to provide support, safety planning and information on services to victims of domestic violence. O’Donnell says the more proactive approach to handling cases is reflected in the numbers: between April 2013 and March 31, 2014, the society saw 60 cases. Between April 2015 and March 2016, that number had grown to 575.

“As (the program) developed, we discussed how we could measure our successes,” recalls Chief McGrogan. “That’s why [in 2015] we asked the college if they were interested in doing a review of the program to see what our outcomes might be.”

“We proposed a research project to assess the program and make recommendations,” said Gina Funicelli, who was Lethbridge College’s Dean of Applied Research and Innovation during this project. “It was an opportunity to provide the evidence our community partners needed to sustain the program while also building our own research capacity to develop similar projects in future. ”

When it came time to find the right person to run the project, Barb Mantello, chair of the School of Justice Studies, knew just who to ask.

“[Chad] has had quite a journey and we maintained contact through it all,” she says. “When this opportunity came up I thought maybe he would know of someone who could do the research and when we approached him, he said he would actually be interested.”

Nilson teamed up with David Maze, an instructor in the School of Justice Studies and a former police officer, to look at existing data including police reports, case and SFIT client files, as well as gathering information from current and former clients and staff through surveys and in-person interviews. After the project, the team prepared a report highlighting the strengths of the SFIT program and included several recommendations to support improvements, such as increasing efforts at early intervention.

“The most important takeaway [from the review] is that it demonstrates that police can work effectively with other services to help people before they are in crisis,” says Dr. Nilson. “SFIT has demonstrated that police and women’s shelters can do things differently instead of following the status quo and when they do that they are more effective.”

“We knew from our numbers and outcomes that this was working, but we hadn’t set up a system to validate [our approach] with our clients,” says Rose O’Donnell of the women’s shelter society. “This evaluation showed us that we are on the right track.”

In addition to validating the SFIT program’s approach and recommending improvements, the evaluation will also contribute to the long-term sustainability of the program itself.

“It’s imperative we’re able to demonstrate the value of this program through measured results,” says Medicine Hat Police Chief McGrogan. “Times are tight and dedicating resources to programs can be difficult in our current financial structure. This evidence-based research really gives us the credibility we need to push to continue the program.”

While working on the evaluation project, Dr. Nilson took the time to provide workshops on community-engaged research and evaluation to Lethbridge College faculty, which highlights a broader shift in how police and other public safety agencies use information to guide their decision making.

“I can frankly say that in 27 years as a police officer, the idea of applied research or having academics enter the policing world to try to advise police was never on my mind,” says Maze. “Now, after having done my own university studies and having had this experience working with Chad, evidence-based policing and applied research are critical to the success of public safety initiatives in the future.”

The shift has also changed the way institutions like Lethbridge College deliver programs to prepare students for the new reality of the field.

“We have a Bachelor of Applied Arts in Justice Studies degree and have added a course so our third-year degree students will learn about program evaluation and then can apply some of that knowledge in their fourth year,” says Mantello. “The faculty here are unique as they are all practitioners who have come out of the industry. The majority have their Master’s (degrees), but they don’t have the research experience so we’re looking to build capacity internally to help conduct this kind of research.”

For Nilson, coming back to the college was about more than just helping advance the field in which he has forged his career.

“I wanted to give back to the college,” says Nilson. “It was really exciting and it is an honour to be asked to come back with the knowledge I’ve acquired over the years. That meant a lot and I hope I’ve made the college proud and contributed something to the students and faculty. Lethbridge College gave me my start and I’m very proud of that.”

Albertans affected by family violence can get help through the government and community organizations located across the province. More information can be found at humanservices.alberta.ca or by calling one of the numbers listed below.

If you are in immediate danger, please call 911.

Emergency shelters and housing
Call the Alberta Council of Women’s Shelters toll-free at 1?877?934?6634.

Financial support for Albertans fleeing abuse
Funding is available to help people get to safety, set up a new household or start a new life. For more information, call the 24-hour contact centre toll-free at 1?866?644?5135 or go to albertasupports.ca.

Family violence and your tenancy
If you have signed a tenancy agreement with a landlord and are facing family violence, there are steps that you can take to end your tenancy with no financial penalty. Call 1?877?644?9992 toll-free for more information.

Family Violence Info Line
Talk to trained staff over the phone toll-free 24 hours a day, seven days a week in more than 170 languages by calling 403-310-1818.