After years of designing and tinkering, the opening of a new building is reason to lift a 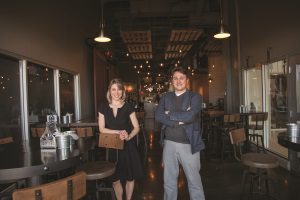 glass for architects and designers. That drink tastes a little smoother though when served inside a brewery you designed.

“I started by researching the brewing process and how beer is made,” says David Cocks (Engineering Design and Drafting Technology 2001), the lead architect on the design of Lethbridge’s Coulee Brew Company brewery, lounge and restaurant. “The design really was meant to follow the process of how the beer is brewed, served and eventually canned and bottled.”

“We thought, ‘what do we want unique for southern Alberta?’” says Yauck. “‘What kind of materials are indigenous to this space? What do we have around us? What kind of wheat, barley, what do the farmers bring to the table?’”

The end result is a rustic, raw look. “The reclaimed wood came from barns from just south of Pincher Creek,” says Yauck. “Same with the metals in the middle of the restaurant and up near the bar,” adds Cocks. “Those were all taken off old barns and things in the area.”

FWBA Architects has been a proudly-Lethbridge company for 88 years, making it the oldest architecture practice in western Canada. Cocks and Yauck have each spent more than a decade with the firm, and both say Lethbridge College gave them a unique set of skills which allowed them to excel early in their careers.

“I found that the college program offered really great technical skills,” says Yauck. “So I was a very strong draftsman.”

“A college practicum was actually how I started with the office,” says Cocks, who went on to finish a master’s degree at Dalhousie University. “The great thing about the college, contrasting it to university, is we didn’t get nearly the same sort of hands-on experience at university.”

More than two years after design began, the pair are now taking a look around the finished building. Part-industrial brewery, part-comfortable lounge and restaurant, Coulee Brew Company was a unique challenge. Admittedly different than most of their projects, it allowed them the flexibility to brew up new and exciting designs. “The client brought a lot of ideas to the table, so it just sparked a bunch of creativity on all our parts,” says Yauck.

“Everything was supposed to be real and hands-on, sort of a brutalist feel to it, where it was just raw materials,” adds Cocks. “So, that was exciting and you can see it everywhere.”