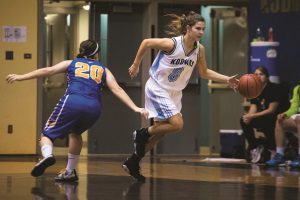 The Lethbridge College Kodiaks women’s basketball team finished its season with a bang, cruising to a 91-61 win over Lakeland College in the ACAC provincial bronze medal game in March in Vermilion. It was a redemption effort for the Kodiaks, who saw their undefeated season and shot at a trip to the national championships come to an end with a 72-69 loss to NAIT in an ACAC semi-final one night earlier. Logan Moncks had a tremendous game for the Kodiaks in the bronze medal match, scoring 25 points. Four other Kodiaks, Emma Lowry (15), Jackie Tollestrup (15), Sunder West (14) and Leah Ekubazgi (11), also scored in the double digits. The game was a match-up many had anticipated taking place with the gold medal on the line; however, Lakeland, which was also undefeated coming into the tournament, was upset by St. Mary’s in the semi-final. The win brought to an end the Kodiaks season with a stellar 23-1 record. Three members of the Kodiaks women’s basketball were recognized as ACAC south division all-stars at the end of the season. Emma Lowry, who tied for third in ACAC scoring with 17.1 points per game, and Sunder West, who led the division with 5.6 rebounds per game, were named first team all-stars. Logan Moncks, who tied Lowry for the team lead in points per game, was named to the second team.

The Kodiaks men’s basketball team took part in provincial action in Olds in March. A 95-79 quarterfinal loss to the top-ranked team from the north division, the Keyano Huskies, ended the Kodiaks medal hopes. In the consolation bracket, the Kodiaks faced the Grande Prairie Regional College Wolves but lost a heartbreaker, 91-90, to end their season. The Kodiaks said goodbye to two players who have completed their college athletic careers this season. Travis Butt, a former ACAC all-star, played five full seasons with the Kodiaks. Chaz Johnson finishes his five years of postsecondary eligibility. He played the last three seasons with the Kodiaks. Both helped the Kodiaks win an ACAC championship in 2015. Johnson was also named to the ACAC south division all-stars first team after finishing fourth in points per game (20.1) and second in both assists and steals per game in the south division this season.

The Lethbridge College indoor track team mined a dozen medals, while both the men’s and women’s teams placed second in the team standings at the ACAC indoor track championships in Calgary in February. The women’s team finished second in the overall ACAC standings with 57 points, behind only MacEwan University, which won the championship with 89 points. Individually, the Kodiaks were led by Rachel McKenzie, who won three bronze medals in the 1000m, 1500m and 3000m and was also part of the silver medal 4x400m relay team. Veteran Caylee Vogel also had a strong meet, earning a pair of bronze medals in the 300m and 600m while also running as part of the silver-medal relay team. On the men’s side, the Kodiaks earned a team silver medal with 63 points, behind the ACAC champions from Concordia, which had 82 points. Lethbridge won three individual silver medals, from Evan Brown (600m), Moses Chesseret (1000m) and Boaz Korir (1500m). Andrew Harding earned two bronze medals in the 1500m and 3000m, while the 4x400m relay team earned a silver medal.

In his fifth season leading the Lethbridge College men’s basketball team, Ryan Heggie has been named ACAC south division coach of the year. He was announced as the winner at the ACAC awards dinner in March in Olds. Last season, the Raymond native coached the Kodiaks to an ACAC championship. However, he lost many key members of that team over the off-season, and it was expected the Kodiaks may struggle to once again be an ACAC contender. Instead, Lethbridge College won 15 games, lost only six and tied for the second-best record in the south division. “It’s hard to find a coach who puts in the time and effort that Ryan does,” says Todd Caughlin, Manager of Kodiaks Athletics. “He is truly committed to get the most out of his student athletes day in and day out and to do it in the right way. Earning this recognition from his fellow division coaches supports that. Ryan has committed to the goals of the department and truly exemplifies what every athletics manager wants in a coach. He is there for his student athletes and the department.” Heggie is a former Kodiaks player and garnered all-Canadian recognition in 1984-85 as Lethbridge was ranked as high as second nationally. He then played at the University of Lethbridge and was part of the Pronghorns Canada West championship team in 1985-86, before playing professional basketball in Europe. Heggie became Kodiaks head coach in August 2011.