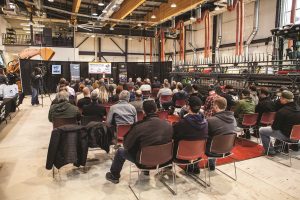 Lethbridge College is the first postsecondary institute in Canada to sign an AGCO Advantage Partnership agreement with AGCO Corporation and Hanlon Ag Centre Ltd. The multi-faceted, non-exclusive partnership was signed in January and announced in March. AGCO is a global leader in the design, manufacturing and distribution of agricultural equipment. The AGCO Advantage was developed in the United States and is currently implemented at eight different colleges in the U.S. and, as of this year, at Lethbridge College in Canada. The partnership includes support of the program by AGCO Corporation providing components used as training aids at no cost to the college’s Ag and Heavy Equipment apprenticeship and certificate programs. AGCO will also provide factory training for the instructors and training materials associated with current AGCO products, giving students the opportunity to learn about the state-of-the-art technologies used on AGCO equipment. The partnership was first suggested by Lethbridge-based Hanlon Ag Centre Ltd., an AGCO dealer and longtime partner of Lethbridge College. The partnership highlights the strength of Lethbridge College’s apprenticeship and training programs as well as its agricultural programming. AGCO’s commitment now allows the college to offer all four years of Ag Equipment apprenticeship training in a cost effective manner. The partnership highlights the flexibility now available in the brand new trades facility, which houses the Crooks School of Transportation.

A very special gift was announced at the Board of Governors holiday reception – $75,000 to establish a classroom in the new trades and technologies facility in honour of board chair Randy Jespersen (Business Administration 1973). The gift, which will be used to create the Randy Jespersen Classroom, was made by Jespersen’s brother, Kent Jespersen, to recognize his brother’s pursuit of excellence and leadership as board chair. The Randy Jespersen Classroom will be located in the second phase of the new trades and technologies facility, which is currently under construction and will open in 2017. Jespersen, who has served as chair of the board of governors since 2010, is the retired president and CEO of Terasen Inc. (now FortisBC).

DMT Mechanical Ltd. is helping build the futures of students with a $50,000 gift to establish a classroom in Lethbridge College’s new trades and technologies facility. DMT is a prime mechanical contractor, co-owned by Neil Nunweiler, Don Romaniuk and Lethbridge College graduate Darren Guenther (Civil Engineering 2000). In addition, DMT took a leading role in developing, promoting and delivering Lethbridge College’s brand new Plumbing Apprenticeship program, which welcomed its first students in January 2016. Students will begin learning in the DMT Mechanical Ltd. Trades and Technologies Classroom in September 2017 when the second phase of the new trades and technology facility opens its doors.

The fall issue of Wider Horizons will focus on some of the fabulous faculty and stellar staff members who have been a part of the college community over the years. Alumni and friends of the college are asked to contact us for help on two stories. First, there will be a story about “The Class that Changed My Life,” so if you had a class that fits that description, please contact us. Second, we are also looking to write profiles of some of the great faculty and staff members who are or were among the most influential or memorable during your time as a student. We’re looking for those who really defined a program or department, who went the extra mile for their students, who were leaders in their professions or who simply made your college experience great. If you have a suggestion for either story, please contact Lisa Kozleski by email at lisa.kozleski@lethbridgecollege.ca, by calling 403.320.3202 ext. 5778, or by writing Lisa Kozleski, Communications, 3000 College Drive S., Lethbridge, AB T1K 1L6. Thanks.

Lethbridge College President and CEO Dr. Paula Burns took the city’s Member of Parliament, Rachael Harder, on a tour of campus on Jan. 13. The tour started in the Cousins Science Centre, moved on to the Aquaculture Centre of Excellence, made its way to the new automotives classrooms in the recently-opened first phase of the new trades and technologies facility, and concluded with a delicious lunch prepared by students in the Garden Court Restaurant. Along the way, Harder met with college faculty, staff and students and learned about the college’s work in agriculture, applied research, aquaponics and trades, as well as the college’s $2.173 million Community College Innovation Program Grant from the Natural Resources and Engineering Research Council in support of aquaponics research.

Lethbridge College hosted the 17th annual Tiffin Conference on Jan. 21 at the Lethbridge Lodge. The event was sold out once again, drawing more than 350 agricultural producers, business people, students and industry experts for a day of information sessions and guest speakers. This year the conference focused on the role of red meat in the agriculture industry. The featured speaker was noted futurist Bob Treadway, who has spent nearly three decades analyzing trends in hundreds of industries to forecast how future environments will affect those in the field. Lethbridge College students benefited directly from the conference as students in Agriculture Sciences and the Blood Tribe Agricultural Training Initiative were in attendance. Many students helped with pre-conference preparations and some introduced speakers.

Some of the top agricultural minds from western Canada and the United States gathered at Lethbridge College in February to grow their knowledge of the canola industry. Organized by the Canola Council of Canada, canoLAB 2016 includes two days of hands-on, interactive diagnostic workshops featuring live plants and insects. Approximately 120 people, separated into groups of 20, took part in eight sessions focused on everything from soil testing to canola grading to insect identification. This is the first time this major conference has ever been held on the Lethbridge College campus. While it is not a college-organized event, agriculture students benefitted from the experience, including being treated to a smaller version of the seminar.

Lethbridge College’s agricultural programming and collaborative industry partnerships were hot topics at December’s Association of Canadian Custom Harvesters Inc. convention in Lethbridge. More than 150 people from across North America attended the two-day convention at the Coast Hotel and Conference Centre, where representatives from the college had the opportunity to speak about Lethbridge College’s 50 years of providing agricultural education in southern Alberta, as well as to celebrate the recent gift of $100,000 from Taylor Harvesting Ltd., a family owned and operated farming and custom harvesting business.

Taking a page from the Dragons’ Den playbook, Lethbridge College students got competitive in a unique challenge in making deadline-driven creative pitches. The college and tecconnect teamed up to provide students from both the Multimedia Production program and the Digital Communications and Media program with a two-day experience. Students traveled to tecconnect where groups of four to five students had five hours to create a “brand package and a communication strategy package” for Lethbridge College graduate Obed Maurice’s (Business Administration 2002) company – including items such as a new logo, a website mockup and an advertising plan. Students pitched their ideas with a winner being named at the end.

The Canadian Home Builders’ Association Lethbridge Region (CHBA) announced to its members the builder for the College Home Project at the yearly Bridge Builder Banquet. The fourth year of this unique partnership sees Empire Homes, a local custom home builder, proudly stepping up to lead the project for 2016. In early 2013, CHBA and Lethbridge College announced the beginning of the College Home Project where CHBA builder members partner with trades and suppliers to build 10 homes over five years with the proceeds from sales donated to the Trades and Technologies facility at Lethbridge College.

A Lethbridge College faculty member has had a paper that he co-authored published by the Canadian Bureau for International Education. Scott Lehbauer, chair of both the English Language Centre and the School of Developmental Education, released a new brief reviewing the current status of international education leadership and gaps identified in this area of the international education sector. The published study also made Academica’s prestigious daily list of the ten most relevant, interesting and important stories affecting university and college professionals.

This year’s Lethbridge College winner of the National Institute for Staff and Organizational Development (NISOD) Excellence Awards, which recognizes men and women who have demonstrated an outstanding commitment and contribution to their students and colleagues, is Dave McMurray. McMurray, who was working as a research officer in the Centre for Applied Research and Innovation when he was nominated for the award, is noted for being a positive, enthusiastic and energetic conduit for applied research at the college. He has helped instructors acquire grants for funding, connecting the dots that can sometimes be missed in the process, facilitated communication between researchers and partners and ensured proposal requirements to maximize potential funding success. McMurray’s dedication to the success of those around him, infectious good nature and natural joy for learning are vital components that enhance the success and enthusiasm of everyone with whom he engages.

Congratulations to the marketing and communications staff involved with the publication of Wider Horizons. The magazine was named a finalist for two Alberta Magazine Publishers Association awards. The Motion Issue (Fall 2015) was nominated for Editorial Package, led by editor-in-chief Carmen Toth, editor Lisa Kozleski and designer Dana Woodward. As well, Gregory Thiessen earned a nomination in photography for his submission, Alberta: Strong and Free, in the Spring 2015 issue.

Congratulations to Melanie Hamilton, NESA Instructor, on her nomination for the CARNA (College and Association of Registered Nurses of Alberta) Award for Nursing Excellence (Excellence in Education). Although Hamilton was not the recipient of the award, she was one among nine other nominees for this provincial nursing education award.

Lethbridge College’s Citizen Society Research Lab has contributed data to a paper on advance care planning, published by researchers from the University of Calgary, University of Alberta, Queen’s University and The Health Quality Council of Alberta. The poll was a follow-up to a similar study which took place in 2013, and is the second of a three-step research process which will be completed in 2017. The CSRL conducts research for its own purposes (students and faculty coursework), as well as for a number of community organizations, public sector service providers and commercial partners.

Biker Buddies for General Studies and Exercise Science held a scholarship fundraiser in Centre Core on Jan. 29. Approximately 50 participants cycled for five hours and covered more than 150 km. Cyclists came from both the college and Lethbridge communities and ranged from 10 years old to 65+ years old. Thanks to all of your pledges, we raised $6,645.05 (plus two Jamaican dollars). A very special “thank you” goes out to the Lethbridge College Students’ Association, the cyclists, pledgers and supporters who made this an exciting, energetic and educational event. And thank you to the call centre for your patience in allowing us to stay musically “pumped” throughout the event.

Fort Macleod’s Cody Gray, 34, was named the winner of the college’s Extreme Career Makeover 2 contest in March. Gray receives two years of tuition and books at Lethbridge College, as well as accommodations in residence for both years. A hard-working father, husband and community volunteer, Gray has spent nearly 16 years in the same profession, but he wanted to expand his education and train for a new career. He intends to apply for the Engineering Design and Drafting Technology program. Gray was one of six finalists in the contest that drew more than 360 applicants. The top six shared their stories via video, while friends, family and the public voted for their favourites. A panel of Lethbridge College judges then selected the winner from the top two vote-getters. Jaimie Griffiths, 40, from Camrose, Alta. was named runner-up in the contest and receives two years of tuition at Lethbridge College. The other members of the final six – Chris Carleton of Lethbridge, Rianna Randall of Osler, Sask., Stephanie Savage of Lethbridge, and Mandy Tobler of Fort Macleod – were given $1,000 student awards.