It was the late 1950s in Lethbridge, and Carole Gemer’s (Business Education 1963) good friend was trying out for 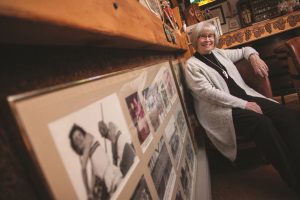 track for a new track team. Gemer decided to go along.

“I had asthma, so I always had a hard time running,” says Gemer, who was in high school at the time. “So they said, ‘okay, can you throw?’ So I tried – and I could. I loved throwing. I concentrated on shot and had some potential there, and had even more potential in javelin.”

In a way, it was also responsible for her very brief basketball career with the first women’s basketball team at Lethbridge College. The women’s team – then called the Koalas – was coached by Dr. Gary Bowie. “I was training and competing in track but wanted to be part of something at the college,” Gemer remembers. “And Dr. Bowie gave me the opportunity to do that, even though I was not a basketball star.” Gemer had never played basketball before. “And I remember thinking ‘I am not a runner, I am a thrower’ but I could outrun the girls on the team. I don’t think I ever made a basket though,” she adds with a laugh.

What was then called Lethbridge Junior College had opened up its first building on the current campus, the Kate Andrews building, the fall Gemer started school. “At that time, we had to wear skirts to school,” she recalls, “and when it got cold, they found out the heat in the building didn’t work. So we had to have special permission from Dean Cousins to wear pants until they fixed it. And as soon as the heat was back on, we had to go back to skirts.”

The year Gemer graduated, she also received the Alberta Track and Field Association’s Outstanding Athlete Award. After college, Gemer worked as a bookkeeper while training, until a torn ligament in her knee cut her Olympic dreams short. She would get to the Montreal, Barcelona and Sydney Olympics in a different way – working as the chief of information and protest and later as the assistant manager of Canada’s track and field team.

Her behind-the-scenes work as a builder can be witnessed in two other Lethbridge athletic institutions: she was involved in the founding of both West Wind Gymnastics and what is now Lethbridge College’s 10/4 Mile Road Race. Gemer was inducted into the Lethbridge Sports Hall of Fame as an athlete in 1988.

“Carole was on the team that went on to win the Alberta Junior Women’s Basketball Championship,” says Bowie. “It was a special group, and Carole was an integral part of it. She gave what was needed at the right times, and I could depend on her to get out there and do what we needed her to do on the floor. She has a very good philosophy and feel for what sport is all about. She was a great athlete, and is a great lady.”