Quinn is a classic newshound, who sniffs out and chases stories that engage, inspire and sometimes enrage 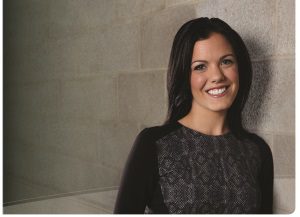 In 2009, Lethbridge College awarded Quinn Ohler the Troy Reeb Distinguished Alumni Internship. This priceless experience allowed the farm girl from Stavely, Alta., to expand her horizons and report on major events in Toronto and Ottawa. She says she also received valuable mentorship. “I met some of my news heroes, people who I had watched for years and wanted to be like,” she says.

Now, as anchor for Global Edmonton’s News Hour Final, she says she’s honoured to tell people’s stories and share information that’s important to her audience. “Being able to move to a large market, and eventually take on a role with a lot of responsibility is something that I’ve worked towards for a long time,” Ohler adds.

Reflecting on her time at Lethbridge College, Ohler says she chose the program for its reputation, proximity to home, and the potential for employment in the industry while still attending school. She says the hands-on experiences were the best learning tools. “You learn by doing, and that prepared me to be in a newsroom,” she says. “From using an HD camera, to working in a radio station, writing web articles, or anchoring a newscast, you learn and make your mistakes in school, instead of getting out in the real world and making the mistakes in front of a large audience. It also allowed me to find out who I was as a journalist. The education allowed me to get out, explore, experiment, and yes, make mistakes, to find out what works for me and what doesn’t.”