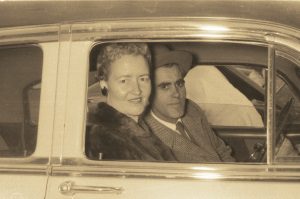 this spot in southern Alberta, and the wind is as powerful and relentless. It doesn’t take much imagination to picture what Mike Mueller and his brother encountered when they arrived from Wisconsin at the Shelby train station in Montana in the early 1900s and made their way 60 miles north to their homestead near Warner – from the endless views of the vast prairie to the capricious moods of the natural elements.

Mike Mueller came looking to make some money. Land in the new province of Alberta was cheap, ranging from $5 to $7 an acre, and there was plenty of it. “The idea of the Mueller brothers who came was to buy it, have it appreciate, sell it and move back to Wisconsin,” says Michael Mueller, who was named after his pioneering grandfather.

But Mike Mueller stayed. He worked the land and helped shape a community. He built a home that was the first in the area to have electric lights and hot and cold water from the start, thanks to wind-generated electricity. He advocated with Kate Andrews, one of the founders of Lethbridge College, for the creation of a consolidated school district. He shared his progressive views on education with his 10 children, including his son Lloyd, the uncle to Michael Mueller.

And nearly a century after he arrived, that son and his wife – Lloyd and Dorothy Mueller – would decide to continue the Mueller family legacy of supporting education by naming Lethbridge College in their wills. Their decision resulted in the largest single gift to the college in its 57-year history in October 2014. The $3.1 million donation from the estate of Lloyd and Dorothy Mueller will transform the college’s agricultural programming and shape the future of the agricultural industry in the region, province and beyond.

“My uncle and aunt wanted to find a way to advance the pursuit of knowledge through their legacy,” says Michael Mueller, who still works the land his grandfather homesteaded. “They wanted to offer a benefit and make this available to as many people as possible and they felt a gift to Lethbridge College was the best way to do that. They hoped that whatever was done with this gift, it would be just and fair and available to everyone.”

The $3.1 million gift was matched with $1.9 million from Lethbridge College to establish the Mueller Program in Irrigation and the Mueller Applied Research Chair in Irrigation Science at Lethbridge College, supporting the college as it moves to focus on data-driven productivity in agriculture. The gift will allow for new classes and training to be offered as well as for the creation of the college’s first Applied Research Chair.

“Agriculture is one of the most important industries and largest employers in our region,” says Lethbridge College President and CEO Dr. Paula Burns. “Throughout southern Alberta, agriculture is present in our everyday lives in a variety of ways – through the production of food, fibre and other products, through the expansion of agri-business and technology companies and through the impact of our agricultural manufacturing sector.

Lloyd Mueller, who was largely self-taught, was always seeking knowledge and real-world solutions during his life, his nephew recalled.

“He would try something and sometimes hit a dead end, but that is nature at work – and he would try something else,” Michael Mueller says. “That’s the entrepreneurial mindset. A lot of people overlook the fact that a building is built one brick at a time. If you can learn something, add a brick. Sooner or later you’ll be putting the last layer on and you’ll have the whole building.”

Lloyd Mueller was born on the family farm near Warner and grew up playing in the granaries and outbuildings that can still be seen today. After serving in the Canadian Air Force during World War II, he returned to Lethbridge and became involved in several business ventures, from farming to running a garage to stock trading. He achieved much of his financial success in this last venture.

Dorothy Mueller was born in Bernard, Saskatchewan. She came to Lethbridge to study to be a lab technician, but the course was delayed for several months. She ended up taking a job in hospital administration at St. Michael’s Hospital in 1948 – and worked there through her retirement in 1977. Lloyd and Dorothy married in 1954 and lived the rest of their lives in Lethbridge. They loved travelling the world together and visited all continents except Antarctica. Many of their trips were agricultural tours, and they valued learning about the work others were doing in the agricultural industry in different countries across the globe.

Lloyd Mueller died in 2009 and Dorothy Mueller died in 2013. Having no children of their own, Lloyd and Dorothy always welcomed their more than 25 nieces and nephews into their home. And while their life and work took them away from the Mueller family homestead and the labour of working the land, Michael Mueller says his aunt and uncle always valued the work those in the agricultural industry did for their communities.

“In our conversations, it always seemed that agriculture got pushed aside in favour of other technologies,” says Michael Mueller. “But the other technologies wouldn’t exist if we didn’t have agriculture. This gift will allow generations of students to be a part of that. I think my uncle and aunt would like to see that young people can do a lot of things, try a lot of things and yes, they might not all work, but if you are resilient and don’t give up, you will learn something you can apply in your future.”

Resiliency and tenacity are twin traits that Mike Mueller brought with him on his daring trip west as he built his home and legacy in southern Alberta. They are the same qualities that Lloyd and Dorothy Mueller valued in their lives, in their work, in their travels and in their beloved nieces and nephews.

As students and researchers at Lethbridge College use their own resilience and tenacity to learn and develop practices in irrigation and agriculture that bring out the best of this unique environment, the gift of Lloyd and Dorothy Mueller will continue the work to which the Muellers have been devoted since Mike Mueller first arrived in Alberta a century ago: enhancing the strengths of this fruitful land.