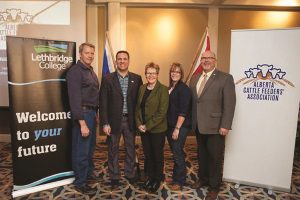 The Lethbridge College Kodiaks collected over 1,500 articles of new and gently used winter apparel including new socks, toques, scarfs and underwear in this year’s Warm Paws campaign. In addition, the athletes received cash donations of $500 from the community that was put towards purchasing additional new items for the community groups. All items were donated to Woods Homes, Streets Alive, the YWCA Lethbridge and district, as well as the college daycare.

Knud Petersen, the chair in charge of volunteers for the Alberta 55 Plus Senior Games, had great things to say about the LEO Club, whose members volunteered to help out at the games which were held in Lethbridge this year. Petersen thanked the club for its efforts and has recommended the club to other activity managers organizing events in Lethbridge.

Every year, Lethbridge College recognizes employees who have made exceptional contributions to the college through the Employee Excellence Awards. These three employees were nominated by their fellow colleagues and were honoured at the annual Employee Recognition Event on Feb. 11. Jane Anderson, instructor in Business Administration, received the “Innovation” award, Leeanne Conrad, Production Coordinator in Marketing and Communications, received the “Creating Community” award and Ken Sauter, instructor in Criminal Justice, received the “Lifelong Learning” award. Recent retirees and staff members celebrating anniversaries of their time working at the college were also recognized at the February event, which was sponsored this year by the Office of the President.

The virtual welding room located in the new trades and technologies facility at Lethbridge College will include the latest technology to enhance student learning experiences thanks to a generous gift of $50,000 from Darrell and Jody Bohle, owners of Bel-Aire Welding Ltd. in Lethbridge, the college announced in February. The new Bel-Aire Virtual Welding Room will be located across the hall from the welding booths and apprenticeship classrooms in the new facility. The room will include virtual welders, smart screen TVs and other audio visual components to allow for simulated training. Virtual welders represent the most advanced simulation technologies to train skilled workers. The simulation and sound tied to the welder’s movement will provide a realistic training experience for students at the college. The virtual welder simulates the real welding experience and requires real welding procedures – the sounds, the lights and the sparks. It allows a student to repeat a particular kind of weld, building the memory that both the muscles and mind need while practicing a technique in a safe environment. In addition, students get instant feedback on their welding and accuracy as they work toward their goal of learning to react the same way each time. Virtual welding training is not a substitute for hands-on training in an actual welding booth, but a complement to a comprehensive blended training program.

**
Staff successes a source of pride for college

Deb Hadley, Digital Communications and Media instructor and a 1997 grad of the college’s Multimedia program , received her PhD from the University of Calgary in November. She earned her degree in the Graduate Division of Educational Research and specialized in Adult, Community and Higher Education. Her thesis is titled “A Case Study of Learners in a Collaborative Post-Secondary Program: Experiences of Lifelong Learning and Social Constructivism.”

Vicki Hegedus, Chair of the School of Media and Design, earned her Master of Arts in Leadership at Royal Roads University last fall. Her thesis is titled “The Positive Influence of Successful Collegiality at Lethbridge College.” Vicki would be happy to share her thesis with anyone who would like to read it. She sends out her thanks to all of the faculty members who participated in the survey she conducted while collecting data to address her inquiry, and the contribution that made to her research.

D’Arcy Kavanagh, a former Lethbridge College Communication Arts instructor, published his first work of fiction – a murder mystery set on the French Riviera and against the backdrop of the world’s greatest bicycle race, the Tour de France. Entitled The Bastard is Dead, the novel focuses on Paul Burke, an ex-pro cyclist from Montréal who has a quiet but unfulfilling life in a village along the famed French Riviera. D’Arcy retired from Lethbridge College in 2012.

Mark Klassen, a biology and General Studies instructor was named the Prairie Baseball Academy’s Instructor of the Year. Each year the Prairie Baseball Academy recognizes an instructor from Lethbridge College and one from the University of Lethbridge. They are nominated by the students in the academy and chosen by a committee at the PBA. The award is for outstanding teaching of first-year student athletes. The instructors are recognized at the annual awards banquet in January.

Agricultural students at Lethbridge College will benefit from a new partnership with the Alberta Cattle Feeders’ Association (ACFA) that will jointly develop a business-risk management curriculum, the two organizations announced in January. The college and ACFA are developing programming that will be offered in a variety of delivery modes – face-to-face, online or blended. The highly accessible learning experiences, for both current students and industry participants, will be delivered beginning in fall 2015 as part of the Southern Alberta Cor Van Raay Agribusiness Program. The partnership will create learning experiences that focus on areas such as financial literacy, communications, currency, market tools, cycles, risk and opportunity policies, self-management and awareness, government policy and marketing, equity in the market, and will include opportunities for individual case studies.

Lethbridge College celebrated the distribution of more than $775,000 in nearly 400 individual scholarships and bursaries to students at the annual Student Awards celebration held in the fall. The college’s student awards are essential to enhanced accessibility to postsecondary studies, with many of the awards based on criteria other than academic performance including volunteerism and financial need. During the event, donors and student award recipients were able to meet and celebrate student achievement and donor generosity. Seven new awards were created this year, including the Lealta Building Supplies 50th Anniversary Apprenticeship Award; the Gallivan and Associates Award; the Hanlon Ag Centre Award; the KPS Environmental Sciences Award; the Sharon Hendrickson Memorial Award; the Meszaros International Award; and the Ken and Lorna Bateman Family First Nation, Métis and Inuit (FNMI) Award.

“We are extremely proud of the accomplishments of our athletes who are winners in our hearts as well as on the court,” says Lethbridge College President and CEO Dr. Paula Burns. “Both teams represented our college and the ACAC very well, and we value the contribution of varsity sports in the growth and development of individuals.”

The Kodiaks women’s basketball team was seeded third entering into nationals that took place at Vancouver Island University in Nanaimo, B.C. The tournament kicked off with Kodiak Ali Cameron being named CCAA Player of the Year – an award which she showed she more than deserved in the opening match when she put in 38 points in the team’s 85-52 victory over the previously undefeated Quest Kermodes. The team went on to beat the second-seeded Holland College on Friday with a score of 65-58, which put them in the gold medal game. In their final match, the Kodiaks faced defending two-time national champs Montmorency Nomades. It was a tight game but in the end, the Kodiaks couldn’t catch the Nomades and lost 63-54. The Kodiaks returned with a silver medal for their efforts – the first medal for the women’s team since winning bronzes in 2009 and 2007.

The Kodiaks men’s basketball team was seeded seventh entering into nationals that took place at Mohawk College in Hamilton, Ont. In their first match, the Kodiaks faced the second-seeded VIU Mariners and played a well-matched, thrilling game. Unfortunately, the Kodiaks were down by four, 66-62, when the final buzzer sounded. After this loss, the men’s team went on to beat the Champlain Saint-Lambert Cavaliers 89-83 and the top-seeded Holland Hurricanes 84-81. These wins put the Kodiaks in the bronze medal match where they faced the host team, the third-seeded Mohawk Mountaineers. The game started out close but finished with a blaze of great shooting and a final score of 106-92. The bronze medal the team won is the first medal for the Kodiaks since winning silver in 2011 and 1989.

The college celebrated the efforts of the basketball and long distance running teams in a campus party on March 24.

The men’s indoor track team defended its ACAC indoor title in February in Edmonton, earning 139 points as a team and capturing all seven of the indoor track men’s events at provincials, while the women took home a bronze team medal. Both teams also captured individual awards. Alex Harding earned the ACAC Runner of the Year award with Overall Grand Prix honours after winning the 1,000, 1,500 and 3,000 metre distances. Alex Andres took the 300 and 600 metre races and also received Grand Prix honours. Harding and Andres joined Evan Brown and Boaz Korir to win the 4 by 400 relay event. The Kodiaks men also won three silver and two bronze medals in addition to their first place wins. The Kodiaks women’s team won one gold medal during the women’s competition with Caylee Vogel placing first in the 300 metre race and the women’s team finished third overall. The Kodiaks indoor track coach Bertil Johansson has coached the Kodiaks men to seven ACAC cross-country banners since 2000.

Grade 11 and 12 students at Kainai High School will benefit from a new dual credit opportunity offered through Lethbridge College that means they can earn both high school and college credit for their work. In this case, two Early Childhood Education courses are open to the students.

The flexible courses are delivered through a combination of video conference and face-to-face instruction accompanied by work experience at three Head Start centres on the Blood Reserve. Kainai High School Principal and Lethbridge College alumna Annette Fox-BruisedHead has been actively involved in developing these dual credit opportunities. “We are very excited to infuse our rich Blackfoot culture into this dual credit opportunity and to be an active participant in rectifying the damage caused by residential schooling on our parenting skills as First Nations peoples,” she says. “Kainai students will always be involved in early childhood experiences either as a parent, an aunt or uncle, or as an older sibling and we recognize that they will be our future leaders and caregivers of Kainai.” In addition to the ECE dual credit opportunity, Lethbridge College is also developing a Law Enforcement dual credit opportunity in partnership with Kainai High School that will start in the upcoming academic year.