On March 28, 2010, the 90th birthday of artist John Weaver, the entire Montana House of Representatives and Senate 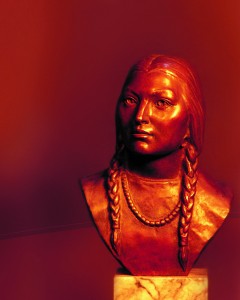 stopped their proceedings to give the sculptor a standing ovation and to sing “Happy Birthday” to him.

John Weaver was an artist worth stopping for. He was born in Montana, called Canada home since 1972, and created more than 200 non-commissioned sculptures before his death in 2012. In Alberta, he is best known for the Speed Skater outside the Olympic Oval in Calgary and the statue of Wayne Gretzky outside of Rexall Place in Edmonton. But he also created sculptures of presidents, first ladies, politicians, composers, army generals and, in 1973, a young woman from the Blood Reserve named Thelma King Murphy.

That bronze portrait bust was given by Peter Lougheed, then Premier of Alberta, to then-Governor-General Jules Leger and was displayed at Rideau Hall in Ottawa. The plaque on the bust says “Thelma King, wife of Laurence Murphy, a Blood Indian. The first of her tribe to graduate from Lethbridge Community College.”

Murphy was not, in fact, “the first of her tribe to graduate from Lethbridge Community College.”

Like so many students in the college’s nearly six-decade history, Murphy came for upgrading courses and for opportunity. After completing Math 30 and Chemistry 30 at the college in 1966, she won a scholarship as the first First Nations student to be admitted to the newly-formed University of Lethbridge, which shared space at the Lethbridge College campus at that time. It was a difficult time to be a First Nations student in Canada, Murphy recalls.

“I felt a sense of alienation being the only Native student in the university,” Murphy says. “I saw other students from the Blood Reserve, but they were all attending the college. I even withdrew after the first semester but my parents and I met with the Dean and I re-entered. I encountered racism. I just cringed and wanted to disappear into the floor when a history professor made disparaging remarks about Indians.”

First Nations students who were enrolled at the college also remember it being a challenging time. Beverly Hungry Wolf, Murphy’s cousin who was at the college while Murphy was at the university, says “attending college was a really big deal, but also a very painful ordeal. Some of the teachers and students were very racist. I got called Pocahontas. I almost failed out of school and had to rewrite an exam to pass. But a well-known girl from Lethbridge took me under her wing…her family took me in and treated me like a family member. They had good hearts.”

Hungry Wolf, who received an Honorary Bachelor of Applied Arts degree from the college in 2011 and has served as a college Elder to students in recent years, adds that “coming back to work at the college has been wonderful. It feels like Native students are such a part of the community. It’s a story that went from discrimination to pride.”

Murphy says that the alienation, coupled with the desire to help her parents financially, resulted in her taking breaks between semesters to work. During the summer break from school in 1970, she was managing the Indian Craft Store in Waterton National Park. It was there that she met her husband, Laurence Murphy, who was originally from Ireland.

“He said when he saw me behind the counter, he knew he had met his future wife,” Murphy recalls. “It took me longer to be convinced,” she adds with a laugh.

That fall, Laurence Murphy enrolled in the Radio and Television Arts program at Lethbridge College. “He was very gregarious and made friends easily,” Murphy says. “I went back to the university side of campus. I didn’t feel so alone anymore.”

Murphy says both she and her husband, who passed away in 2011, had many positive memories of their time on the Lethbridge College campus. Laurence Murphy was a well-liked announcer for the campus radio station – except for the time he repeatedly played a Yoko Ono record, Murphy recalls and smiles at the memory.

“The college created an environment that facilitated our learning,” she says. “It gave us the opportunity to explore new ideas and to actively construct our own learning experience instead of passively accepting what was prescribed by others. It challenged us to expand our perspectives.”

In the spring of 1971, Murphy was offered a job with the Edmonton Indian Affairs office and so the couple moved north and got married. They stayed in Edmonton for 15 years, where Murphy worked as a teacher and her husband worked in publishing and public relations.

While their marriage was a happy one that lasted 40 years, those 15 years in Edmonton were also marked with struggle as Murphy lost her Indian status under the law when she married a non-Indian.

According to the Indian Act, which was the law in Canada from 1951 to 1985, any First Nations woman who married a non-status Indian, a Métis man or a non-Aboriginal man lost her legal status immediately after her marriage, regardless of her ancestry. According to Leslie Latta-Guthrie, in a speech celebrating the publication of the book Disinherited Generations, which discusses this time in Canada’s history, the law meant that a woman who did not marry a status Indian could not live on the reserve where she was born, could not inherit her parents’ house or any property in her home community, could not speak up about a local issue at a band meeting, could not vote for a new chief and council, could not claim her fair share of the band’s money and natural resources for herself or her children, could not access education or health benefits recognized under Canada’s treaties with the First Nations, and could not be buried on her home reserve when she died.

And yet, Latta-Guthrie goes on to explain, under the same section of the Indian Act, any registered Indian man could marry a woman with no Aboriginal ancestry at all and his wife would gain all of his treaty rights for herself, her children and future generations of her family.

Distressed with this discrimination, the Murphys started attending Indian Rights for Indian Women Committee meetings in Edmonton to work to change this law in 1971 and “fought this unjust piece of legislation.” Along with their friends Mary Two Axe Earley, Nellie Carlson, Philomena Ross and Jenny Margetts, the group took on a long and tenacious equal rights campaign on behalf of Aboriginal women which was not overturned until 1985.

It was during this same period in Edmonton that the Murphys met the Weavers – the sculptor John and his wife Jane. Jane Weaver was the publisher of Alethia, a publication of the United Nations Association of Canada that addressed civil rights and social problems. “In 1973, Jane Weaver hired Laurence to be editor of Alethia,” Murphy says.

“We were invited to the Weavers and it was there that Jack Weaver noticed me and said he was fascinated with my Native American features, especially my eyelids.”

He asked her if she would sit for him to create a bust. “I was intrigued so I agreed. He had a studio at his house so I sat on a stool and he took pictures from every angle,” Murphy says. “Then I had to sit very still and he started sculpting. He was a very kind, respectful and gentle person. He had total concentration and worked very fast, like a true professional. I admired his talent and felt very privileged to sit for him.”

After the bust had been presented to Leger by Lougheed, Weaver contacted Murphy to share some of the feedback he had received from the premier. “The Governor General phoned him and asked who this Indian woman was because he had searched in every history book looking up my Indian name,” Murphy says. “Jack told him I was very much alive and living in Edmonton!”

The Murphys stayed in Edmonton until 1986, when they decided to move to Hawaii. They had been visiting twice a year and “finally Laurence said ‘Why don’t we just move here?!’ So when I regained my status, we made the decision to move here.” 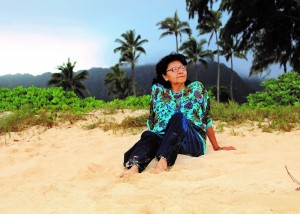 Murphy worked as a teacher in Hawaii until 2012, and she and her husband worked as professional wedding and portrait photographers as well. Murphy most recently came back to Alberta last summer to photograph her niece’s wedding and visit her family. While she loves living in the lush landscape of her island, “nothing compares to the Rockies. The mountains here have their own unique beauty with green foliage and waterfalls after heavy rain.”

She still has a small replica of the bust John Weaver created; the original was sold at auction last summer (details of the sale have not been released). While there is no denying the passing of time, Murphy’s powerful presence and intense gaze is as evident today as it was more than 40 years ago, when John Weaver met a young, intelligent and ambitious woman from the Blood Reserve and created a lasting work of art.

The plaque on the bust of Thelma King Murphy led the staff of Wider Horizons to wonder just who the first person from the Blood Reserve was to graduate from Lethbridge College. The college’s records from this time do not indicate a person’s First Nations, Métis or Inuit status, so we are asking the public for your help. If you attended Lethbridge College any time between 1957 and 1970 and are First Nations, Métis or Inuit, please email Lisa Kozleski at lisa.kozleski@lethbridgecollege.ca or call 403-320-3202 ext. 5778 to share your story in a future issue of the magazine.