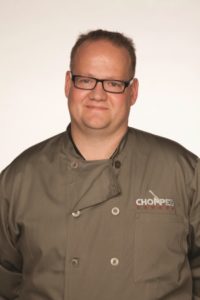 Those are the three dreaded words that contestants on the Food Network’s Chopped Canada do not want to hear. For Kieth Carlson, a ‘94 alumnus of Lethbridge College and the chef and owner of Roy’s Place in Claresholm, they were the words that came too soon in his exciting attempt to win a cool $10,000 in March on the popular show.

“I enjoyed the experience of going to Toronto and competing on Chopped Canada,” says Carlson. “Working with such a high caliber of chefs and the team that produce the program was excellent.”

Carlson started his culinary career in the little town of Bow Island, where his employer and mentor encouraged him to pursue the culinary arts. This pushed him to not only pursue his culinary education at Lethbridge College, but to further his studies to attain his Red Seal certification as a chef. “College was great,” says Carlson. “I had a great group of instructors and with the class sizes being smaller, there was a lot more one-on-one attention.”

Since the earliest days in the kitchen, Carlson had always dreamed of owning his own restaurant. In 2008, he had the opportunity to make that dream a reality when Roy’s Place, a full-service “dining diner,” came on the market. Much has changed both on and off the menu since the restaurant first opened over 19 years ago. “We took the menu right back down to 90 per cent fresh and from scratch,” he says. Among the favourites of his regulars are his famous dill pickle soup and pound-and-a-half cinnamon buns.

Carlson had owned the restaurant for about five years when some of those regulars started emailing him to encourage him to put his name up on the chopping block for the Food Network’s Chopped Canada television program. So he did.

“We filled the paperwork out and weren’t expecting too much out of it, but we got a call a week later,” he recalls. Carlson went up to Calgary, nailed the interview and was asked to showcase his culinary talents on Chopped Canada.

Producers searched far and wide for chefs equipped with skill and ingenuity to feature on the first Canadian edition of Chopped. With four chefs competing and three courses to be judged, competitors have one chance to win or lose it all. Each chef must create an unforgettable meal before time runs out. They are judged on presentation, taste and creativity. The catch? They are presented with a basket full of mystery ingredients that must be incorporated into their appetizers, entrees and desserts. The chef who concocts the most memorable meal walks away with $10,000.

In Carlson’s episode, he faced a “lunch lady” from Kitchener, Ont., a dinner theater chef from Port Coquitlam, B.C., and a daughter from Toronto looking to make her mom and partner proud. Carlson, who was labelled as the small town chef with big city dreams, created dishes for some pretty heavy hitting culinary masters. In the end, Torontonian Missy Hui was named the winner.

Those judging the dishes that were made on the fly included Lynn Crawford, a well-known Canadian celebrity chef, Chuck Hughes, the only Canadian to beat Bobby Flay in an Iron Chef competition, and Susur Lee, an internationally acclaimed chef. Carlson says he literally lost his breath when the judges were presented to the competitors. “Susur was one of the toughest critics of the episode, but they were all accommodating and great people,” he recalls.

Carlson made it all the way to the final round with what would look like an award-winning dessert: an apple crisp with a dark chocolate crostini with his mystery basket ingredients of creton, which is a Quebecois spiced onion and pork pate, breadsticks, apples and sumac, a salty, floral and citrusy spice. “I went with a ‘go-to’ dessert that I make all the time at Roy’s place,” explains Carlson. “By adding the pork fat, it makes the crumble feel sexy.”

Unfortunately the dark chocolate crostini would be the component of the dessert that got Carlson chopped. One judge in particular, Susur Lee, said it felt as though it was more of a meat pie and less of a dessert. “Not all desserts have to be sweet,” says Carlson. “My dessert is as sweet as my smile.”

Despite the stress and anxiety of the show, Carlson says he’d do it again “in a heartbeat. I’m not generally a competitive person, but it was a great way to get my culinary brain going again and see if I still had the chops to come up with something spectacular.”

In the meantime Carlson plans on “doing what we do each day at Roy’s Place, which is put out the best produced, made in-house, food between Lethbridge and Calgary.”