A group of well-versed beer makers prepares to sample the next round of homebrew, a strong ale. It is supposed to smell like a lakeside cabin, and that distinctive description carries with it some high expectations. The steward delivers the brew. And as the group inhales before taking a sip, they’re transported back to their childhoods, sitting on the cabin porch gazing at the lake. It’s a beer lover’s heaven.

In 1999, a group of likeminded beer enthusiasts came together to form the Lethbridge Werthogs Homebrew Club, and the members have been concocting and distilling memorable beverages and lasting friendships ever since.

Veryl Todd, a retired Communication Arts instructor, says they started with a group of mostly 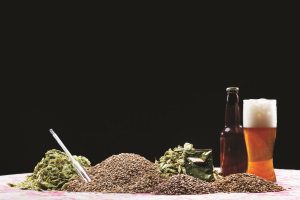 beginners who were eager to share ideas. “Over the years the club has become home to some pretty accomplished beer brewers,” he says. The club, which has always had between 15 and 20 members, includes several people with connections to Lethbridge College, including D’Arcy Kavanagh, a recently retired Communication Arts instructor, Ian Hepher, a recently retired Corrections instructor who is still teaching as a casual instructor, and Stephen Deppisch, a Civil Engineering Technology and Interior Design instructor.

Kavanagh says they meet once a month for two hours to sample and discuss homebrews and to share ideas about the process, including important topics like cleaning agents. “We’ve always made it clear to potential members that it’s not about drinking beer; it’s about making beer.”

There are two methods for homebrewing. The simplest way, which about half of the Werthogs use, is to use a kit. The other method is to do everything from scratch. These brewers boil their own grains and hops. Both techniques can produce outstanding beer.

Most of the club members brew according to their own specific tastes. Kavanagh, for example, likes stouts, dark ales and Belgian fruit beers. “I’m just a little out there in terms of concocting recipes,” he says. “Sometimes the beers turn out great and sometimes I’m the only one drinking them because they’re just a little too adventurous,” like the time he saw a beer milkshake on television and decided to try to replicate it.

The art of small craft brewing has grown tremendously in North America in the last decade. According to The Brewer’s Association, the number of craft brewers in the United States has gone from eight in 1980 to 537 in 1994 to over 2,300 in 2012. Todd says there are craft beer pubs in Calgary that have over 100 beers on tap, which is a testament to how much the beer market has evolved. “Times have changed so much that beers are now paired with food — something that used to be reserved just for wines,” he says. “Beer drinkers are adventurous and love choice and new beers.”

Some of the Werthogs’ brews are of such outstanding quality that they last well beyond the expected shelf life for beer. At a club meeting this winter, Kavanagh says Todd served a brew they had made together in 1999, which was set aside and forgotten about. “When we opened it up and gave it at the club, everyone loved it,” he says. “Now it was getting near the end, but because of its strength and alcohol content – it was probably 13-14 per cent – it tasted fantastic.”

Every March, the Werthogs host a homebrew competition. They’ve been doing it for 13 years and Kavanagh says they now receive over 100 incredible brews from across Canada to sample and judge. “If we went back to our first year, we had some pretty good beers, but the beers we get now are fantastic, and not just in the quality, but in the variety.” The judges follow standards and rules set by the Beer Judge Certification Program, which is an organization based in the US that sets the standards for each style of beer.

Todd and the Werthogs’ president, Mark Whitehead, are certified under the program. Club members judge under the supervision of the certified judges, which often include guests from Calgary. They judge the homebrews on their unique characteristics, deciphering the types of grains, hops and flavourings used.

“The quality of the beers is better every year because there are so many people in Canada in clubs just like ours — brewing their own beer and doing it very well,” says Todd. “Much of the beer we sample and judge in our annual competition — and some in our club too — is of professional quality.”

Homebrewers can’t sell their products, so only friends can sample one of the brews concocted by a Werthog member. But anyone interested in joining the club is welcome to contact Veryl Todd toddvi@telusplanet.net or club president Mark Whitehead mark@werthogs.com. Cheers!