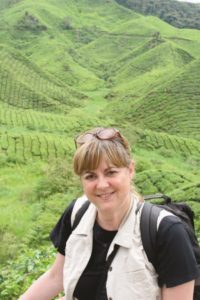 could have hoped for, including being named the best cookbook in Canada in 2002 – but it also shed light on a growing problem. “I was constantly meeting people at book signings who would say ‘It’s such a beautiful book, but I can’t cook,’” Chavich says. She realized that she could write the most beautiful cookbook in the world, “yet the average person wasn’t going to cook.”

So this tenacious 1981 Lethbridge College Communication Arts graduate set out to change that. Her next two cookbooks, The Girl Can’t Cook and The Guy Can’t Cook, focused on three themes to encourage non-cooks to brave the kitchen: sustenance (recipes for easy, everyday meals), decadence (recipes to pull off a whole dinner party), and observance (recipes to mark occasions ranging from Thanksgiving to an important football game). The cookbooks were a hit.

“I really believe people should just cook,” she says. “Find something you love – I don’t care if it’s chicken nuggets or kale – but find a way to cook that at home by yourself from scratch. Look at something in season at the supermarket, bring it home, do some research, and find a couple of ways to cook it. Getting people cooking is the most important thing.” Much of the work Chavich has done since the days she was editing the Endeavour and working nights and weekends at the Lethbridge Herald has been to further that effort, to encourage everyone to cook, eat, travel and drink well.

Chavich, an award-winning writer who now works as a full-time freelance journalist and photographer for newspapers, magazines and online publications around the world, provides deliciously descriptive stories of good cooking and good eating – most of which involve local foods. Whether she’s writing about making your own mozzarella for Maclean’s or building a better burger for CBC’s Alberta@Noon (where she was radio food columnist for many years), Chavich says her goal remains to “continue to raise the bar as one of the country’s premiere travel and food writers, and to find new publications around the world to tell Canadian stories.”

Chavich got her start at the college in part because the University of Regina – her hometown – didn’t have a journalism program. “I went to journalism school because I loved newspapers,” she says. “I still love newspapers.” And the college was the perfect place to hone her skills. “It was great to be in a small college that just focused on newspapers,” she says. “We put out the Endeavour every week and went out and learned very, very practical skills.”

After leaving Lethbridge, Chavich embarked on a journalism career that has literally taken her around the world on assignment – although she has covered food, eating, travelling, dining and wining in Alberta and western Canada more than any other region. She has had reporting jobs for the CBC and reporting and editing jobs for the Calgary Sun and Calgary Herald, where she worked as a feature writer, food editor and wine writer. She moved from Calgary to Victoria about a year ago and most recently has been writing about food and travel for Victoria’s city magazine, Boulevard, as well as freelancing for publications around the world.

She came to food writing while she was at the Sun when the previous food writer left. After volunteering to add that beat to her other duties, “I approached it like every other journalism job,” she says. “I asked a lot of questions and went and interviewed people and hung around in chefs’ kitchens and took cooking classes at night and covered everything I could to become a food expert – which I am now.”

Chavich turned to freelancing in 2000 following the “brutal” nine-month strike at the Calgary Herald. In the end, the move to freelancing has offered her great professional satisfaction, but it was a challenge. “I went from nothing – nothing – to where I am now just by working my tail off,” she recalls. “I wrote all my books during that period. I didn’t imagine I’d be writing for the Globe and Mail or Wine Spectator or Maclean’s. But I had to pitch and I had to sell myself and I was just very tenacious.”

That resolution and commitment to hard work could be noted early in her career, said D’Arcy Kavanagh, a recently-retired Communication Arts instructor and former Herald colleague of Chavich’s. “Cinda came into her first newsroom as a young reporter with a sharp mind and a strong desire to learn,” Kavanagh says. “She excelled right from the start – and continued to excel there and elsewhere. As a freelancer, she has done remarkably well in a tough field.”

Kavanagh adds that he uses two of her cookbooks and he credits her with leading him to discover where the best pie in Canada is to be found – close to home at the Broxburn Café near Coaldale. “After reading her article in the Globe and Mail about places to find great pie in Alberta, I cycled out there and tried the pecan pie,” he says. “Off the charts. I quickly got a couple of cycling buddies hooked on riding there and chowing down on the pecan pie. Now there’s a group of Lethbridge College cyclists who regularly go out there on what is now called ‘the pie ride.’ I think about Cinda every time I see that pecan pie before me.”