One night, Chef Cam Picyk’s menu at his Diyu Underground restaurant in Victoria might include a main dish 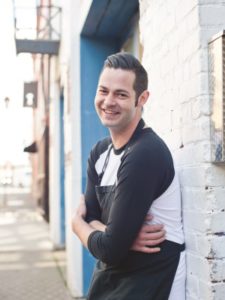 of bison with beet, blackberry, juniper and cocoa. Another night, guests will instead be offered pheasant with aged farmhouse cheddar, broccoli and brioche. A starter of green beans with devilled duck egg and wild rice will be offered one night, while another night will feature leek with lemon, lardo (a cured meat) and the herb lovage. In November, Picyk served a dessert of sesame, chocolate, pear and cloves, but back in June, when the strawberries were perfectly ripe, guests savoured a last course of strawberries with hibiscus, goat cheese and the nasturtium flower.

If Picyk’s menu sounds like no other, that’s because the offerings at Diyu Underground – as well as the location – change each time dinner is served. For five fantastic nights in 2013 and starting again in April, the 2003 graduate of Lethbridge College’s Culinary program opened up his restaurant at various Victoria locations, serving 12 to 30 guests a one-of-a-kind meal that features the best of wild and local produce in the region.

“The feedback has been outstanding and I feel like every one has gotten better,” he says. “It’s about conceptualizing dishes for that particular season and having that evolve and improve every year.”

Picyk uses his website – diyuunderground.com – as well as Facebook and Twitter to publicize the events about three weeks in advance. He takes reservations and from there, the dinners are usually sold out although occasionally last minute seats are available. He posts menus on his website as soon as a firm date is set as well as answers the most-asked questions, including “Are you a real chef or just some guy?”, “What’s with the name?” and “Dude where’s your restaurant?”

Picyk is in fact a “real” chef, who after graduation went on to work at top restaurants in Calgary; Sydney, Australia; London, England; and, most recently, Vancouver and Victoria. He says he’s “been working toward opening my own restaurant since I left Lethbridge, before I knew how to cut an onion,” he says. “But the more and more I see, the more I can tell I want to be in the right situation before I do that, and you can’t really put a timeline on that.”

The pop-up restaurant, he says, lets him try out new recipes and challenge his culinary chops.

“It’s not necessarily a model I’d recommend to become a millionaire,” he says with a laugh. “But if it’s something where you really want to explore the possibility of doing something new, it’s a huge opportunity to learn.”

Lethbridge College’s Chef Doug Overes, chair of the Culinary program, says his former student has taken an innovative and exciting approach to his career.

“Cameron has always pushed the envelope,” says Overes. “He is creative, outgoing and passionate. I think this is a cutting edge idea and I have no doubt he will succeed.”

Picyk says there are challenges – from finding a space that can be used and making sure it is properly inspected and that all licenses are in place to keeping the menu fresh. “I don’t want to regurgitate dishes I did at restaurants in the past,” he says. “But in the pastry area in particular, you have to be so exact and there is very little room for error, so I do sometimes go back to those recipes and change the flavours.”

He says he still draws on lessons he learned as a student, especially the foundational skills.

“At the end of the day, everyone needs to learn how to work clean, be organized and have a skill set,” he says. “When I was a student at Lethbridge College, I learned the nuts and bolts of how a kitchen works, how to keep it clean and organized, how to fillet a fish and chop an onion. And every single day I use those skills.”

This spring, he’ll be calling on those skills – as well as the others he has picked up in kitchens around the world – to plan the next pop-up restaurant, which will be held on April 26 at the Victoria Public Market. He hasn’t decided on his menu yet, but Picyk knows it will “celebrate the culture of Vancouver Island with a hands-on approach.” He also knows he’ll be using the best produce and products he can find in his new hometown – as well as more items from his own garden.

To find out when Chef Cam Picyk will open Diyu Underground in Victoria next, check out his website at diyuunderground.com or follow him on Facebook or Twitter.
Cam Picyk’s recipe for Mac and Cheese