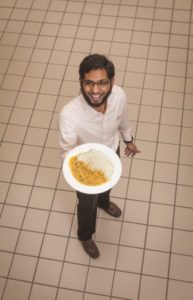 as passionately as he talks about Indian politics and the economic situation of countries around the world.

“I grew up in India in the city of Hyderabad, which is very famous for its food,” he says, describing succulent meat and rice dishes that are often cooked at low heats for many hours. “The Hyderabadi cuisine has many influences,” he adds, including the cuisine of Persia, Mongolia and Turkey, as well as the cooking done by royal chefs for the kings of centuries past.

Raqeeb says one of the most famous dishes of Hyderabad is biryani, which can be made with chicken, beef, veal or lamb. There is a saying in Hyderabad that cooking patiently is the key, so the biryani he enjoys at home starts with the marinating of the meat with spices overnight and then soaking the meat in yogurt before cooking. “We have a unique way of preparing biryani,” he adds, describing how the meat is placed on top of fragrant, long-grained basmati rice and cooked over steaming coals. The dish is sealed with dough and simmers gently over a low fire, which increases the absorption of the aromatic spices.

“The instructions must be followed precisely,” he says, and when they are, a truly memorable meal is created. “When you do, it is the most delicious meal you can eat. If the biryani is prepared by your own enemy, you can forgive him… it is that good.”

In Lethbridge, Raqeeb is more likely to make a meal of dal, a lentil soup which “can be prepared by everyone and eaten many times a week. It is a very common food that does not take much time to make.” In southern India, dal is usually eaten with rice, while in northern India, Pakistan, Bangladesh and Nepal, dal is eaten both with rice and with roti, a wheat-based kind of flatbread. His favourite recipe for dal includes tamarind juice, which is another hallmark of Hyderabadi cuisine and provides a blend of sweet and tangy or sour flavour.

“Anywhere you go in India, whether it’s in a five-star hotel or a cheap restaurant, you’ll find dal on the restaurant menu,” says Raqeeb. “It’s a common staple food – and it’s delicious.” Before coming to Lethbridge, Raqeeb worked as a restaurant manager for Silver Spoon Takeout and Catering, based at the head office in Mississauga. There, as part of his studies, he learned about restaurant management and the business of catering, and he spent plenty of hours in the kitchen.

“I learned many skills while working at Silver Spoon,” Raqeeb says. “They trained me for everything as part of my studies. I learned how to manage and lead the workforce, and I learned theory but got to apply it in real time. I learned how to perform under pressure – it was a very busy restaurant.” Raqeeb says after he completes his studies at Lethbridge College, he plans to return to India for a holiday and then come back to Canada to continue his management studies and one day work and travel around the world.