They felt like they were walking uphill everywhere they went. They missed hot showers a little and 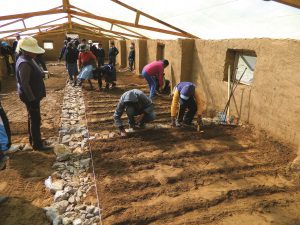 their young sons a lot. But Lethbridge College students Constance Day Chief and Darcie Doore say they’ve never been happier than they were last summer. That’s when they were building a greenhouse where school children could grow vegetables year-round in a high mountain village in the Andes of Peru.

“We weren’t just there to build a greenhouse,” says Day Chief, who grew up on the Blood Reserve and is in her first year of the NESA Bachelor of Nursing program. “We wanted to help the people in the village so they could keep it going.”

“There was lots of community involvement,” says Doore, who is in the second year of her General Studies program and also grew up on the Blood Reserve. “It is their greenhouse, and they worked to include the village in as much as they could.” Day Chief and Doore were two of four Lethbridge College students who travelled to the Yanico-Cuturi community of Arapa, a village located in the Azangaro province of Puno, Peru, last July. They worked with a group from the village to prepare the foundation, dig up and prepare the soil and put the roof on. The following week, a group that included Lethbridge College NESA Bachelor of Nursing student Tia Franiel and Criminal Justice student Tessa Staples planted the food, hung the door and placed the sign.

The students learned about the opportunity from Lethbridge College microbiology instructor Thomas Graham, who has been partnering with Centro de Investigación de Recursos Naturales y Medio Ambiente (CIRNMA) in Peru since 2011 to help construct two 20-by-60-foot greenhouses at rural schools and several family greenhouses located in the Andes in villages that are often 4,500 meters above sea level.

“There is no better feeling than knowing you are helping your students become global citizens and improving somebody’s life with something as simple as a vegetable,” Graham says. The work of the students ensures that primary schools in Peru have adequate year-round food for their lunch programs, including tomatoes, carrots and cabbages.

Day Chief and Doore were in Graham’s microbiology class when he mentioned the opportunity. As soon as they were selected, they started studying Spanish and preparing for the trip. The four students received financial assistance from a student association fundraiser last March, and Day Chief and Doore also received support from Red Crow Community College.

Day Chief and Doore left their sons, then aged three and four, with their families so they could make the trip. While leaving them behind was difficult, they knew their sons were in good hands and that this was the kind of opportunity they should seize. “Sometimes even now it’s like, ‘Wow, I can’t believe we did that,’” says Day Chief.

“We really connected with the people in the village, especially the children,” says Doore. “We played a lot of sports. They schooled us in volleyball, but we beat them in basketball.” The friends say they’d love to return to Peru on their own one day, and that the experience changed their own plans for the future. “I want to keep travelling,” says Doore. “It makes you realize that if you can incorporate those types of experiences into your life, you can make a difference.”

Day Chief, who kept a journal of her time in Peru, wrote that “I did not think it was possible to make a connection with people in that short amount of time, but I did, and not a day has gone by that I don’t think about my time at the village. …I want others to know and realize what a big world it is out there, and how much going to school and getting an education opens a window of opportunities.”

Graham says he plans to take another group of students back to Peru in 2015 to help in the construction of another school greenhouse.