Even college presidents need help from the folks in IT before they can truly get to work. 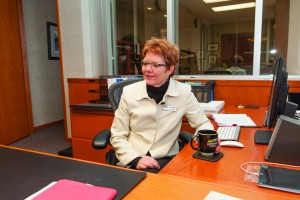 That’s what Dr. Paula Burns, Lethbridge College’s new president and CEO, found the first morning of her first day on the job in February.

Her first visitor was Travis Killian, an IT supervisor and member of the college’s Board of Governors, who came to set up her system, pass along the necessary adaptors and make sure her computer was connected to the printer.

Once all of that was in place, Burns thanked Killian for his help, sipped her coffee from a Lethbridge College mug and gazed out the broad expanse of windows in the President’s Office. She looked at ease and ready to go.

Burns’ first week on the job was packed with meetings and greetings, listening and learning. While the days were filled with dozens of new faces and countless pressing topics, she took it all in calmly, asking questions and making connections, laughing and smiling even as the meetings wore on.

In many ways, Burns’ first week looked similar to the first week many people have in a new job – discovering where to park, figuring out which keys open which doors and meeting with HR to learn about benefits. But in other important ways, the work Burns accomplished her first week on the job provides a glimpse into the priorities and leadership style of the college’s newest president.

In all of her interactions, Burns, the college’s eighth leader in 56 years, talked about the importance of collaboration and innovation, and she questioned how Lethbridge College does and can continue to excel in both of these areas. The week and her work started early, on a warm winter morning as a soft southern Alberta wind blew the branches outside of her office and a new college president got down to work.

Joyanne Mitchell, manager of development and alumni relations, and Lana Walsh (Information Specialist ‘96), the college’s special events and program coordinator, sat in the waiting area of the president’s office, eager to discuss some exciting plans in the works for the college community.

Mitchell said she was looking forward to talking with Burns about developing partnerships and building relationships with some of the college’s key collaborators, while Walsh wanted to outline ways to use the college’s events to engage with its partners and showcase innovative program areas. The big events of the year – the new “Night to Remember” in May, the golf tournament in September and the wine auction in November – are all great occasions to celebrate with alumni, industry and community partners. They also provide the opportunity to raise awareness about the college’s important fundraising efforts, such as student awards, the Trades and Technology Renewal and Innovation Project, and the Library and Learning Innovation Project.

Mitchell and Walsh made their way into Burns’ office and sat down with the new president and Leclaire. The quartet got to work quickly, discussing dates, events, priorities and plans.

“Does this work well for the students?” Burns asked when discussing a possible shift in dates for one event. “We want to be showcasing our culinary students and make sure it works for them.”

Communication Arts students Michael Johnston and Mark McCue came prepared for their video assignment. The camera, the microphones and the notebook with questions were in place, and the students got down to business as soon as Burns arrived in the alcove outside of her office. Johnston started his interview by asking Burns why she wanted to join the Lethbridge College team.

It was, simply put, too great of an opportunity to pass up, Burns replied. The college already had a good foundation in place, and she could see that her leadership style and experience would make for a good fit. “I noticed right away the huge support of the community, too,” said Burns. “I don’t have to start from scratch.”

When Johnston asked about the areas Burns would likely focus on first, she wove in details from conversations she had earlier in the day about the new trades and technology project.

“I’m excited to bring out the best in everyone here,” she replied to one of Johnston’s final questions. “I look forward to seeing everyone shine.”

The students then filmed Burns walking through Centre Core, saying hello to people in the hallways and stopping to chat with the staff in the recruitment office. It seemed fitting that Burns’ last formal appointment on her first day on the job included students – those who were gaining real-life experience by putting the theories they learned in the classroom into practice. Providing the opportunity for hands-on experience, after all, is what the college does best.

The second day on the job started early. Burns had a meeting with the college’s leadership council – a group of about a dozen deans, department heads and administrators from across campus who collectively provide leadership to the college. The conversation was quick and varied, ranging from bids and budgets to deadlines and goals.

Some of the goals Burns outlined included “learning Lethbridge College” and developing an understanding of the culture on campus. She also told the council that she’d like to build leadership teams and find ways to connect as leaders. In addition, some other goals included determining and developing her relationship with the Board of Governors, with community partners and with government leaders. She also spoke of her plans to focus on the goals and plans already in place, such as those in the college’s Comprehensive Institutional Plan.

“I’ve got lots to learn,” Burns told the council. “I’m taking notes, keeping a reflective journal every night about needs and progress.”

To help her in her quest to quickly gain insider knowledge of the college, Burns asked the council to work collectively to create a list of all she needs to know. Using yellow sticky notes, the council brainstormed alone and then in small groups as Burns took notes and talked with Marcellus-Kerr, who as executive assistant to Edwards and Leclaire has accumulated a wealth of experience and insider knowledge herself.

Some of the responses from the council were serious – the college needs to make sure that the Comprehensive Institutional Plan links to daily operations. Others were great observations – that people really enjoy working at Lethbridge College and are quite skilled at what they do. Still others might have seemed less significant at first but actually reflect an important part of campus culture – that staff members love “blue jeans” Fridays.

“It’s a way to learn the what and the how,” Burns explained. “It’s a way to quickly find out what’s working, what’s not, what people are curious about, and what are the most important things people want me to know.”

She left the meeting with a long and insightful list.

More than 60 Lethbridge College staff members gathered in the Garden Court Restaurant for the college’s Management Forum meeting, a chance for a larger group of managers and leaders to meet and discuss issues important to the college community.

After asking the members to introduce themselves and tell her something they like about working at the college, Burns talked a bit about her leadership style, which is highly collaborative.

“I want people to be working in their areas of strength,” she said. “I look for opportunities for people to contribute in the highest possible way. I do a lot of informal walking and talking, and want to set up opportunities to engage the whole community, including students.”

Burns’ first week gave her a glimpse of some of the broader responsibilities of her new job as president. In addition to leading the college in Lethbridge, she is also an important contributor to provincial conversations about higher education, job creation and trades training. Even in her first week she has been asked to network with other postsecondary presidents and to meet with provincial and national organizations to discuss the role and future of colleges.

In other words, Burns’ third day on the job had started with an early morning drive to Calgary for two days of meetings.

On her agenda were appointments with the eCampus Alberta Board of Directors, meetings and conversations with the Council of Presidents of the Alberta Association of Colleges and Technical Institutes, as well as a reception with the president and CEO of the Association of Canadian Community Colleges.

“It was great to connect so quickly with other post-secondary presidents,” Burns said.

The last appointment of the day for Burns’ first week was an interview with Caroline Zentner (Print Journalism ‘00), the education reporter from the Lethbridge Herald. They gathered in Burns’ office, which was now filled with plants and flower arrangements sent from well-wishers and was shimmering in the golden afternoon sun.

Zentner asked if the first week had been overwhelming, and Burns smiled. It was full, she said, but had the right pace and right amount of information.

Burns talked about her meetings in Calgary and told Zentner that she saw the naming of a new provincial minister for enterprise and advanced education as a “real opportunity” for the college. The work students and instructors do in the college’s 50+ programs and apprenticeships supports the premier’s agenda to develop more applied research opportunities, she noted.

Zentner asked about some of her plans for the college.

At the end of the interview, Burns thanked Zentner for coming by. She then took a deep breath and returned to her computer.

As the sun fell beyond the coulees outside of her office, she continued the work of a president. Her first week was almost over. But her work – like her story – was just getting started.