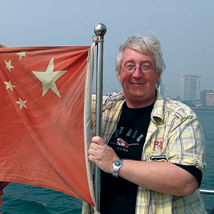 Jinan, China, is called the “City of Springs” and teems with a population of around seven million people. The capital of the eastern province of Shandong is located about 390 kilometers south of Beijing and never shuts down. But the continuous flurry of activity that takes place here each day has become commonplace to Lethbridge College alumnus Scott Greer (Communication Arts – Broadcast Production), an English teacher at the Jinan Foreign Language School.

Heralding from Coleman, Alberta, Greer is certainly a long way from home. After receiving his diploma from Lethbridge College in Communication Arts in 1992, he started his career in broadcast production. After years in the industry and experimenting with other lines of work, Greer was encouraged in 2010 by his 15-year-old daughter to go to China.

It didn’t take much encouragement. “I had always wanted to travel to Asia,” Greer says. “When the opportunity presented itself I made the decision to come.”

Now, he starts his day at 5:30 a.m. and catches the morning van supplied by the school for him and the other teachers at 7 a.m. to arrive at school in time for his 8 a.m. class. He teaches English as a Second Language and works primarily with 12- to 14-year-olds on spoken English and grammar. After he’s done with his classes, he takes the 40-minute ride home, settles back into his teacher’s residence, plays “catch up with the West”, and works on teaching materials.

Four days out of his week, he spends the rest of his time tutoring students – whose days seem especially long as they run from 8 a.m. to 5 p.m.—at his apartment.

On his off days and holidays, he travels to cities such as Beijing, to festivals around the country, and to smaller centres such as the coastal city of Qingdao, which runs daily ferries to South Korea and is the home of Tsingtao, China’s National brand of beer.

It’s not all about festivals and fanfare though. Living in Jinan has its own set of challenges. For example, being an English teacher in China demands a great deal of creativity to bridge the language barrier. Greer admits that being in a classroom where you sometimes have to use charades to get a point across can be difficult. “That doesn’t happen often,” he says, adding, “but the wannabe actor in me [comes] out to play then.”

Keeping strong ties to back home also helps to make life in China a little less arduous. Greer says that “managing to keep in touch with Canada and accessing English resources makes it much easier to adapt to life here.” He uses Twitter, email, and chatting programs on a daily basis.

Greer’s ties to Lethbridge College have also helped him connect with his students in a valuable way.

“It showed me that a variety of different teaching techniques could be used to get the results that are required,” he says. “Something I use daily is being able to enunciate clearly. Those skills that were passed on get used constantly as I work with my English students since it is an ESL program.”

Greer can see the difference he’s making in the lives of students. There’s satisfaction in “seeing the look on someone’s face when they nail a pronunciation that they have been working on,” he explains. In the end, Greer notes that the feeling of respect he gets is something he never expected. “A ‘thank-you teacher’ speaks volumes,” he says.

Jody Alston (Travel and Tourism ‘91), an ESL teacher from Lethbridge College, can also attest to that sense of satisfaction. An experienced ESL teacher who worked in Korea, she made the move to teaching at the college in 2002 and has enjoyed her work here.

“Living in a foreign country has many benefits,” she says. “You gain a greater insight into what it means to be a Canadian and a part of the global community. It makes a person more adaptable, flexible and open minded.”

Both Alston and Greer also agree that researching your destination is the best advice for someone wanting to teach ESL abroad. “I would recommend that you do your homework,” says Alston. “If you find a school that is hiring, talk to someone currently employed and see if that person would recommend it.” She also suggests taking a Teaching English as a Foreign Language class to help give direction about methods and practices used in teaching English. Alston says she does sometimes miss Korea. “It was an adventure and exciting,” she recalls. “The social life is fantastic. I heard once that it’s like being a university student but with money – and no exams.” Still, Alston admits, “I love my students here at the college.”

It’s that same sense of satisfaction Greer has found in his work and life in Jinan that may keep him there for a while. But while he revels in the changes he sees happening in his new home, he does miss Canada, too.

“One thing I really miss is a Tim Horton’s double-double” he says. “I sometimes miss the mountains and the pace of life. Life can be very fast here. Feeling like you need to be two places at once is different.”

But it’s that flurry of activity and those seven million lives that are swirling around Greer that are keeping him rooted.

“I enjoy life here,” he says. “I love the people. They are incredibly nice and will do what they can to help whenever possible. Seeing new places, riding the bullet train to Beijing, standing on the Great Wall and in Tiananmen Square – it all makes me want to see more.”

Try Teaching English as a Foreign Language (TEFL), a 40-hour intensive non-credit course taught here at the college. The field of Teaching English as a Foreign Language involves teaching English in countries where English is not the primary language. TEFL has grown dramatically into an interesting and exciting career as people around the world strive to become proficient in English, an international language of communication, information, education, business, trade, technology and travel. For more information, go to: www.lethbridgecollege.ca/conted