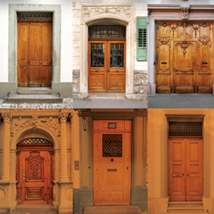 From rural Alberta to the United Nations, alumnus Drew Donovan carries the lessons learned at Lethbridge College with him wherever he goes.

Drew Donovan is living the kind of life where one week he is answering emails from the market square of old town Prague and the next week he is working from his Switzerland office planning safety and security measures for a major event in China.

He has moved seamlessly from small-town Alberta to the professional hockey arenas of Germany to the streets of Toronto, where he worked as a police officer for 11 years. Since 2000, he has worked in a variety of roles dealing with safety and security for the United Nations Security Management System and is now based out of Geneva, although he has travelled to more than 80 countries on the job. The ’87 grad of the Business Administration program at Lethbridge College works in an incredibly diverse culture with colleagues from approximately 152 different countries.

It all started at the southern Alberta campus where Donovan arrived as a student in 1985. He had worked in the heavy equipment industry for a few years after high school and decided that kind of work was far from his ideal job. His twin brother had studied criminal justice at the college and would go on to work for the RCMP. Donovan thought he might like working in marketing (“my dream job at that time was to become a marketing rep for Labatt Brewery,” he recalls) and he decided Lethbridge College was the perfect place to start the next chapter of his life.

That move from his family’s farm in Foremost proved to be the first important step to a life filled with challenging and rewarding work around the world. “For me, higher education is the one thing that opened the doors,” says Donovan, who juggled his studies with competitive hockey. He also started to travel internationally while he was a student, taking part in a student working abroad program in London, England, in 1986. It was during this period, he recalls, that he decided “this southern Alberta boy needed to see not only the rest of Canada, but also the rest of the world.”

So after receiving his diploma, Donovan moved to Germany and played professional hockey from 1987 to 1989 in two Bavarian cities, Erding and Bad Reichenhall. After returning to Canada, he enrolled in the Ontario Police College, receiving his diploma in 1990. He was hired by the Toronto Police Service that same year, and worked in jobs ranging from a uniformed officer walking the beat to a Detective Constable specializing in organized crime, intelligence gathering, and criminal death investigations. At the same time, he had enrolled in the University of Western Ontario and earned his BA in Criminology in 1996.

In 2000, he started working for various branches of U.N. organizations, spending time in places like Kosovo, Guinea, Sierra Leone, Ivory Coast, Liberia, Afghanistan, and Nepal. Today, his title is Senior Security Officer and he is currently in charge of the Safety and Security Coordination Service for the World Intellectual Property Organization (WIPO), a U.N. specialized agency headquartered in Geneva. He explains that “essentially my job is that of a threat and risk manager. It is my responsibility to determine the most appropriate structures, policies, and operational procedures to ensure the safety and security of all WIPO staff, information and assets.”

He lives in a nearby French town of about 6,000 inhabitants with his wife, Muriel, and their two sons. He says he loves the French countryside, the lakes, the mountains, the French cuisine and the wine. Although he appreciates seeing so many different parts of the world and thoroughly enjoys his job, “my main priority now is to be close and a part of my children’s educational upbringing as these early formative years go by much too fast.”

Donovan also knows that college years go by quickly, too, and he remembers them fondly.

“My time at Lethbridge College was great,” he recalls. “I met a lot of interesting people and some of those friendships are still there.” He worked as a student staff supervisor at the Barn and remembers it as a great gathering place. In the classroom, he recalls two instructors in the Business Administration program as being particularly memorable – Dave Kennedy and Pat Webb.

“They were not only good teachers in knowing the subjects they taught, but they were just real good people, too.”

“He was one of the first people I met when I moved to Lethbridge in August 1985 to teach at the college,” Kennedy recalls. The two were on an airplane to the Ball Hockey Nationals in Winnipeg – Donovan playing for Alberta and Kennedy playing for Manitoba, the home he had left a week earlier.

“I found out that he was to be in my class starting the next week,” Kennedy recalls. “He was a great student and very nice guy – he invited me to play on his winter hockey team right away. Drew was very much responsible for my first good feelings about moving to Lethbridge.”

Kennedy recalls that Donovan was “a real leader” on the hockey team and helped lead the team to the playoff championship that year.

“I mostly remember him as a very friendly, level-headed guy that you just knew was going to be successful in whatever he did,” Kennedy recalls. “I always wanted to thank him for welcoming me to Lethbridge.”

Donovan said the college experience was important for him – “it gave me the confidence to go out and do something different than I had imagined before” – and it is something that he now looks for when hiring employees.

“One thing about college and university life is that it brings a little bit of independence,” says Donovan. “When you are successful at obtaining a diploma or degree, you’ve proven you can start something and have the discipline to be able to finish it. As a hiring manager now, I see people from all walks of life. A diploma is a first litmus test. Can they discipline themselves to start something and then finish it? Because once that’s done, it opens doors to wherever you want to go.”